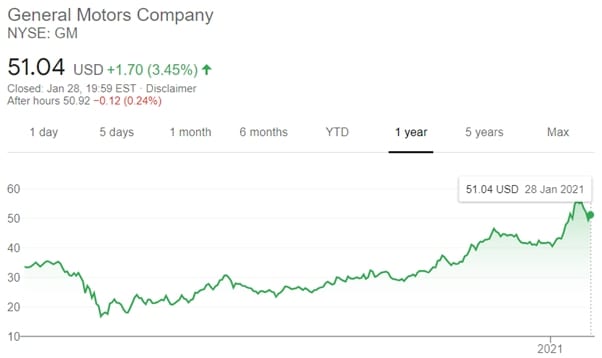 The public commitment to putting a firm timeline on the transition an all-electric future from one of the biggest, and most historical automakers in the world is a milestone marking the end of the road for the combustion engine. At least in the context of mass-produced vehicles. Ms Barra said GM wanted to “set an example of responsible leadership in a world that is faced with climate change”.

General Motors’ transition to an all-electric footing will be far from a minor endeavour. Of the 2.55 million vehicles GM sold in its domestic U.S. market last year, only around 20,000 were electric vehicles (EVs). However, the company has promised to launch as many as 30 EV models by 2025, which would be expected to drastically change that mix.

GM took its first big step into the electric delivery vehicles segment with the launch of its Bright Drop electric van model. It is also investing in autonomous vehicles start-up Cruise alongside Microsoft. GM acquired a majority stake in Cruise five years ago with an investment that topped $1 billion. In November, GM committed to a total investment of $27 billion in electric and autonomous vehicles over the next five years.

It’s the start of a long journey towards GM’s 2035 target to become a zero emissions automaker. The press release issued last night included the further ambition for GM to achieve full carbon neutrality by 2040. That would mean even the manufacturing process of its vehicles, and its supply chains, achieve carbon neutrality, as well as the vehicles rolling off the production line being zero emission.

“It is understood that we will need to reduce the net impact of carbon emissions from all human activities to zero by 2050. As one of the world’s largest automakers, General Motors seeks to lead our industry and our world toward those goals.”

GM’s share price hit record highs earlier this month after rising by a third. GM has been a public company for a decade. Public companies are being placed under increasing pressure to up their commitment to reducing their carbon footprint. This week U.S. asset manager Blackrock, considered the world’s biggest investor, warned companies that failing to do so could see their stock blacklisted from its actively managed funds.

In addition to market pressures, automakers also face the prospect of regulatory intervention, forcing them to reduce their environmental impact. Gavin Newson, California’s governor, has said that the state itself intends to ban the sale of new petrol and diesel-engine cars and trucks by 2035. The UK government recently committed to the same timeframe.

US stocks cap worst week since October on Reddit development

Asian markets to open mixed on concerns over...

MSCI’s broadest index of Asia-Pacific shares outside of Japan dropped to 684.52, its lowest... END_OF_DOCUMENT_TOKEN_TO_BE_REPLACED

The spot price of gold reached $1,600 territory for the first time since June... END_OF_DOCUMENT_TOKEN_TO_BE_REPLACED

Alba Mineral Resources believes there is still a rich deposit of gold around the... END_OF_DOCUMENT_TOKEN_TO_BE_REPLACED