Gains may not have been on the same level as in vogue Tesla, but the General Motors share price has had a positive 2020, despite the Covid-19 pandemic. The Detroit automaking giant’s value is up 18% this year and is approaching its record high of 2017. 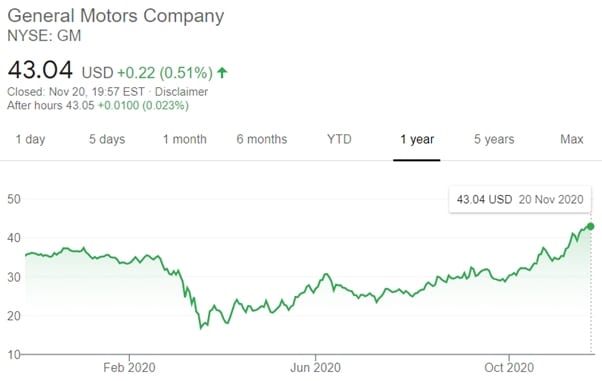 Compared to Tesla’s 485% share price gain, that’s small fry. Tesla’s valuation also now easily outstrips GM’s at almost $465 billion compared to $61.6 billion as of the market’s close on November 20th. But there is plenty cause for optimism at GM. The much older company (GM was founded in 1908 and Tesla in 2003) has turnover that is many multiples that of its new rival – $137 billion in 2019 to Tesla’s $24.6 billion.

Tesla’s popularity with investors is considered a stock market bubble by many analysts. Even if most now accept the company has a bright future, it is hard to see why the electric car and battery maker is valued so highly compared to traditional automakers. The argument is the future of vehicles is electric, and Tesla is the best at electric. Or is it?

GM itself is now staking its future on developing a new generation of electric vehicles. The company will release 30 EV models, far more than Tesla, over the next four years. The new all-electric models will include many of GM’s most well-known cars, including the Cadillac and even the tank-like Hummer. But there will be electric versions of pretty much every size and shape of the models GM is known for, from family-friendly saloons to pick-up trucks.

Chief executive Mary Barra last week announced an acceleration of the planned rollout of electric models and all 30 will now be in production within 4 years, commenting:

“Climate change is real, and we want to be part of the solution by putting everyone in an electric vehicle.”

A battery factory almost as large as Tesla’s Nevada ‘gigafactory’ is being built in Lordstown, Ohio and new assembly lines also being invested in. A total of $27 billion is being invested in the company’s sharp pivot away from traditional petrol and diesel combustion engines.

“We could have kept producing everything we’re producing. We’re making good profits, but that’s not where the future is. We are putting our full force into being a zero-emissions company. We’re making a right turn.”

Of the giant traditional automanufacturers, on Germany’s Volkswagen is embracing the electric future on a level comparable to that of GM’s new direction.

For investors, the big question should be “if Tesla is worth so much because markets see the future of automobiles as belonging to electric specialists, what is the potential for GM as an EV-focused manufacturer”?

By revenues and profits, GM is by far the bigger company. In the most optimistic scenario, it will take Tesla years, if not decades, to get close to the manufacturing capacity of GM, which also has economies of scale when it comes to supply lines. Yes, production lines and supply lines need to be converted for EVs, but GM’s starting base surely gives it an advantage?

The only big question is how ‘good’ the market rates GM’s electric models. If their quality is considered on par with Tesla’s models, or even close, GM and Tesla’s valuations should be much closer again within a few years. If its pivot to electric proves a success, it’s far from impossible to see GM as the more valuable company again within 5-10 years.