The GSK share price has had a muted reaction to news today the London-listed pharmaceuticals giant is to acquire American biopharmaceuticals firm Affinivax. The deal for the privately held Boston-based Affinivax will strengthen GSK’s pipeline of next-generation vaccines and will bolster New GSK, the pharma business that will remain after a planned demerger of GSK’s consumer goods business. The unit is to be spun out as an independent listed company under the name Haleon.

The Affinax acquisition will be the largest in the vaccines sector since 2014 and represents a major investment in New GSK ahead of the demerger, giving it access to a new class of treatments for diseases including pneumonia, meningitis and a variety of bloodstream infections. Affinivax will cost GSK $2.1 billion upfront with another two payments of $600 million due once various milestones have been passed by therapies the American company has in development. 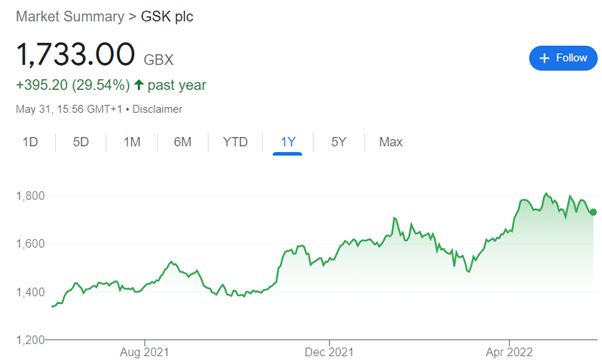 New GSK has set itself a mid-term target for 5% growth in sales and 10% in operating profits, which are targeted to reach £33 billion by 2031. The company’s current vaccines business generated £6.8 billion in 2021 and Affinivax’s pipeline will give access to a market analysts believe will be worth $9 billion by 2026.

However, despite the fact the deal looks like both a good prospect and fit for New GSK, the still combined company’s share price has gained just 0.3% today. However, the company’s valuation has gained 8.5% this year so far despite the tough environment for equities, and is up almost 30% over the past 12 months.

Affinivax was founded in 2015 and its early investors included the Bill and Melinda Gates Foundation which put up $4 million. It has developed a technology called MAPS which bolsters the immune system against a broader range of bacterial strains than existing jabs.

The start-up’s most advanced vaccine against bloodstream infection is AFX3772, which is currently in phase two trials. It includes 24 polysaccharides and two protein antigens, surface components that provoke an immune response. The most popular vaccine currently on the market, the Pfizer-manufactured Prevnar, contains a more modest 20 serotypes.

The vaccine candidate is expected to enter Phase 3 development for adults in the short term and Phase 2 for children by the end of the year. Children account for 75% of the market.

There will, however, most likely be greater competition for Affinivax’s candidate vaccines that there is currently with France’s Sanofi and Merck from the USA also investing in research and development in the field. Despite that risk, Morgan Stanley commented in a note to investors that it feels the deal represents

“a positive step forward for the GSK vaccines pipeline, adding optionality and differentiated / disruptive technology over and above a multi-blockbuster opportunity.”

“GSK’s significant capabilities will enable continued advances with MAPS to improve existing vaccines and develop vaccines that combat novel and resistant infectious diseases for which there are no effective immunisation strategies available.”

Haleon is to be spun out as a stand-alone company in July, leaving New GSK to focus on its core pharmaceuticals and vaccines business. It will also have more financial firepower to make major acquisitions such as that of Affinivax.