The share price of mining and commodities trading giant Glencore has fallen 2.6% today despite the company announcing a record underlying profit for the first half of the year. And that it will return $1.2 billion to shareholders between a $500 million special dividend and buyback of $650 million of shares. That’s on top of the $1.6 billion dividend for this year previously announced.

Glencore posted a net profit of $1.3 billion for the first half of the year, a new record and a welcome bounceback from the $2.6 billion loss posted for the same period a year earlier. The loss a year ago was the result of write downs of the values of a number of assets while higher commodity prices over the past several months led to the outsized profit this time around. 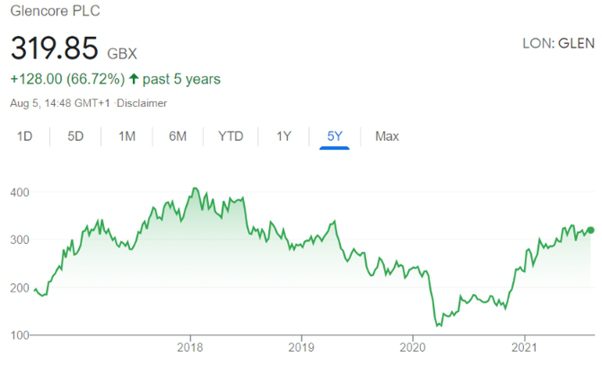 However, despite the positive report the Glencore share price has been hit by a wider run on the mining sector today caused by an overnight drop in the price of iron ore. Glencore is not highly exposed to iron ore, only marketing it for third parties, but still appears to have been caught up in a general sell-off of miners.

Adjusted earning of $8.7 billion before interest, taxation, depreciation and amortisation were also a record and represented 79% growth on the previous year. Just under $2 billion of that total was generated by Glencore’s trading business and slightly down on the previous year when traders benefitted from volatile oil prices.

Higher prices for industrial metals and other commodities drove earnings from minings up 150% to $6.6 billion. The company’s new chief executive Gary Nagle commented:

“Following Covid-19’s severe global impacts in early 2020, the subsequent economic recovery has seen prices of most of our commodities surging to multi-year highs amid accelerating demand and lingering supply constraints. Fiscal and monetary stimulus, successful vaccine rollouts and increasing momentum in relation to decarbonisation of energy systems should continue to underpin sector sentiment going forward.”

Switzerland-based Glencore is one of the world’s biggest commodities traders and its own mining operations are most concentrated in coal, copper, zinc and nickel.

One cloud on the horizon for investors is five independent bribery and corruption probes being made into Glencore in Switzerland, the UK, USA and Brazil. A former Glencore employee last month pleaded guilty in the USA to violations of the Foreign Corrupt Practices Act. Prosecutors accuse him of a role in bribes made to Nigerian officials in return for attractive terms on contracts in the country.

Legal-related costs came in at $216 million for the half year compared to $56 million a year earlier. The company declined to comment on when it thought investigations might conclude or to estimate liabilities that may be incurred.