The Glencore share price has risen slightly today despite a ruling by U.S. authorities yesterday that bribery was “built into the corporate culture” of the London-listed mining and commodities giant. Glencore, the ruling found, ran a “staggering” bribery operation that saw it pay out over $100 million in bungs across South America and Africa. The company was also found to have manipulated American fuel markets.

Glencore will now pay fines totalling around $1.5 billion. $1 billion will be paid to American authorities and another $40 million will settle bribery allegations in Brazil. The other $460 million is the estimated cost of fines that can be expected to be issued in the UK after the Serious Fraud Office (SFO) made seven charges against the company yesterday. The exact scale of penalties is expected to be determined at a court hearing scheduled for June 21. 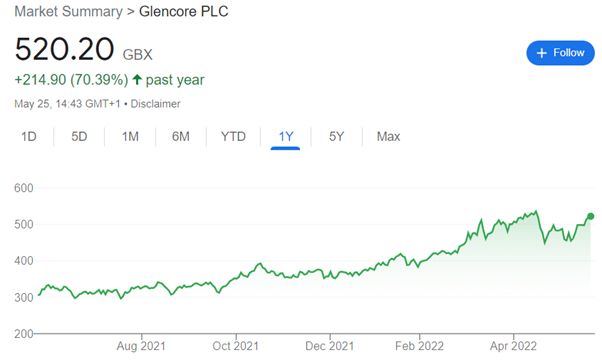 In the UK, the SFO claimed its own investigation had uncovered what it described as “profit-driven bribery and corruption across the company’s oil operations in Cameroon, Equatorial Guinea, Ivory Coast, Nigeria and South Sudan”. It added:

“Glencore agents and employees paid bribes worth over $25 million for preferential access to oil, with approval by the company”.

As one of the world’s biggest commodities trading and mining companies, Glencore has benefitted hugely from surging commodities prices over the past year. It banked $5 billion in net profits in 2021 and its share price has gained over 70% in the past 12 months. Having made a provision of $1.5 billion in February to cover expected fines, it expects the final sums it will now pay to come in roughly in line with that figure.

Glencore chief executive Gary Nagle, who assumed his role last summer after succeeding Ivan Glasenberg who had run the company for almost twenty years, covering the period during which the charges relate to, commented:

“We acknowledge the misconduct identified in these investigations and have co-operated with the authorities. This behaviour has no place in Glencore and the board, management team and I are clear about our commitment to be a responsible and ethical operator wherever we work.”

For the prosecution, Damian Williams, U.S. attorney for the southern district of New York, claimed Glencore’s bribery scheme ran for years “with the approval and even the encouragement of top executives” and “the tone from the top was clear: ‘whatever it takes’”.

While pleading guilty, Glencore told the court it had invested in improving its ethics and compliance and had either dismissed or disciplined employees involved in the practices being prosecuted. It has also, it said, “refreshed board and management team, dedicated to fostering a culture of integrity, responsibility and transparency”.

Despite confirming expectations that the past transgressions will cost the company $1.5 billion in fines, markets have reacted positively to the removal of concerns the outcome could have been even worse and forced divestments or led to criminal sentences. The Glencore share price has added around 0.6% today heading towards the market’s close.