The FTSE 100 yesterday leapt by 3.5% as stock markets globally surged on hopes incoming American president Joe Biden is set to launch a torpedo of a stimulus package. Having somewhat unexpectedly added a narrow majority control of Congress after Georgia’s two seats fell to the Democrats for the first time in history, Biden’s administration will now have the freedom to act. 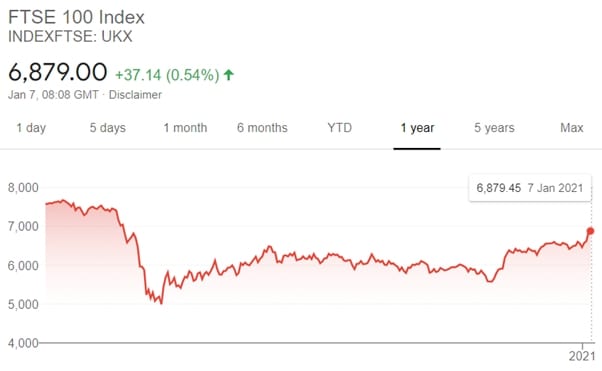 It had been feared the White House’s hands would be tied by Republican control of Congress. But the two Georgia seats now leave Congress perfectly split between Democrat and Republican senators. And with vice president Kamala Harris holding the deciding vote in the case of a tie, Biden’s administration will now have the power to push policies fully backed by its senators into law.

Despite violent protests in Washington D.C. that saw Trump supporters storm the Senate building yesterday, markets were encouraged by the prospect of more aggressive stimulus in the USA. The FTSE 100’s 229.61 point haul yesterday led to its biggest one day percentage gain since November 9th, when the first encouraging Covid-19 vaccine trial results were announced by the Pfizer and BioNTech partnership.

Over the first three trading sessions of 2021, the FTSE 100 has now gained just shy of 6%. That’s the best start to a year in the index’s 37-year history, fuelled by the encouragements of the Christmas Eve Brexit deal announcement, progress in vaccination roll-out and now investor faith in a generous new Democrat stimulus package for the U.S. economy.

“The idea is that a slim Democratic majority is enough to allow the stimulus gravy train to roll, and in a bigger size than would have been the case in a divided Congress.”

Banks, miners, energy companies and stocks in other ‘cyclical’ sectors tightly correlated to the underlying economy saw the biggest gains yesterday. In London, the banks HSBC, Standard Chartered and Barclays, were up by 10%, 9.4% and 8.4% respectively.

Energy stocks received an additional fillip from an unexpected announcement from Saudi Arabia. The de facto leader of the Opec+ alliance said it would cut its oil output in February and March by a million barrels a day. The other members of Opec+ additionally agreed to slow down the pace of their own forecast output increases.

However, there is now growing concern in the USA that Wall Street’s stock market is overheating. Yesterday, Goldman Sachs chief executive David Solomon commented he feels there is “some excess in markets”. Jeremy Grantham, the British-born chief executive of Boston-based asset manager GMO, went further, warning of “a fully-fledged epic bubble”.

Neither caution was heeded by the S&P 500, with the benchmark index up 0.6% yesterday. The broad-based Dow Jones industrial average closed to a 1.4% gain. Only the tech-heavy Nasdaq slid, down 0.6% on concerns the Biden administration could make life more difficult for big tech.

Investors were also betting on the bigger stimulus package expected to now pass through the Senate pushing up inflation. That saw yields on benchmark ten-year US treasuries rise above 1% for the first time since March.