Stock markets around the world have rebounded strongly during today’s session after a Thursday that saw the worst single-day losses since the legendary ‘Black Monday’ crash of 1987. Into the early afternoon the FTSE 100 was up over 4.5%, down from an early gain of 7%, and Wall Street’s major indices opened up to 6% higher than yesterday’s close. 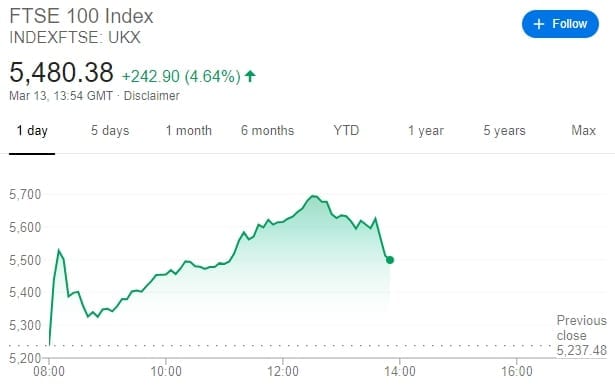 The rally has been catalysed by hopes of further government intervention to stimulate economies around the world. However, with the Covid-19 coronavirus pandemic reaching new levels in Europe and the US, and governments starting to take stricter action, such as the suspension of all major sporting events and other public gatherings, it remains to be seen how much of the gains will be held by the end of the day. From midday onwards, the London Stock Exchange has seen share prices sinking anew.

Germany announced this morning that it was prepared to bail out companies hit by the pandemic with “unlimited” injections of cash. The EU also said it was preparing to resort to tapping the ‘emergency flexibility’ built into the bloc’s budget rules. The Stoxx Euro 600, Europe’s broadest benchmark index, was up over 8% earlier today. That’s since fallen away to a 5.35% gain at the time of writing.

One of the most volatile week for financial markets in history has seen stock markets swinging by several percentage points become an almost daily occurrence. Things could potentially get worse next week as countries in Europe go into lockdown with schools, restaurants, bars and cinemas also being shut down.

Why indices have started shedding part of their gains in London and Europe as we move into the latter part of the day may be neatly summed up by a quote UBS analyst Masamichi Adachi who told the Financial Times:

“Nobody wants to hold any positions into the weekend.”

What comes next is hard to guess, with Mr Adami pointing out:

“You are seeing the market function melting down, with no standard correlations between asset classes.”

But for long term investors with no immediate need to cash in on investments for an income, there should be no need to panic. When the panic dies down markets should bounce back. The only real question is how long that might take but with the current situation not, unlike the last major markets crash, a structural one, the best guess is that the recovery should not take months to years to take effect.

Those with some spare cash might even profit from a buying opportunity, taking advantage of depressed prices to buy assets cheaply before the eventual rebound.

Investors warned not to rush into travel and...