The world’s leading stock markets are primed to conclude 2019 at record highs following an end of year Santa Rally that has given them a late boost. Since autumn of 2018, markets have had a bumpy ride on U.S.-China trade tensions, Brexit and concerns that global growth has slowed.

But meaningful progress in U.S.-China trade talks and the UK’s general election result providing a level of clarity on the Brexit process next year has given a boost which is driving them to new record highs as the year draws to its conclusion.

A large majority for the pro-Brexit Conservative Party on the December 14th election means they now have a mandate to push Brexit through early next year. Crucially, the government no longer has to rely on cross-party support for any agreement with the EU. Or, if one cannot be reached, to take the UK out of the EU without an agreement.

The United States and China agreed a ‘phase one’ deal to de-escalate the new tariffs regime both sides have slapped on each other’s exports over the past 18 months. On Friday, President Trump also made positive statements that he expects “new trade deals and more” in 2020, meaning that “the best is yet to come”.

If that indeed proves to be case and geo-political concerns continue to ease, investors could be in for a strong start to 2020. Even the more general worry over a slowdown in global economic growth was eased late last week when figures came out of China showing that profits at the country’s industrial companies rose at their strongest levels in eight months over November. Other countries that are major manufacturers have also recently published positive figures.

The London Stock Market’s FTSE 100 index gained 12.66 points on Friday to close up 0.2%. With 2 quiet days of trading left until the year’s end, the index is up 13.6% over 2019. Barring in unexpected last-minute plunge it means the exchange’s benchmark index will record its best annual gain in 3 years. 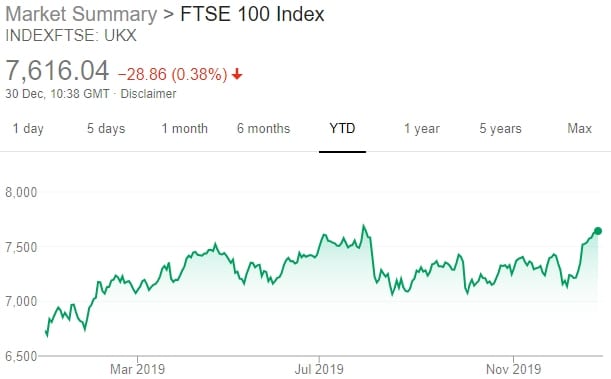 The European Stoxx 600 also gained 0.2% to a new record high – the third session in a row that has been achieved. Up a whole 24.3% for the year, the pan-European index seems sure to record its best year since the financial crisis over a decade ago.

In the USA, the major Wall Street indices also seem assured to close out 2019 strongly. The S&P 500 is up 29.3% and the tech-centric Nasdaq is up by over 35%. The Dow Jones industrial average also closed out last week at a record high. Three interest rate cuts and monetary stimulation by the Federal Reserve are believed to have helped U.S. equity markets on their way to a particularly strong year.