The Go-Ahead Group share price has crashed 17% today after the bus and rail services operator admitted “serious errors” that have led to an expected financial punishment from the Department of Transport (DfT). The action by the DfT will mean Go-Ahead will not be able to publish its annual accounts until next year which means the company will violate stock market rules and banking covenants. Ultimately it is likely to lead to the suspension of the transport group’s shares.

The Go-Ahead share price was down as much as 25% earlier today. It’s the second time in three months the company’s valuation has collapsed by a similar amount with the first share price crash coming in September when it was announced the DoT was terminating Go-Ahead’s contact to run Southeastern Trains. 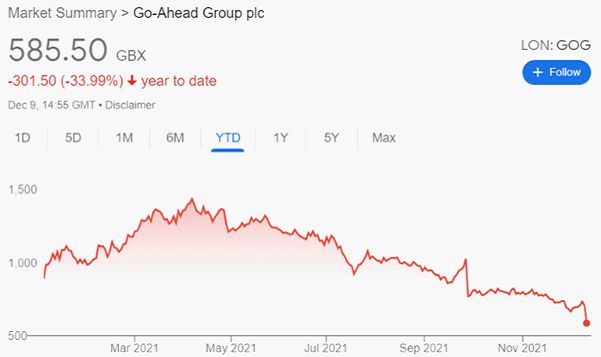 The last Go-Ahead’s market value dropped as low as the current £254.1 million was in early 2022, almost twenty years ago. The Serious Fraud Office is also reportedly monitoring the company whose financial year ended on July 3. The company has already delayed publishing its full year results twice and is now almost guaranteed to miss a regulatory deadline of January 3 to do so.

Go-Ahead also operates the Southern and Thameslink railway services franchises as well as the Gatwick Express. Its contract for Southeastern was terminated over a failure to correctly calculate profit-sharing repayments agreed with the DoT and for not declaring over-payment by the Treasury which was subsidising its high-speed Javelin train service between London St Pancras and Kent.

An internal investigation into the accounting errors, or “mismanagement” as Go-Ahead has referred to the situation has been led by the company’s chair Clare Hollingsworth and Sir Derek Jones who chairs the French company Keolis. Go-Ahead and Keolis ran Southeastern as a joint venture. With both having previously enjoyed careers as high ranking civil servants the scandal their respective companies are involved in, accused of inappropriately banking £25 million of tax payer funds, is a major embarrassment.

Their report, which has been filed with the DfT, admits that the “serious errors” were made in Southeastern’s accounting and that the franchise had “breached contractual obligations and good faith”.

“The behaviours identified by the independent committee . . . do not reflect the values and standards of conduct that the group expects of its colleagues.”

The company has committed to improving its corporate governance. It initially calculated that it owed DfT £8 million based on its profit-sharing agreement. That figure was upped to £25 million in September. What it might eventually come in at is still a mystery as the company would not make any concrete statement on the figure today saying it does not know. Currently Go-Ahead and its auditors Deloitte are going through Southeastern’s accounts for the period in question in an attempt to come up with an exact figure that this time proves to be accurate.

With the DfT still to decide on the financial penalty it will slap Go-Ahead with in punishment, the company can’t work out how much of a provision for the expenses should be included in its 2020-21 accounts, delaying their release. There is no precedent of a similar penalty as the Dft has never before sued one of its contractors under the powers given to it by the Railways Act 1993.

Making matter worse, Go-Ahead also quietly dropped a profit warning for its European operations. A provision of £36 million is to be added to losses and start-up costs for its German train services business totalling £58 million. Investors were also told to expect “a material provision” against a rail contract in Norway that is also operating at a loss.

The Go-Ahead share price has fallen by a total 34% for the year-to-date.