The exchange value of an ounce of gold broke through the $2000 barrier for the first time in history yesterday as investors increasingly looked for an alternative safe haven to the U.S. dollar.

On the rise since the beginning of the year, gold’s price has gained over 30% now over the course of 2020. The precious metal’s revived popularity is being put down to a combination of the economic turmoil caused by the Covid-19 pandemic and questions over the stability of the dollar, which has been favoured as a safe-haven refuge in recent years. 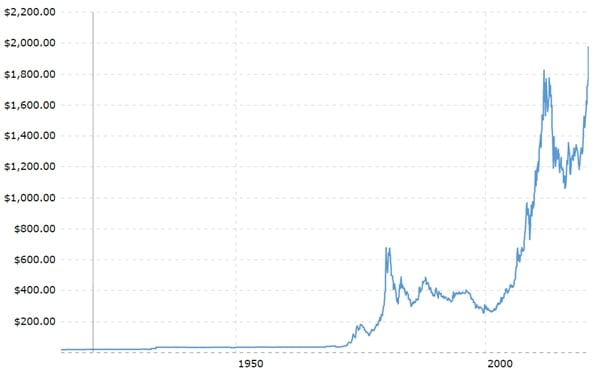 On an inflation adjusted-basis, the gold price is still a little over 10% of its all-time peak of 1980, when it reached a value of $2246.79 in today’s money. But if the rally continues, it is quite conceivable that a new inflation-adjusted historical gold price record could be set in the near future.

Investors traditionally flee into gold during periods of intense stock market volatility such as we’ve seen this year since late February. However, it had become a less popular safe haven over recent years, with many preferring the dollar, which has tended to rise in value over recent financial markets crashes. The biggest tech stocks have also become something of a rival to traditional safe haven assets at times over the past couple of years.

But this time around, gold seems to be back in vogue. Economists and investors were already concerned that the huge volumes of quantitative easing pumped into the system over the decade after the 2008 international financial crisis would at some point manifest in currency devaluation. That never quite happened but the volume of money printing by major central banks has redoubled over recent months in an effort to stave off the worst effects of the coronavirus crisis. There is a feeling that sooner or later currency devaluation and inflation will have to take hold.

The USA’s Federal Reserve has been the most active of all of the major central banks and that has started to be reflected by a recent slide in the value of the dollar against other major currencies.

Rising geopolitical tensions, especially the increasingly fractious stand-off between the traditional Western economic powers, led by the USA, and Beijing, are also contributing to international nerves and the attraction of gold. Silver prices have also jumped over the past few months and precious metals have been among the best performing asset classes in the world this year.