Goldman Sachs believes Bitcoin could challenge gold’s share of the ‘store of value’ market in future. And that if it does so it could rise to a value of $100,000 within the next half-decade. However, the American investment banking giant also warned that the amount of energy consumed by the blockchain technology that underpins the leading cryptocurrency could put institutional investors off and hurt progress into mainstream financial markets.

Analysts at the Wall Street bank say that Bitcoin currently holds a 20% share of the ‘store of value market’. The total amount of Bitcoin currently in circulation is worth around $700 billion at today’s prices of around $46,500. That compares to a value of around $2.6 billion worth of gold. 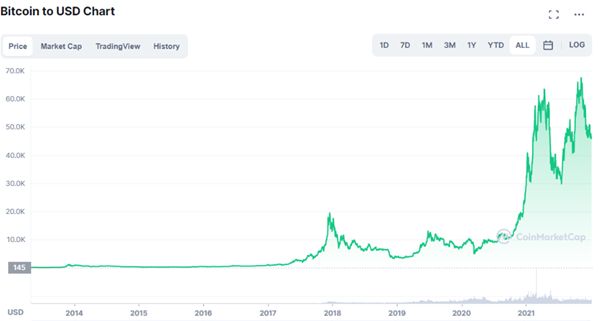 The analysts speculated that if Bitcoin’s share of the store of value market were to rise to 50% over the next five years, its dollar exchange rate would top $100,000. That would represent compound annualised returns of between 17% and 18%. The value of Bitcoin has risen by around 60% in the past 12 months.

As a store of value, Bitcoin’s attraction is that the number of cryptocurrency units that can ever exist is 21 million – 90% of which have already been released. Unlike fiat currencies, which can be printed by central banks, or gold, which can be mined, the total number of Bitcoin is both finite and fixed.

It took three years for one Bitcoin to reach parity with the US dollar after the cryptocurrency’s launch in 2009. The value of a Bitcoin spiked to $20,000 in late 2017 before dropping back to below $10,000 again. But gains since the summer of 2020, when the Covid-19 pandemic accelerated the trend towards a more digital economy have been both spectacular and volatile.

The Bitcoin price moved beyond $60,000 in early 2021 before dropping to around half that in late spring and then climbing again to hit a record high of almost $69,000 in November. It has since again fallen back to current levels of $46,500.  That’s still more than 50 times what a single Bitcoin was worth five years ago.

Governments and regulators are still largely wary of Bitcoin and other cryptocurrencies but have taken different stances. In September El Salvador adopted Bitcoin as legal tender while China declared all cryptocurrency-related activity illegal. The Bank of England and Federal Reserve see potential in digitalising currencies but also regard cryptocurrencies as a potential threat to financial stability.

Some institutional investors have started to dabble in Bitcoin. Last month Fidelity launched a cryptos ETF.