Yesterday was a tough day for Google with the share price of parent company Alphabet sliding by almost 4% and the company announcing its Russian business declaring bankruptcy. Google Russia took the surprise step because it was left unable to pay staff and meet other financial commitments as a result of its bank account being seized by Russian authorities.

It’s not entirely clear why the company’s bank account has been seized with Russia making no statement. However, Russian bailiffs have a history of seizing funds from the company’s account in the country even if this time it has gone one step further to seize the entire account. 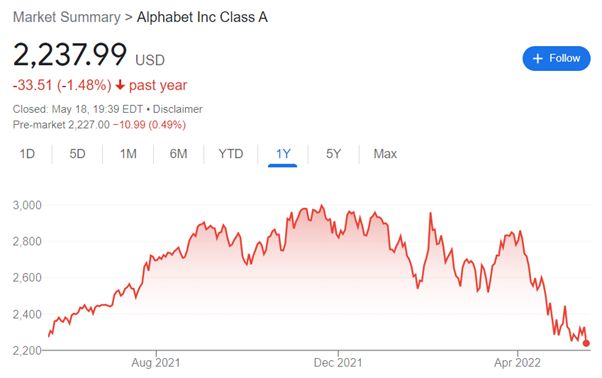 Cash has previously been forcibly taken from the company by Russian authorities to pay fines issued by the country’s regulators as punishment for suspending the YouTube accounts of Kremlin supporters. YouTube has also blocked the channels of Kremlin-backed broadcasters RT and Sputnik.

Fines have also been issued for Google-owned YouTube not taking down content the country has banned under its draconian “disinformation” laws, which essentially covers anything that doesn’t toe the Kremlin party line.

Previous fines have include a 1 billion rouble (£12.5 million) charge for blocking the Orthodox Church-themed YouTube channel owned by the sanctioned Russian businessman Konstantin Malofeev. Last December a Russian court fined Google Russia 7.2 billion (£90 million) for YouTube not taking down material it considered banned under disinformation laws. It’s possible the business’s Russian account was seized for the non-payment of that huge sum.

A Google spokesperson yesterday commented on the bankruptcy declaration:

“We previously announced that we paused the vast majority of our commercial operations in Russia. The Russian authorities’ seizure of Google Russia’s bank account has made it untenable for our Russia office to function, including employing and paying Russia-based employees, paying suppliers and vendors, and meeting other financial obligations.”

“Google Russia has published a notice of its intention to file for bankruptcy. People in Russia rely on our services to access quality information and we’ll continue to keep free services such as Search, YouTube, Gmail, Maps, Android and Play available.”

Russian-based users have been unable to buy apps via Google’s Play Store or pay for premium YouTube models since the country invaded neighbouring Ukraine in late February. Free services like Google Maps, Google’s search engine and YouTube have remained available.

Earlier this week the country’s authorities publically announced they don’t intend to block those for now as they did Facebook and Instragram. That step was taken after parent company Meta changed its rules to allow Ukrainians based in Ukraine to make death threats to Russian soldiers.