Investors fleeing to perceived ‘safe haven’ assets from the carnage being wrought on stock markets by the feared economic impact of the coronavirus crisis has pushed the highest rated government bonds to new record high prices.

With the yields offered on new bonds issued tumbling from the beginning of 2020, the resale value of previously issued bonds at higher yields has rocketed. As stock markets across Asia, the USA and Europe have tumbled, haven assets have been in high demand. The Fed’s decision to cut interest rates by half a percentage point at an emergency meeting this week has acted as a further catalyst. 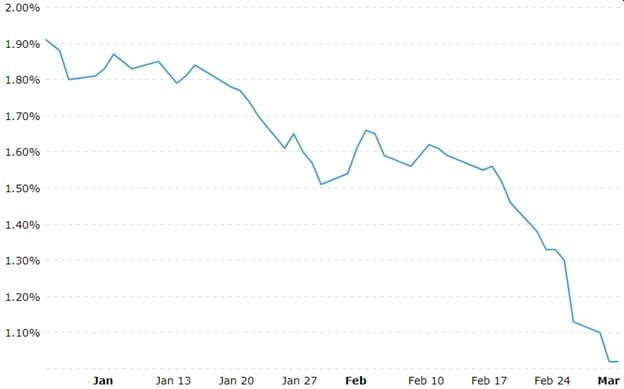 In the UK, government-issued gilts also saw yields hit new record lows and price highs this year. The yield on 10-year gilts has sunk to just 0.25%. But even that pales in comparison to the yields on German Bunds, which, already in negative territory, now offer a return of minus 0.732%. Bund investors are essentially now paying the German government to keep their money safe – minus an annual fee in the form of the negative interest rate.

While government and the highest investor grade corporate bonds have been soaring, stock markets have taken new hits after a brief recovery earlier in the week. In London the FTSE 100 was already down by 3.1% before midday. Germany’s DAX has seen an almost identical slide and the pan-European Euro Stoxx 600 by 3.2%. It’s now around 15% off its mid-February high.

Futures trading markets indicate that Wall Street’s major indices will follow a similar pattern when the American markets open later today. After a Thursday drop of 3.4%, the S&P 500 is expected to open today another 1.8% down. Brent crude prices have slumped to below $50 a barrel, with manufacturing and industrial output already slashed in China due to factories closing in an attempt to contain the virus’s spread.

“Markets are struggling to balance the competing forces of more extensive virus containment measures, and of monetary and fiscal stimulus.”

However, despite the turmoil, many analysts are recommending investors remain calm. Société Générale’s Alain Bokobza commented:

“Don’t give in to panic. We do not recommend switching away from a balanced allocation at this stage. Policymakers have clearly entered the race, which should prevent — for now — an extended bear market on risk assets.”

There are also some concerns that the coordinated interest cuts the Fed is leading major central banks around the world to make could see stock markets melt up after panic eases. That, some analysts fear, could lead to a bubble that, when popped, could end the now record long equities bull market that has been in place for around 11 years now. However, the current plunge of stock markets could represent an attractive buying opportunity to take advantage of an eventual rebound. Even if it does, as some fear, prove short lived.

Will Bank Investors Miss Out On Dividends Next...

Could Financial Markets Be Paused?