It’s a bold claim from a man often referred to as the UK’s best-known technology investor. He’s also arguably the country’s most successful fund manager of the past 5 years. Despite a recent dip due to a broader market sell-off of the technology stocks that have driven most of the Trust’s returns, Scottish Mortgage has returned over 340% since mid-May 2016 for an average annual return of 68%.

Before the trust fell from its February high, the return from just under 5 years of investing under the guidance of Mr Anderson and joint manager Tom Slater (head of U.S. equities at Baillie Gifford) was almost 450% or 88% per annum. 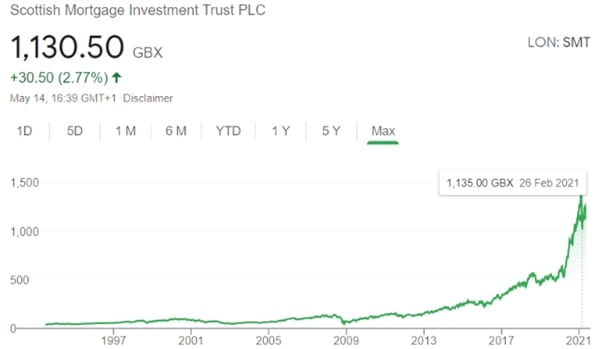 But Buffet, aka The Sage of Omaha, is himself often referred to as the most successful investor in history. His Berkshire Hathaway investment vehicle has done well itself over the past 5 years, delivering total returns of around 105% over the past five years, or a little over an average of 21% per annum. 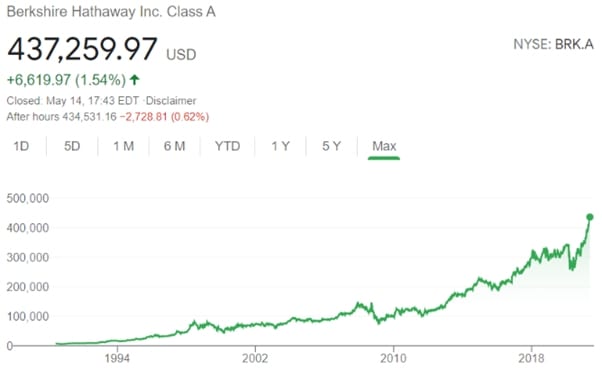 Early investors who bought into Berkshire Hathaway back when it listed in 1990 have seen returns of over 6058%. At an average annual return of almost 200% over 31 years, that represents an extraordinary period of sustained success. This is why Buffet is held in such high regard as an investor.

Mr Anderson and Mr Slater will have to maintain the rate of returns they’ve achieved at Scottish Mortgage over many more years before their overall record can be compared to that of their veteran American peer.

But if Mr Anderson is right that the traditional value investing methodology employed by Buffet over the years is no longer relevant to the modern world and contemporary stock markets, perhaps Berkshire Hathaway’s best days are already behind it. And the trust’s tech stock-centric growth investment strategy may represent the future for investors on the hunt for market-beating returns.

However, at least for Anderson, his impressive record as an investment manager won’t be continued at Scottish Mortgage. The 61-year-old is leaving the investment trust to take over as chairman of Kinnevik, a listed Swedish investment company that shares much of his philosophy for long-term investment in tech-enabled platform businesses. He’ll be replaced at the trust by 32-year-old rising star and Baillie Gifford partner Lawrence Burns.

And after last week giving his final manager’s report, another notably successful one, Mr Anderson took the opportunity to expand on why he thinks growth tech stocks have done so well for Scottish Mortgage investors. And why he believes the strategy will continue to reap rewards while the old value investing approach is doomed.

What is a value investing strategy like Warren Buffet’s?

Value investors like Buffet focus on company fundamentals, their current financial situation including things like revenues, margins, profits, tangible assets like property and IP, and debt. They only invest in a company if they feel the current share price represents good value as a multiple of its finances today.

Future prospects are not disregarded and, of course, taken into consideration but not considered as bankable. The risk of the many variables that might impact future performance, like new competitors, technological advancements, changing consumer sentiment etc., are all priced into the company’s current valuation.

Ideally, value investors like Buffet want to invest in companies whose share price they consider undervalues the company based on its actual financial performance. For example, because investors have taken fright at some temporary struggle like a scandal or other negative news the value investor sees as transitory.

For a value investor, a company like electric car maker Tesla, one of Anderson’s most successful investments ever, is the stuff of nightmares. The stock market sees it as the most valuable car manufacturer in the world.

But not because its current revenues, profits, and other financials are better than those of competitors. The reality is Tesla sells a fraction of the number of vehicles companies like Toyota, Ford, GM and BMW do. And as a result, earns a fraction of the revenues and profits generated by those companies.

Tesla’s $568 billion market capitalisation, a p/e multiple of 594.3 (Toyota, the next most valuable car manufacturer in the world trades at a p/e multiple of 10.67), is almost entirely based on the perception of the company’s future prospects. Investors are taking a big gamble Tesla will secure a dominant position in the future electric vehicles market that is far more dominant than any of the big traditional automakers have in today’s pre-electric market. 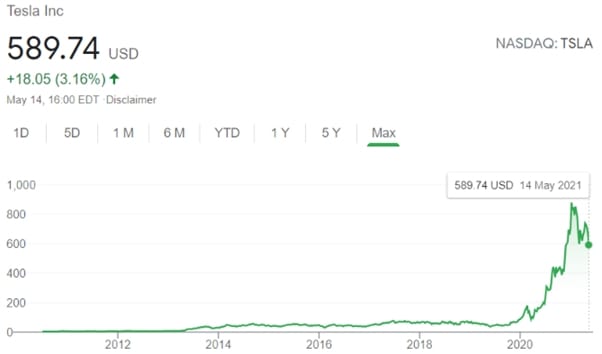 But despite what sounds like an insane valuation that takes no account of the possibility Tesla might not completely dominate the EV market 10 years from now, a growth investor like Anderson would choose to invest in Tesla ahead of Toyota. At least at the Tesla valuation of several years ago when Scottish Mortgage first invested. It began heavily buying shares in the company in 2013.

Anderson may well even readily agree, at least in private, that Tesla is currently heavily over-valued by the stock market. He probably wouldn’t touch the company’s shares at their current level, even if that is down over 30% from their January high.

But his success has come from making brave investments in companies like Tesla in their early days. He understands not every fresh-faced technology company will go on to be a market leader, or even sustainably successful over the longer term.

He also believes it is only these companies that have the potential to grow into the powerhouses capable of generating returns in the three and four figures over several years. And as long as enough of them do there is no issue with the fact many others won’t.

Early-stage investments in the Amazons, Teslas, Alibabas, and Tencents will more than compensate for the money lost on other companies backed. And to an extent that will generate the kind of superior returns Scottish Mortgage has delivered for its investors over a number of years now.

Growth investors like Anderson only invest in companies they are convinced have the potential to deliver three and four-figure returns over several years. Traditionally, growth investors have done well during bull markets only to suffer badly during market downturns. They have been the hare to the value investing tortoise that wins the race by virtue of slow, steady consistency.

But Anderson thinks the evolving global economy and business landscape means that is no longer the case. The logic that value investors work to, he is convinced, doesn’t hold in the new world order dominated by platform-based technology business models and the pursuit of tech-centric sustainability.

In fact, Anderson took the opportunity of the last earnings call of his hugely successful stint as co-manager of Scottish Mortgage to tell investors his only regret is not taking even bigger bets on the companies he believed would go on to dominate their markets. He said:

“There’s much that I have misunderstood and misjudged over the two decades but my ever-growing conviction is that my greatest failing has been to be insufficiently radical. To be blunt: the world of conventional investment management is irretrievably broken. It demands far in excess of the canonical ‘six impossible things before breakfast’ that Alice in Wonderland propounds.”

In a direct putdown of rival investors pursuing a value investing approach he said it represents “seeking minor opportunities in banal companies over short periods is the perennial temptation.”

A temptation that proves a distraction from the opportunities he sees of taking a long-term view of revolutionary companies just starting out on their paths towards greatness.

He was also critical of investors influenced by what he sees as rapidly growing but meaningless market noise:

“It is inherent to the notion of efficient markets that all available information is incorporated in share prices. Only new information matters. This is used to justify the near pornographic allure of news such as earnings announcements and macroeconomic headlines.”

By contrast, Anderson puts the success of his long-term growth investment strategy down to listening to scientists and other experts while ignoring the media and brokers, who he sees as “besotted as it is by fear-mongering and the many short-sellers.”

On his big 2013-14 Tesla bet, Anderson said that looking at the science showed that it was already clear by then electric vehicles eventually replacing traditional internal combustion engine-based models was “intensely likely”.

“We needed no insight, no clever model to spot it, only patience and trust in experts and the company (Tesla).”

But investors who might interpret Anderson’s growth investing strategy as an encouragement to put more money into the big, fashionable technology companies like Tesla, Facebook, Amazon, and Alphabet, would be mistaken. Scottish Mortgage has sold off 80% of its holding in Tesla over the past year and has completely pulled out of Facebook and Google-parent Alphabet. The trust’s stake in Amazon has also been sold down but not to the same extent.

His success has been based on getting into these companies early. And selling out at the point everyone and their dog has piled in and driven valuations into orbit.

If it’s already too late for a growth investment in the biggest names in tech what companies has Anderson invested in more recently?

Some of Anderson’s recent investments seem even more far-fetched than Tesla back in 2013 and Amazon in 2005. Scottish Mortgage recently invested in a company called Relativity Space, which plans to use 3D-printed rockets to take payloads like satellites into space.

And while the trust hasn’t historically placed great faith in British technology companies, justified by the fact none have grown to the same extent as U.S. or Chinese peers, it has invested £124 million into Ocado, the online groceries platform and warehouse automation technology company.

The trust is also upping its exposure to Chinese tech companies despite the deteriorating relationship with the West. It has a £240 million stake in Ant, the financial services company spun out of Alibaba by founder Jack Ma, who now runs Ant full-time after retiring from an active role in his original company.

While there was disappointment Chinese policymakers blocked Ant’s recent attempt at an IPO, there is long-term faith bets on companies from the huge economy will come good. Mr Slater, Anderson’s co-manager, commented on the trust’s China strategy:

“We added to most of our Chinese positions through the course of the year as well as taking new holdings when we have seen new breakthrough companies emerging.”

“Ant and its parent, Alibaba, have a long history of occasionally tumultuous but eventually good relations with regulators and we expect that they will defuse these tensions over the months ahead.”

Mr Anderson still has almost another year at the trust and will step down in April of next year. Over the transition period, Mr Slater will take over as lead manager. Investors in the trust will hope Mr Anderson still has time to identify a few more growth investment opportunities that will keep returns humming along long after he moves on.