Apple delivering its first sales warning in 16 years this week resulted in the tech giant’s share price taking its worst one-day tumble since 2013. The company’s market capitalisation dropped by $75 billion after CEO Tim Cook warned markets that revenues over the 3-month period ending December 29th were 5% down on the same time last year.

Sales for the key holiday period had been forecast at $89 billion to $93 billion but were revised down to $84 billion. Poor sales in China were highlighted as the main underlying factor for the contraction but other regions were also sluggish.

The latest 10% share price slump means Apple has lost around 38% of its value since the historical peak of $232.07 a share set on October 3rd last year. Over the last 12 months, stagnating iPhone sales numbers have been offset by increased profit margins driven by the iPhone X series, whose smartphones start at an aggressively priced $999. However, with Chinese sales now apparently tailing off, markets have suddenly lost faith in Apple’s ability to maintain revenue growth by launching ever more expensive models.

The strong suspicion now is that Apple has seen peak iPhone, the core product that drove the company’s growth, making it the most valuable in the world and the first ever to achieve a market capitalisation of $1 trillion. And unless revenue growth can be reignited by a new product or service able to pick up that far from inconsiderable slack, the question has to be asked if Apple’s share price has peaked.

At least for now, and despite the company’s attempts to convince investors revenues from services such as iTunes, iCloud and the App Store are that high growth unit, there is no obvious replacement for iPhone revenue growth. So where does Apple go from here? Can the company bounce back and reinforce its position as one of the most valuable handful of corporations in the world? Or will the first week of 2019 go down as the beginning of a slow, long term decline from the upper echelons of the world’s most dominant and influential companies?

Let’s take a look at what’s gone wrong, Apple’s options and the company’s prospects of a long term, sustainable recovery.

Why Has The Apple Share Price Slumped So Dramatically Since October?

The first, and perhaps biggest, catalyst to the dramatic decline in the value of Apple’s share price has been the change in wider market sentiment that has seen a broader based tech sell off. Apple’s far from alone in seeing its share price take a tumble. Facebook has seen a comparable loss, though the social media giant’s own rot set in a little earlier, dating back to July. Amazon and Alphabet have also been affected, though not quite to the same extent. The former is down over 20% since its own late September peak and the latter by a little more than 16%. Netflix, the streaming service and the last member of the giant tech FAANG grouping is somewhere in the middle, down a little under 30% following a strong start to the year has pared some losses.

Part of the major tech sell-off in place since October can be put down to a simple change in market sentiment. The companies were always valued at very aggressive multiples based on what it is now easy to retrospectively describe as over exuberance. Growth rates were always realistically going to slow and regulatory and tax pressures mount for a group of companies that until now have had relatively free reign. Combined with a spate of geopolitical risks from Brexit to the U.S.-China trade war and data indicating a broad based global economic slowdown may be gathering pace, investors have thrown off their rose-tinted spectacles. They are simply not currently prepared to pay the premiums they were for high growth tech as recently as several months ago.

However, while there is case that the extent of the tech and wider equities sell-off may have been overdone over the past few months, Apple’s case, along with Facebook, is a little different. We already knew growth was slowing and heavy reliance on one narrow range of eye-wateringly priced products to compensate for that with higher margins was always risky.

But Apple have defied cynics before. The company have succeeded in building an almost cult-like loyalty for their iPhone range and other ‘aspirational’ tech products, the iPad and MacBook laptops. Loyalists have not been put off by hefty price tags and continued to upgrade to almost every new release, especially when it came to the iPhone. Strong quarterly results over 2018 bolstered investor confidence and pushed back creeping doubts, suggesting that Apple might be pulling it off again, successfully driving the cost of a mass market (in economically developed nations) smartphone to, and significantly beyond for more expensive models, the $1000 level.

But this week’s sales warning has seen that already fragile investor confidence take a severe dent. Around half of the analysts covering Apple significantly downgraded their share price targets for the next 12 months. The initial fear that Apple had pushed the cost of an iPhone too far has returned. And if enough iPhones can’t be sold at those lofty prices to compensate for stagnating numbers, where is the future growth needed to support Apple’s trillion plus recent valuation going to come from? Right now, that’s far from clear.

Chinese demand has for some time been the source of hope that revenue growth could be maintained. That rug has now been sharply pulled from beneath Apple’s feet. CEO Tim Cook said that the company “did not foresee the magnitude of the economic deceleration”, that it says has hit sales in the huge country. The trade war with China instigated by President Trump slapping new tariffs on a wide range of Chinese imports into the U.S. is thought to have been behind a significant deceleration in China’s economy towards the end of last year. But it has to be suspected that negative sentiment toward flagship U.S. imports into China, like the iPhone, is also likely to have grown, both from the regime itself and the consumers on the streets.

However, it’s not just, or perhaps even mainly, anti-U.S. sentiment that is hurting China sales. The high end smartphone market is thought to have now reached maturity and the high cost of handsets, not limited to the latest iPhones though they are by far the most expensive, means users are holding on to them for longer. Whereas until now a large section on customers would update to the latest model annually, more are now choosing to skip a year or two. The more incremental upgrades new models have recently featured is also making that decision easier. The consumer slowdown in China and maturing smartphone market has led to an overall slide in sector sales. But it has hit Apple hardest.

iPhones have also lost some of their competitive edge as the technology of competitors has caught up. The difference in cost (more than twice as expensive) between an iPhone X and a Huawei P20 Pro, for example, is no longer seen as justified by an only marginal, and even that is debatable, difference in quality. The iPhone is no longer the clear favourite among the ‘aspirational’ millennial consumer. A degree of practicality has set in.

The Road Ahead For Apple: Is There Hope and Where Might Renewed Growth Come From?

A recent article in the Financial Times starts with a statement to investors by the Apple CEO, addressing them following a 10% slump in the company’s share price:

“Like others in our industry, we are experiencing a slowdown in sales this quarter”.

He then moved to reassure them the future was bright despite current woes:

“We’ve got some amazing new products in development, so we’re excited about the year ahead”.

The Apple CEO in question was not Tim Cook but Steve Jobs and the year 2002 rather than 2019. The iPod had been launched a year earlier and it would still be 5 years before the release of the first iPhone, which would go on to become one of the most valuable consumer products in history. Current CEO Tim Cook doesn’t appear to have the same kind of roadmap ahead.

Apple is investing heavily in a content streaming service, whose exact format is not yet known, it hopes will compete long term with Netflix, Amazon Prime and Disney. But it will first require heavy upfront capital injection and there is no guarantee of success. Cook also regularly points to growing revenues from Apple’s ‘services’ unit, which includes the App Store, iTunes and iCloud services. But is it really realistic to expect revenues there to grow to an extent, and at a pace, that can compensate for a significant drop off in iPhone revenues at this point? Investors don’t think so. It’s hard to see the potential for a Microsoft-esque transformation into a recurring revenue services provider. Critics have said for some time that despite attempts to position itself as a fashion brand and now looking to develop services, Apple is at core a hardware company. Does that mean it faces the same fate as a Nokia or Blackberry?

Apple’s R&D budget has grown immensely over the last five years and the pace has picked up since 2017, up 24% last year. Does that suggest the company knows it needs a new product to facilitate a similar transition to the iPod to iPhone stage of the company’s development? 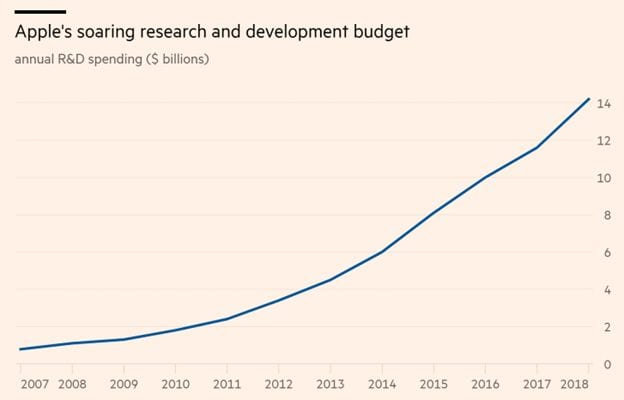 Perhaps, but if something that represents a significant new product is in the works, it is being kept so secret that nobody outside of the company yet has a whiff of it. An autonomous vehicles operating system and immersive VR technology are certainly two areas that a lot of work is going into and to which key appointments have been made, such as Andrew Kim, a former Tesla designer and Dorian Dargan, previously a VR producer at Oculus, the VR hardware and software developer now owned by Facebook.

Apple Watch and AirPods sales are good, up 50% over the last quarter but neither product line looks like having anywhere near the potential of the iPhone. They are good sidelines but not the kind of products that can sustain Apple as the kind of company it has become accustomed to being.

While most analysts now see further downside potential for Apple’s share price this year it is certainly too soon to write the company off. It could be the end of the Apple ‘Golden Era’ and mark the beginning of a slide towards becoming ‘just another big tech company’ rather than the brand that has defined a decade. But Apple’s been written off before. The question for investors is whether it can come up trumps again. That could be either by hitting upon the answer to the trillion-dollar question of what follows the smartphone or making a huge success of its new content streaming service.

But right now, there are a lot of unanswered questions for Tim Cook, Apple and its investors.

The Nasdaq dropped 1.9%, while the yield on 10-year Treasury notes dropped to 1.557%... END_OF_DOCUMENT_TOKEN_TO_BE_REPLACED

The dollar’s received a further boost as the Nasdaq dropped more than 2%, the... END_OF_DOCUMENT_TOKEN_TO_BE_REPLACED