Has the Deliveroo share price bottomed out after orders value grows by 70%?

The Deliveroo share price has risen by over 2.5% today after the company announced a strong end to “another extraordinary year” that delivered 70% growth in the value of orders made via the takeaway delivery app. Investors in the company will be hoping today’s gains may mean the tech start-up’s valuation has finally bottomed out after dropping almost 58% between its high point last August and low earlier this week.

The 70% growth in gross transaction value (GTV) took the value of orders executed by Deliveroo last year to £6.63 billion, which was at the top end of guidance. Fourth-quarter GTV was up 36%, helped along by new restrictions introduced in December in an effort to control the new Omicron variant. The total number of orders in the same quarter was up 42% to 80.8 million, taking the year’s total to 300.6 million. 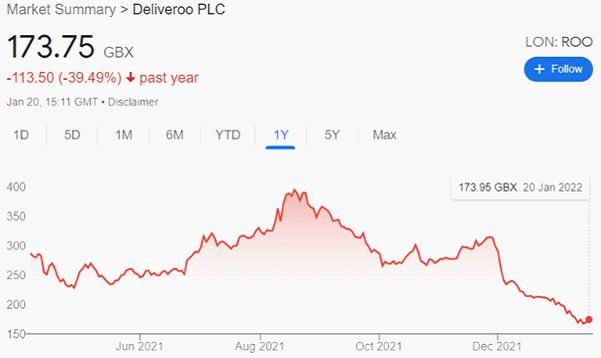 The average order value dropped by 5% but didn’t throw guidance on gross profit margins off track, which still came in at between 7.5% and 7.5% over the year. Deliveroo’s chief executive, and co-founder, Will Shu, commented:

Deliveroo has also continued to build up market share in the UK as GTV increased by 70% and order by 72% in its core domestic market. Internationally, the companies orders for the year were up 74% thanks to 43% growth in Q4 and GTV improving by 30%.

Deliveroo was founded in 2013 by Shu and the software engineer Greg Orlowski, who was the company’s CTO in its early years before going on to also co-found Peanut App, an app-based community for women that he was also CTO. It now operates in 12 companies, works with almost 150,000 restaurants and 180,000 delivery riders.

It floated on the London Stock Exchange in March after a high profile IPO that valued it at £7.6 billion but has struggled as a public company. Its current 173.5p share price is less than half the 390p-a-share IPO investors paid. Deliveroo currently has a market capitalisation of £3.22 billion.

The company’s valuation has been buffeted by concerns the market for food delivery will shrink with the end of pandemic restrictions and potential changes to the employment status of riders increasing overheads. Margins in the intensely competitive market are already dangerously thin as heavily backed start-ups and more established companies jostle for market share. Deliveroo’s main competitors in the UK are JustEat, Uber Eats and FoodHub.

Despite Deliveroo’s IPO being labelled London’s worst ever, Shu has always remained relaxed about the company’s early share price struggles, maintaining the company’s valuation would take care of itself over the long term if he did his job properly. The sanguine approach appeared to be paying off last year as August highs briefly took the Deliveroo share price above its IPO valuation for the first time.

However, it has since lost over half its value again. One of the factors that has acted as a drag on the Deliveroo valuation was Shu being forced into the sale of £47 million of shares to settle a tax bill on restricted stock he was given as part of the IPO. There are also still major questions around the company’s road towards profitability, and the low-margin sector’s wider potential to offer sustainable profitability.