Have defence stocks embarked on a meta trend that would be foolish to ignore?

When Russia invaded its neighbour Ukraine in late February 2022, it profoundly shifted global geopolitics in an arguably more significant way than any other event since the Second World War. Europe hasn’t been entirely free of war since 1945. In the 1990s, the collapse of the former Yugoslavia led to war and genocide and there have been a number of other civil and localised military conflicts.

But nothing has come close to the scale of Russia’s move to conquer its relatively large (Ukraine’s pre-war population was over 40 million) neighbour. Neither in terms of the size of the military operation nor the number of both military and civilian casualties which are already in the tens of thousands with no end in sight.

But the Russo-Ukrainian war has also had a broader impact that goes beyond the devastation wreaked upon Ukraine and its inhabitants. For the first time since 1945, the West has felt genuinely threatened militarily. Ukraine may not be a member of either the Western military alliance of NATO or the political and economic alliance of the EU. But it has, since the 2014 Euromaidan Revolution that saw the country’s population reject and rise up against the pro-Kremlin satellite government of then-president Viktor Yanukovych, been closely aligned with the West.

The Revolution of Dignity, as it also became known, was a response to Yanukovych suddenly reversing a decision overwhelmingly approved by the country’s parliament to sign a political association and free trade agreement with the European Union (EU). Caving in to pressure from Moscow, Yanukovych announced that Ukraine would instead deepen its economic ties with Russia and the Eurasian Economic Union that also includes Belarus and Kazahkstan. Ukraine’s population rejected that direction and announced its desire to move towards integration with the West’s system of democratic capitalism.

Russia’s immediate response to that snub and move away from its orbit was to annex Crimea and support pro-Russia breakaway republics in Ukraine’s eastern Luhansk and Donetsk regions. That inevitably strengthened Ukraine’s resolve to more closely integrate with the West, economically, politically and militarily. And, ultimately, set off the chain of events that culminated in Russia’s President Putin deciding to take the extreme step of a full military invasion.

While refusing to “put boots on the ground” or directly engage with the Russian army in Ukraine, NATO and other Western allies have rallied to their ally’s cause. Huge amounts of financial, humanitarian and especially military aid have been funnelled to Ukraine since February and are increasing as Russia’s assault on the Donbas region that includes Luhansk and Donetsk grows in intensity.

The West’s military aid, in the form of intelligence sharing, training, and weaponry has helped Ukraine contain Russia’s invasion. Over $30 billion in value has so far been contributed, the bulk from the USA with the United Kingdom leading the way among European allies. And much, much more will have to be added to that total if Ukraine is to halt Russia’s advance into its territory. Even more, if it is to be ejected from territory it has so far occupied. 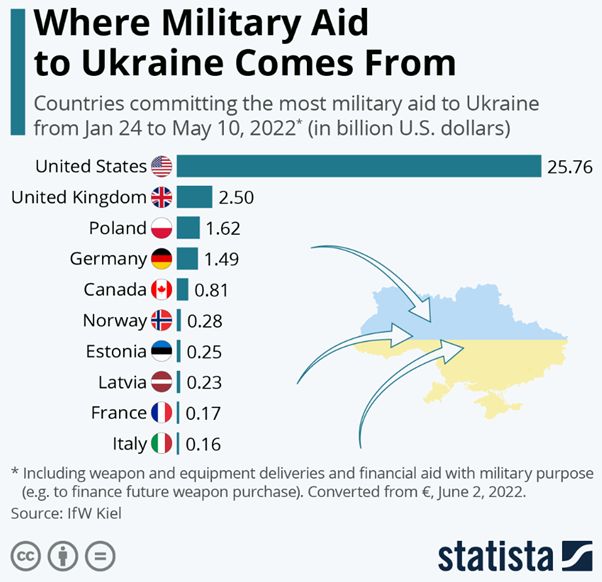 The strength of the West’s response and the extent of the military aid given to Ukraine has been a step seen as necessary to avoid NATO and Russia, both nuclear powers, coming into direct military conflict. Since the build-up to Russia’s invasion, a successfully occupied Ukraine has been seen as almost inevitably leading to further land grabs, including Moldova and Georgia, also both former Soviet states.

But more concerningly, the presumption is that if Russia is victorious in Ukraine there is a real risk it could then move for the Baltic states of Estonia, Latvia and Lithuania, which all have significant ethnic Russian populations. All three countries are members of both the EU and NATO and Latvia and Estonia both have long land borders with Russia. So does Lithuania, though with the Russian exclave of Kaliningrad, as well as Russian ally Belarus.

In short, Russia’s invasion of Ukraine is seen by the West as not only an unprovoked military violation of an independent sovereign state that had expressed the desire to join its economic, political and military alliances. But as a direct and existential threat to current members of those alliances.

Providing Ukraine with the weaponry to hopefully halt that threat to the West’s democratic capitalism and established world order at the first hurdle is, therefore, seen as unnegotiable. And it means a huge increase in military spending by Western countries. Not only to fund the military aid that will continue to flow into Ukraine but also to bolster domestic and NATO forces more broadly.

Military spending had dwindled consistently since the end of the Cold War until this year. It is now exploding. Only a handful of NATO members, including the USA, UK, Poland and Estonia, have consistently met their obligation to spend 2% of GDP on their defence budgets in recent years. That has changed overnight with much-criticised members such as Germany committing to increase their spending to the 2% threshold as well as spending additional billions now to beef up their defence forces.

Over the next several years the defence sector will benefit from tens of billions of dollars of additional spending by not only the USA but Western democracies around the world. Russia’s approach has also refocused East Asian democracies like Japan and South Korea on the potential threat posed by China, which has its own claims on various territories, not least Taiwan.

For investors who consider significantly increased global defence spending as a meta trend it makes sense to have exposure to, these are a selection of defence stocks that look well-positioned to benefit. 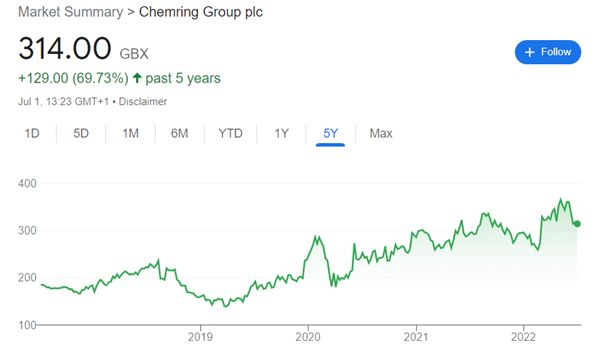 The Telegraph’s Questor column notes that Chemring was already enjoying a period of significant growth even before Russia’s invasion of Ukraine. Interim results published in early June showed an 18% improvement in underlying pre-tax profits. That’s before any boost to orders as a result of the war because there is a time lag between new orders being announced and them feeding through to the balance sheet. Operating margins also improved by a percentage point over the first half of the year to 15.2%

The company has also reduced its net debt levels to just £18.4 million including lease liabilities which means it has a gearing ratio of under 5%, reducing any impact from rising interest rates and opens the doors for mergers and acquisitions that could further accelerate growth after the successful integration of AI and machine learning specialist Cubica Group last year.

The decision to keep dividend payments to just 40% of net profits also indicates investment plans, either in existing operations or in the form of acquisitions.

Despite circa. 85% improvement in the Chemring share price since 2019, the company’s strong long term prospects suggest there could be plenty more upside to come. 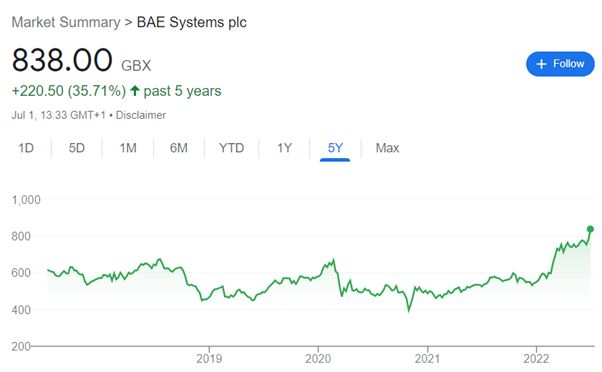 BAE Systems is also benefitting from increased defence spending and has seen its valuation rise more than 50% this year thanks to already securing new contracts from Germany. With a current dividend yield of 3.4%, BAE looks attractive in terms of both further growth potential and income. While the stock is not cheap, trading at a x15 forward price-to-earnings ratio compared to its long-term average of x11, the current geopolitical situation means it would be more of a surprise if BAE’s valuation does not achieve further gains over the months ahead. 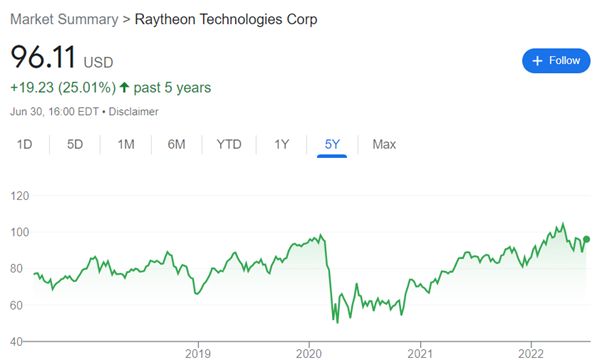 The result of a 2020 merger between missiles specialist Raytheon and aircraft engines and aerospace parts manufacturer United Technologies, the company will be a major beneficiary of the war in Ukraine. Last year the company’s Missiles and Defence unit generated revenues of $15.54 billion, almost a quarter of group income.

With the Donbas front line turning into an artillery-focused war of attrition, Ukraine’s defenders are going through missiles rapidly, which can be expected to lead to a significant boost for Raytheon’s revenues. The company makes the anti-tank Javelin missile and Stinger anti-aircraft missile, which are both being used in huge numbers in the war. It also builds the patriot and Tomahawk missiles and is investing in cyber defence and hypersonic weapons technology.

Investors who prefer a more diversified approach to defence stocks exposure than investments in individual companies could instead opt for defence sector ETFs. The three best established options are: