Stock markets around the world saw significant gains yesterday after promising test results raised hopes for a Covid-19 vaccine. A gradual easing of lockdowns globally, particularly in Europe, offered further optimism for equities as economies start to splutter back to life.

In the UK the FTSE 100 added 4.3%, to see the benchmark index rise to 6,048.59 points and quickly recover and move beyond last week’s 2.3% slide. The index is now around 18% down from its mid-February high but in a healthier place than it was over the second half of March. 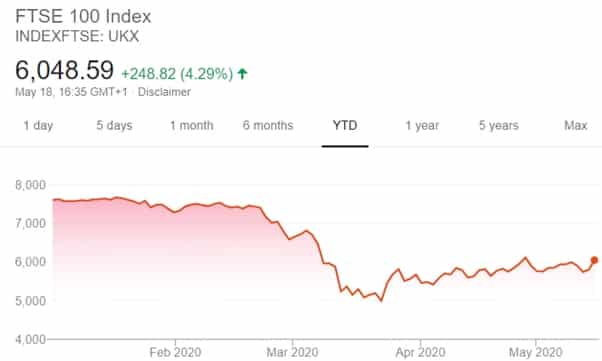 Elsewhere, the major indices on Wall Street were up around 3%, the Dax in Germany finished the day up 5.7%, France’s CAC 40 5.2% and the pan-European Stoxx 600 added 4.1% as last week’s negativity around economic data filtering through from April gave have to cautious optimism.

Renewed faith in an economic reawakening was also reflected in oil prices, with the international Brent crude and U.S. West Texas Intermediate (WTI) benchmarks both at their highest levels since early March – $34.82 and $31.82 respectively. Brent crude added 7.1% and WTI 8.1%.

This morning Asian markets were also up, with Japan’s Nikkei posting a 1.5% gain, the Hang Seng up 2.24% in Hong Kong and China’s Shanghai and Shenzhen Composite indices rising by 0.8% and 1.28% respectively.

The gains come after U.S. drugs maker Moderna released a statement on phase one human trials, confirming that patients who had received a vaccine had developed an immune response capable of fighting off Covid-19. The company’s share price rocketed 20% to $80.

Tal Zaks, Moderna’s chief medical officer, described the trial phase result’s as substantiating the company’s “belief that [the vaccine] has the potential to prevent Covid-19 disease and advance our ability to select a dose for pivotal trials”.

The vaccine trials are among the earliest involving humans and phase two testing is now set to get underway “shortly”. Phase three trials are expected to run from July. If the vaccine passes those it will be approved by the FDA and mass production can begin.

British pharma giant Astrazeneca is also making progress towards a vaccine and currently conducting trials in partnership with the University of Oxford. On Sunday the company said it would be able to produce as many as 100 million doses of their vaccine before the end of the year, should trials prove successful.

Developments on wider economic activity included Italy and Greece announcing they would open to tourists. That news saw the share prices of aviation and tour operator company’s record some significant gains. Ryanair was up 15.8%, Easyjet 10.5%, British Airway’s parent IAG 11% and tour operator Tui rose by 13.4%.