The Hornby share price closed up 10.6% yesterday, with another 3% of gains added in early trading today, after the scale models company announced the appointment of the angel investor Henry de Zoete as a non-executive director. Markets clearly approved the potential impact of de Zoete, who is a graduate of the renowned Silicon Valley start-up accelerator, Y Combinator and serial entrepreneur. Mr de Zoete also holds the dubious distinction of holding the record for the highest value deal ever secured on the popular TV show Dragons’ Den.

In his non-executive director role, Mr de Zoete will sit on Hornby’s audit and remuneration committees. His track record as an entrepreneur includes founding The Big Deal in 2014, a platform that uses technology to group consumers who want to switch energy suppliers together. Negotiating as a collective gives them more bargaining power to secure a better deal. 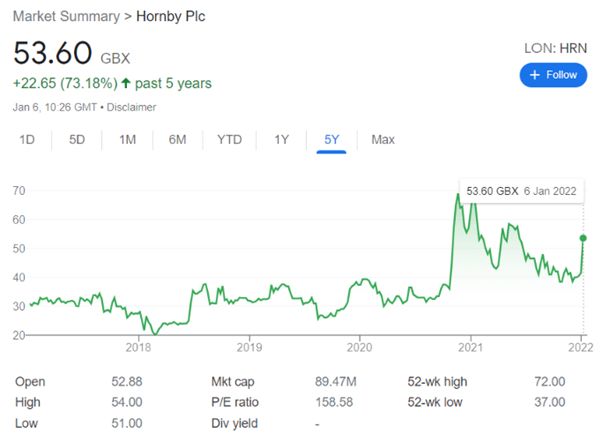 He was also behind Look After My Bills, another platform that became the UK’s biggest energy and utilities provider auto-switching service. The company raised significant investment before eventually being acquired by GoCo, the comparison portal Go Compare’s parent company.

Mr de Zoete has also acted as a special adviser at the Department of Education and serves as a non-executive board member of the Cabinet Office.

Hornby could be seen by investors as a good inflation hedge. The company last month raised the cost of its products to reflect rising manufacturing and shipping costs; a move expected to be absorbed by hobbyists without any meaningful impact on demand.

Hornby’s non-executive chairman John Stansfield commented on the appointment of Mr de Zoete to the board as a non-executive director with:

“I am very pleased to welcome Henry to the board. I am in no doubt that he will make a strong contribution to the group as we move forward with our digital transformation.”

“Hornby, Scalextric, Corgi, Humbrol and Airfix are all incredible, heritage brands that I grew up with. I am really excited to give strategic input as the brilliant team focuses on digital transformation and growth, to build the business for generations to come.”