From less than $2000 a year ago, the cost of shipping a 40ft container from Asia to northern Europe has risen to just shy of $14,000. Costs have increased particularly sharply over the past few months, rising $6000 per container since the end of April, reports The Financial Times, citing data provided by freight data specialists Xeneta. 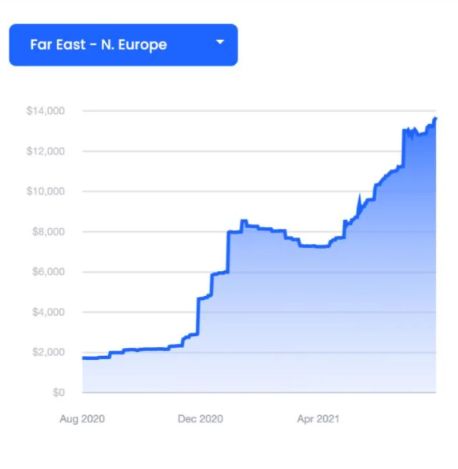 Shipping freight containers from Asia on routes through either the Indian Ocean or Suez Canal is not only several times more expensive than it was just months ago but less reliable. Data from Project44, whose OceanVisibility track-and-trace product tracks 350,000 containers daily, shows average delays on containers being shipped between China and Europe has increased from 0.5 days a year ago to 2.5 days by last month. Average delays peaked at over 3 days in the early part of the year.

Service is also reportedly poorer too with industry reports of containers, for which a premium had already been paid, being left at port because freight ships have been overbooked.

The costs of shipping freight between China and the U.S. West Coast has also risen steeply from a little over $3000 per 40ft container to around $15,800. Until recent months, rising shipping costs had hurt northern Europe harder than the USA but a spike in July means that has changed and prices to the USA have no increased over tenfold since the onset of the coronavirus crisis. 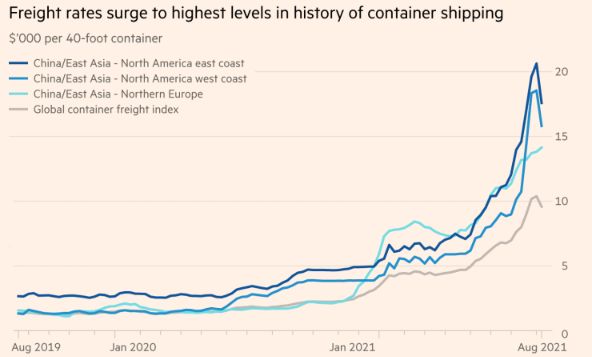 What’s causing the shipping crisis?
Most of the issues besetting the shipping industry and its customers can be traced back to the Covid-19 pandemic, either directly or indirectly, though the huge Ever Given container ship getting wedged across the Suez Canal blocking it for several days certainly didn’t help.

The first impact of the pandemic on shipping costs has been to trigger a huge rise in demand as consumers in Europe and the USA redirected spending on services, often unavailable due to lockdown restrictions, to goods – many of which, or their components, are shipped in from Asia. Shipping capacity is not especially elastic in the short-term and has not been able to quickly adjust to that spike in demand.

There have also been several major, Yantian in May and Ningbo-Zhoushan this month, port and terminal closures as well as hundreds of other minor disruptions as a result of Covid-19 outbreaks. Logistics giants Maersk said the Yantian closure had a far more significant impact on its operations than the Suez blockage.

The pandemic has also led to an increase in red tape around international logistics, slowing down processing.

What have been the results of the shipping crisis?

So far consumers in Europe and the USA have been relatively insulated from the effects of the shipping crisis, with retailers and their suppliers absorbing most of the costs. But some are already being passed on, contributing to rising inflation levels, and numerous companies have said they will have to further increase prices for end consumers if higher shipping costs persist. Bulkier goods like toys and cheap furniture could see prices rise significantly over coming months.

The shipping crisis, and disruption further down the supply line such as a lack of workers in manufacturing facilities, has also led to shortages of some goods, most notably semiconductors used in computers and other electronics.

How long are the shipping crisis and higher freight costs expected to continue?

There’s no expectation for shipping costs to come down in the near term. It will take time for logistics companies to significantly increase their capacity. However, they are making efforts to do so with new orders for container vessels reaching record levels this year. 229 new ships were ordered over the first 5 months of the year.

Even taking account of old ships being scrapped, that should increase global capacity by 6% and rising. But that new capacity won’t start to come online until 2023, which means it looks like much higher freight prices will be a reality until at least 2023. Even then, many sector analysts doubt prices will return to pre-pandemic levels because the companies that own the container liners are doing a better job of managing capacity.

There aren’t many alternatives either. Theoretically, rail or air shipment are alternatives to shipping for less bulky items like electronics but capacity there is also limited and tariffs have jumped, meaning prices are also high.

Given time, new competition would be expected to enter the market, quite possibly in the shape of crewless robot freight vessels, and drive prices down again. But the situation is severe and long term enough that many businesses are saying they will ‘reshore’ supply chains, moving them closer to home to protect against the risk of future repeats of the current shipping crisis.

That won’t be easy though and it wouldn’t be a surprise to see enthusiasm for reshoring wane once the difficulty and costs involved are fully appreciated. Even if a strong reshoring trend were to take hold, it will take years, if not decades, to recalibrate global supply chains to a major extent.

Inflation is the most obvious consequence of soaring shipping costs that will impact investors. Aggressive fiscal stimulus measures designed to stave off the worst of the pandemic’s economic impact had already injected financial markets with enough liquidity that inflation would almost certainly have risen to its highest level in years. But shipping costs may become an even more significant influence on inflation over the next couple of years.

In the UK, inflation is expected to rise to 4% by Christmas, which is double the Bank of England’s target level of 2%. There is at least a reasonable chance it will continue to rise next year.

The banking sector could be a beneficiary if the Bank of England moves to raise interest rates in a bid to control rising inflation. However, fixed income bonds, already yielding very little, would then be expected to move into the red as new debt is issued at higher yields.

Traditionally, assets such as gold, commodities, property and index-linked securities offer a hedge against inflation but not a perfect one. Property prices might have faced downward pressure from rising interest rates making mortgages more expensive. But the shipping crisis is driving up the prices of building materials more noticeably and rapidly than most other categories of goods. That will start to reflect in the profit margins of builders and may keep prices of new properties higher, steadying the overall market.

Investors might consider dialling back their exposure to growth stocks, which have performed so well over the past decade, driving the majority of major stock market returns. They tend to suffer during periods of higher inflation and interest rates.

Stock market listed shipping companies may be worth investors’ consideration after record profits were generated by major operators over the second half of 2020 and the first half of 2021. Those increased revenues and profit margins are expected to continue for at least another couple of years.

The share price of Danish shipping giants Maersk has almost doubled over the past twelve months. China’s Cosco Shipping Holdings, listed on the Hong Kong and Shanghai stock exchanges, is up over 400%. Japan’s Nippon Yusen Kabushiki Kaisha is up 416% over the last year. 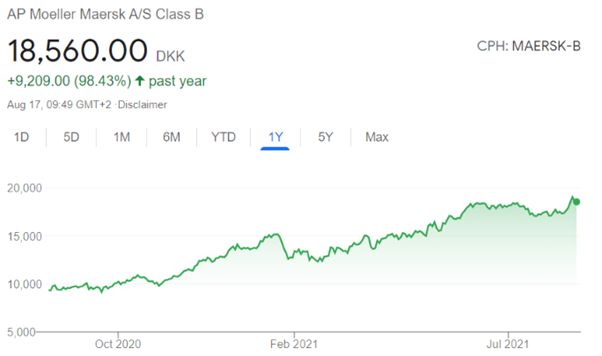 Big gains have already been made but if prices remain high for a sustained period of time, there could be more to come.

Like any big change in prices that has as influential a knock-on effect as shipping costs, there will sectors that win and lose as a result. Investors will have opportunities but should also be aware of the risks to their current portfolios and consider adjusting accordingly.

The shipping crisis can be expected to be a major economic theme for some time to come.