How have emerging markets been changed by Russia’s war with Ukraine and are they still investable?

For years, one of the most recommended approaches to a low cost, low maintenance and relatively low risk investment portfolio that tracks the global economy was to simply invest in a combination of the MSCI World index and MSCI Emerging Markets index. The former tracks stocks from developed economies and the latter stocks listed in emerging economies.

To track global stock markets as a proxy for the constantly growing global economy, all investors have to do is put 70% to 80% of their portfolio into the MSCI World index and 20% to 30% into the Emerging Markets index.

The approach is based on the data-backed fact that while economic cycles have come and gone over the past several decades, global GDP has maintained almost constant growth. 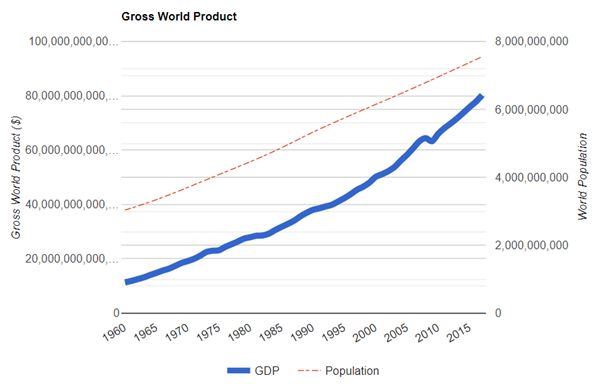 Despite all the doom and gloom we are constantly bombarded with by the media, and without discounting the reality far too many people still live in poverty or semi-poverty, the world keeps getting wealthier. In most countries, there are larger middle classes than at any point in history and they are growing. And the human population also keeps on growing, providing a steady stream of new customers for successful companies.

The market capitalisation of all the public companies listed on all of the world’s stock markets also keeps rising. 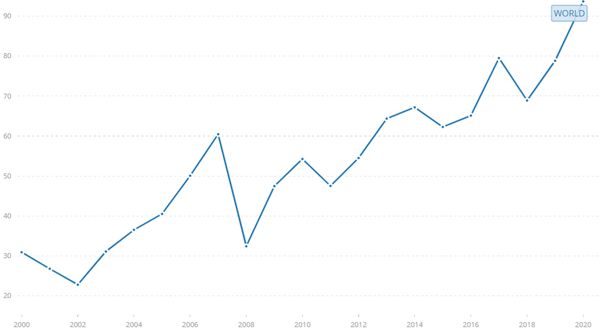 Assigning the majority of investment capital to tracking developed markets, which also keep on growing, interrupted by the occasional crash as economic cycles come to an end, is as safe an investment strategy as realistic. It has also been a very successful strategy with the MSCI World index offering an average annual return of 11.14% between December 1978 and March 2022.

Investors who want to track the entire world economy in the belief emerging markets growth will be stronger than that of more mature markets in future years can assign the remaining 20% to 30% of an investment portfolio to the MSCI Emerging Markets index. It has delivered an average annual return of 10.61% between December 1987 and March 2022.

Has Russia’s war on Ukraine changed the risk to reward balance for emerging markets to an extent investors should reconsider their exposure?

However, over the past couple of months, the ripple effects of Russia’s invasion of Ukraine and a shaky outlook for the Chinese economy have prompted some analysts to argue the risk to reward profile of emerging markets has shifted out of their favour. Does it no longer make sense for investors to be exposed to the risk represented by emerging markets in the hope of a higher growth ceiling compared to developed alternatives over the next decade or two?

A significant number of investors appear to have reached exactly that conclusion. The Institute of International Finance says $9.3 billion was withdrawn from emerging markets last month. That represents the first month of net outflows from the sector since March a year earlier. Emerging markets-focused investment trusts are almost all trading at a widening discount to their net asset values.

The plunge in the value of Russian stocks as a result of sanctions since the beginning of the war in late February has hurt emerging markets indices and funds but not hugely. Russian companies usually have a relatively light weighting.

However, the war is having a ripple effect. The first indirect factor hurting broader emerging markets sentiment is the fear other major emerging markets could also be hit by Western sanctions in the future. That fear is most concentrated around the future of China, which has long held assertively stated ambitions to reclaim Taiwan.

If China were to act on those ambitions militarily, would the country’s companies also be ostracised by global markets? And what if other major emerging markets like India, Pakistan and Brazil were to pull back from globalisation or start to sabre rattle or worse?

These are not new risks but the Ukraine war has newly crystalised the threat of such developments actually eventuating for investors. It might not, in the end, be inevitable that all emerging economies move closer into the embrace of capitalist democracy over time. Or at least maintain a stable system that is compatible with the financial markets of capitalist democracies.

The risk of global markets and geopolitics pulling farther apart again after a period of closer integration appears heightened. And that is denting investor sentiment towards emerging markets.

Less dramatically, higher interest rates and the economic cost of inflation, especially for energy and food, are also most damaging to emerging economies. Investors pulled out of emerging markets in 2013 when the Fed just hinted at tapering quantitative easing. Rising interest rates and an accelerated winding down of stimulus is expected in Europe and North America over the next couple of years in an attempt to control inflations.

Rising rates will make it more difficult for emerging economies and emerging market companies to service their debt. That will be especially the case for economies that are most reliant on energy and food commodity imports. Turkey is a prime example of that group.

However, some emerging markets may weather the storm better. Many Latin American economies such as Brazil are major exporters of energy and foodstuffs. Higher prices could help them narrow trade deficits and potentially even move into surplus. That’s reflected in the fact Latin America saw investment capital inflows of $10.8 billion in March. 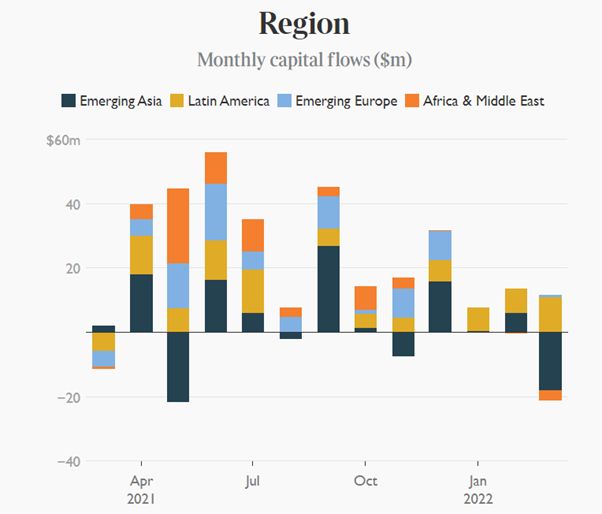 Chinese stock markets have fallen significantly over the past year as a result of aggressive state-backed regulatory meddling in especially the technology sector and fears over the debt-laden real estate sector. Hong Kong’s Hang Seng index is down over 25% in the past year. 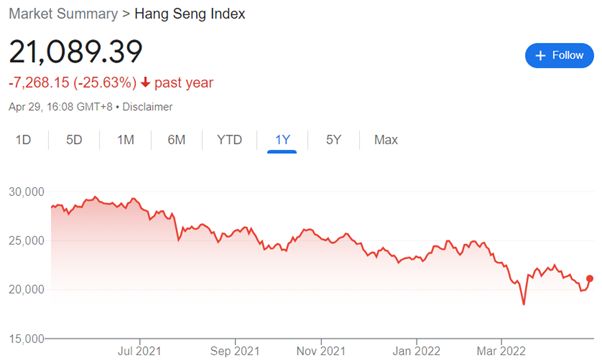 Some analysts see the recent drop in the valuations of Chinese stocks as a buying opportunity. Others see it as reflecting the increased forward-looking risk of China falling out with the West in a way that would seriously impact trade relations.

It may be too an extreme position for investors, especially those with a longer-term outlook, to entirely abandon emerging markets. However, some may now consider investing in emerging markets as a single, broad sector too risky. Especially when it comes to China.

An alternative could be investment trusts that focus on a single emerging markets country or region, avoiding direct exposure to China.