Despite the economic ravages of the Covid-19 pandemic, global stock markets are closing 2020 to strong gains and record highs. Does that seemingly conflicting logic make any sense on closer inspection? Can stock markets, encouraged by a return to normality later in the year as vaccination programs yield their end result, maintain their bullish trajectory? Or will 2021 bring an inevitable correction?

Stock markets have defied the odds to yield 2020 returns

As we enter the last few trading days of the year, many of the major stock market and sector indices around the world are at record highs. The best performer of all has been the tech-centric Nasdaq index on Wall Street, which is up almost 45% for the year – a spectacular gain. The broader-based S&P 500, considered the benchmark for the wider U.S. economy, is up by 15.5%. 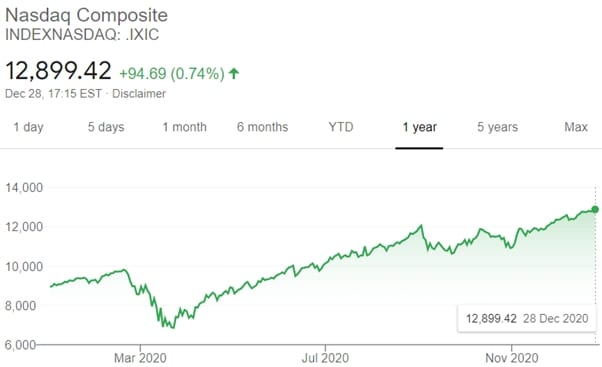 And stock markets are not just booming in the USA. The MSCI World Index, which is designed to reflect the global economy, heads into the end of 2020 up 13% on where it closed 2019.

Here in the UK, and Europe, stock markets have faired less well. The FTSE 100 is down around 12%. The broad Eurostoxx 600 index is down a little over 3%. The UK and Europe have had Brexit to contend with. And don’t have the same presence of the big technology companies that have driven gains in the USA.

But even with European stock markets mainly still down for the year, the extent of losses can quite easily be described as surprisingly low, against the backdrop of a global pandemic that has crushed economic activity. It could have been expected that Brexit uncertainty alone would justify that kind of underperformance compared to global markets. Yes, specific companies and sectors hit hardest by pandemic restrictions have taken heavier losses than the UK and European market averages.

But overall, it’s almost as if investors have chosen to ignore the economic impact of the pandemic, writing it off as a blip. Market performance seems to confidently state “we’ll be back to growth and make up lost ground in no time”. But is that realistic?

The impact of Covid-19 on the global economy

In October, the International Monetary Fund said that the global economy would contract by 4.4% this year. Thanks to the extent of the second wave of the pandemic over winter, that’s a forecast many consider optimistic. In fact, the forecast was broadly considered optimistic back in October when it was first made.

S&P Global expects the UK economy to shrink by around 10% in GDP terms over 2020 and PwC thinks 11%-12%. Analysts at both companies think a full recovery could take several years.

Prior to the pandemic, the U.S. economy was doing very well. Unemployment was at a 50-year low and inflation was also below the Fed’s target of 2.0%. But the impact of the pandemic saw ‘real’ GDP growth (i.e. the % increase/decrease in economic growth compared to one year prior, ‘net’ of inflation), fall by 31.40% during the second quarter. These are numbers not seen since the Great Depression.

Why have global equities markets kept on rising?

Despite the economic realities of the past 10 months, global stock markets are up. Is there any logic to that development? Or are we in a bubble that’s set to burst next year?

Let’s take a look at some of the factors that have supported the 2020 bull market that followed the initial sell-off at the start of the pandemic in late February and March.

Firstly, there’s been a lot of money printing. The Federal Reserve, European Central Bank, Bank of England and almost every other major central bank has been pumping a steady stream of newly created cash into the system.

That’s been happening since the financial markets crash of 2008/09, and to a large extent credited with driving the historical bull run for stock markets since. And the extent of money printing has reached a completely new level this year, dwarfing the previously unprecedented levels of quantitative easing seen over the decade before.

With all that money sloshing around the system, perhaps it should be no surprise markets are up. Especially as investors don’t have much choice. With interest rates historically low, the traditional refuge of fixed income securities that investors run to in times of trouble look especially unattractive. Holding the lowest risk bonds basically means losing money at the moment. And with interest rates unlikely to get much above 0% any time soon, or money printing ease, that driver of stock markets could persist well into 2021.

In an analysis for Forbes, Dan Runkevicius points out that while U.S. and global stocks are at their most expensive in history, or decades, by many metrics, they can also be considered to be at their cheapest level ever, when judged by one metric – “excess CAPE yield”. The excess CAPE yield is a metric established by Nobel prize-winning economist Robert Shiller.

Excess CAPE yield for the S&P 500 is calculated by taking the index’s average earnings yield over the past 10 years, minus the real, adjusted for inflation, yield on 10-year treasuries. It shows the premium that can be earned by investing a dollar in stocks instead of low-risk bonds. The chart below shows the current excess CAPE yield. 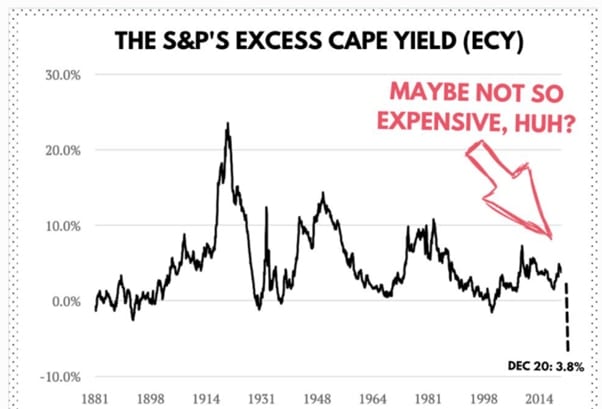 By the excess CAPE yield metric, the S&P 500 is at its most attractive level versus bonds since 2014. Schiller recently wrote:

“With rates so low, the excess CAPE yield across all regions is almost at all-time highs, indicating that relative to bonds, equities appear highly attractive.”

Internationally, over 40 years, the results are even more definitive. The only other time excess CAPE yield was this high globally was in the early 1980s. Global stocks are the most attractively priced against bonds in 40 years.

Schiller added that stocks in Europe, the UK, and Japan are even cheaper when judged on the same metric:

“The ECY is close to its highs across all regions and is at all-time highs for both the UK and Japan. The ECY for the UK is almost 10%, and around 6% for Europe and Japan.”

Schiller’s excess CAPE yield metric is perhaps the best justification for why investors have kept backing stocks this year, even at record valuations. There are simply no alternatives.

Setting the excess CAPE yield metric aside, stocks are historically expensive. Mr Runkevicius looks at the S&P 500’s valuations on the basis of the forward p/e ratio – the most popular gauge. By this metric, stocks are selling at their highest prices since the dot-com bubble.

Shiller’s p/e(CAPE)—a cyclically-adjusted “upgrade” to P/E— goes even further. This metric signals stocks have been more expensive only once in history: 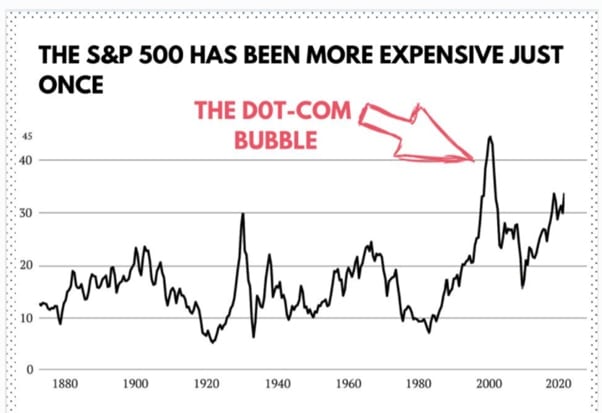 “Other measures that weigh up stock prices against business metrics—including EV/EBITDA, P/S, EV/Sales, EV/FCF—all are pointing to an insanely overvalued stock market”.

Do fundamentals no longer matter?

Usually, when a stock posts a significant rise, there’s a reason. It might not always make a lot of sense from a long-term investor’s standpoint, and it might not even be in the direction that you’d expect. But there’s typically at least a conceivable idea supporting the move.

However, there’s a strong argument that’s not always the case anymore. Especially when it comes to some of 2020’s biggest stock market winners.

Tesla has seen its value multiple by over 700% this year, to almost $630 billion. It’s the most valuable car manufacturer in the world, despite only selling a tiny number of vehicles, at less profit, compared to big traditional rivals worth far less. Tesla’s gains seemed to be driven solely by upward momentum and its inclusion into the S&P 500.

Newly public Palantir Technologies, a cyber security company, gained 21% in one day in early December after winning a contract from the U.S. Food and Drug Administration. However, it’s hard to figure out how a $44 million contract could justify a stock move that added more than $9 billion to Palantir’s market cap.

Virgin Galactic Holdings gained 18% after rescheduling a test flight that had been postponed. The postponement only sank the stock by 6%. The stock is now up more than 60% since then.

Investors often overreact to relatively small pieces of news. However, the extent of positive responses seems to be snowballing. And they tend to favour certain stocks.

Does that mean a 2021 correction is inevitable?

Stock markets do look expensive on most metrics. But the influence of the fact bond markets, traditionally buoyant during times of crisis, offer little incentive for investors, shouldn’t be underestimated. Nor should the extent of the newly printed money flowing into the system.

When you see signs of frothy markets, it’s always tempting to take drastic action. But even if market participants are being irrational, there’s no guarantee that things will change in the near future. Bull markets often run much further than anyone anticipates, even after fundamental signs would point to the need for a pullback.

There might be an argument to take some profit from investments that look like they have become particularly over-priced. But drastic action could well be a mistake, at least in the near future.

I personally think there will inevitably be a major correction at some point and keeping cash available to take advantage could be a good move. But that the correction will come in 2021 is far from inevitable. This bull market could have more time to run than many of the traditional valuation metrics would suggest.