Inflation was already a problem. The impact of the Covid-19 pandemic on supply chains and other overheads, coupled with the energy commodities inflation due to Russia limiting gas supplies to Europe in 2021 and bounce-back demand, has seen inflation spiral to 30 to 40-year highs. In January, the inflation rate hit 5.1% in the EU, 5.5% in the UK and 7.5% in the USA.

If, as now expected, Russian president Vladimir Putin gives the order for the invasion of Ukraine, commodity prices would be expected to rise even more. Other global providers can rally to keep the lights on in the European countries like Germany most exposed to Russian gas supplies. But a further tightening of already tight supplies will push oil, gas and coal prices up. That would be an inevitable consequence of the exports embargo on Russia that will follow military incursion into Ukraine.

Even if China buys more Russian commodities, freeing up supply elsewhere, it won’t fully compensate. As The Economist reports:

“The EU still takes 27% of all Russian exports; China about half that. The Power of Siberia gas pipeline that runs towards China will, when completed in 2025, carry only a fifth of what now goes to Europe.”

That means commodity prices will soar even more than they have over the past year if the geopolitical crisis on Ukraine’s border escalates into outright war and a Russian invasion of the country; regardless of whether that is limited to taking swathes of territory in the east, installing a puppet government in Kyiv or a full annexation.

Agriculture is Ukraine’s biggest export sector and wheat, corn and soya bean prices would see further inflation. Arlan Suderman, chief commodities economist at StoneX says that combined, Russia and Ukraine account for 29% of the global wheat trade. As a result, a war would exacerbate the already recently high food price inflation in the West.

Metals prices would also rise with Russia a major exporter. Even though Russia accounts for just 6% of global aluminium production, it is the world’s largest producer after China. 2018 U.S. sanctions against the Russian producer Rusal provide a taste of what might be expected for aluminium and the prices of other metals Russia is a significant source of.

Global aluminium supplies, especially in Europe which is the biggest buyer of Russian exports of the metal, are already in deficit. Smelting capacity in Europe has already had to shut down due to commercially unviable energy prices. Even higher energy prices plus restricted supply would be a major issue.

The nickel market is also concerningly tight already and Russia one of the biggest suppliers of the metal. 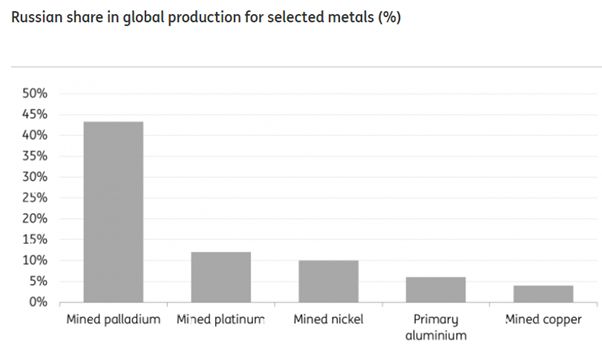 Invest in the companies that will benefit from soaring commodity prices

As we all consume and use products containing these commodities on a daily basis, price rises will inevitably hit us in the pocket. Our monthly bills are going to increase.

But one way we can at least partly compensate for that is to invest in the companies that will benefit from rising commodity prices. These are mainly companies that produce, sell and trade those commodities but aren’t directly exposed to Russia or in a limited way.

Oil and gas companies booked huge profits in 2021 thanks to rising prices boosting profits. BP’s 2021 profit was $7.57 billion and adjusted earnings hit an 8-year high. And while dividends paid out were still 18% lower than in 2019, investors benefitted from buybacks totalling $4.15 billion. The company’s valuation is up 45% over the past year. 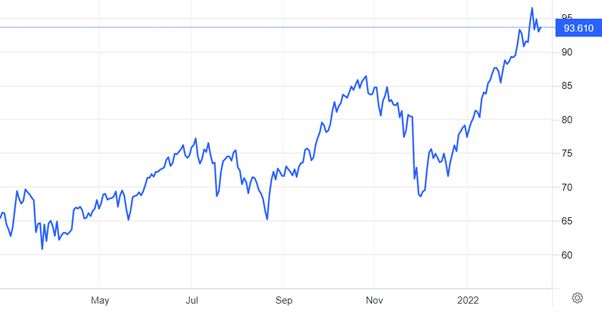 Rival Shell is only up 3.7% over the last 12 months but the company recorded adjusted earnings of $6.39 billion for 2021, up from $393 million a year earlier. Fourth quarter profits also reached 8-year highs and dividends and buybacks were also lifted. Crucially, the company doesn’t have the same exposure to Russia as BP does through its near 20% stake in the Russian oil company Rosneft.

London-listed Glencore could be one to consider. It is a major miner of copper and nickel which would be set for more big price rises if Russia invades and also has a successful trading business that would be expected to take advantage of soaring metals prices. Its valuation has gained 38% over the past 12 months.

For agricultural commodities and milling stocks that would be expected to gain from rising wheat and other cereal prices, investors should look to Wall Street. Companies to look at include Archer Daniels Midland (up 45% over the last 12 months).

For exposure to wheat futures, take a look at the  Teucrium Wheat Fund ETF.

These are just a handful of ideas but the principle is simple. If you want to fortify your finances against inflation, make targeted investments in the strongest looking publicly listed companies with high levels of positive exposure to the commodities expected to drive that inflation.

Whether or not Russia invades Ukraine, inflation levels were expected to be high this year. Now they are likely to be higher. But every crisis has its winners and this one’s would be expected to be the producers of the commodities driving inflation. Focus in on the stocks that will benefit from those price rises and identify any holdings you have in those that might particularly suffer to dial down exposure.