If you held or hold Netflix shares, hopefully your investments were well enough diversified for the streaming giant’s plunge in value to have stung rather than caused any serious damage to your portfolio. And if you have a long term horizon you might even have faith in Netflix’s powers of recovery.

The content streaming market will continue to grow for the foreseeable future. And Netflix is still the dominant player in television and film streaming, even if it is starting to see its market share eroded by increased competition and the end of Covid-19 pandemic lockdown restrictions. It’s far from inconceivable that Netflix’s value could eventually, probably not within months but given time, recover to the heights it reached last October. 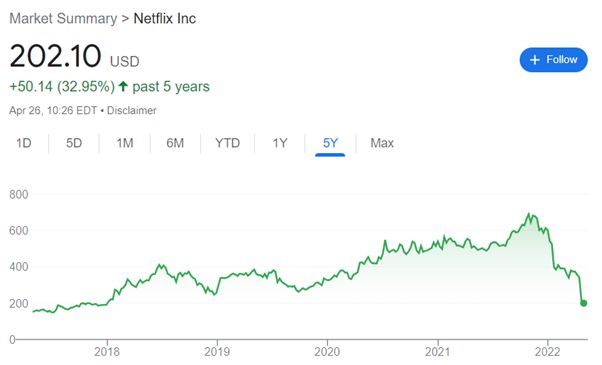 At its peak just six months ago, a single share in Netflix was worth $690.31. As of late April, you can pick one up for $202.66. That’s a fall of nearly 67% and would have been plenty painful for any investors over-exposed to the stock.

Are other companies at risk of their own Netflix Moment?

Hopefully that wasn’t you. But with stock markets and especially growth stocks considered to have a bright future on a tear from the beginning of the Covid-19 sell-off recovery in late March 2020 until the beginning of this year, other stocks could be vulnerable to their own Netflix moment of reckoning. 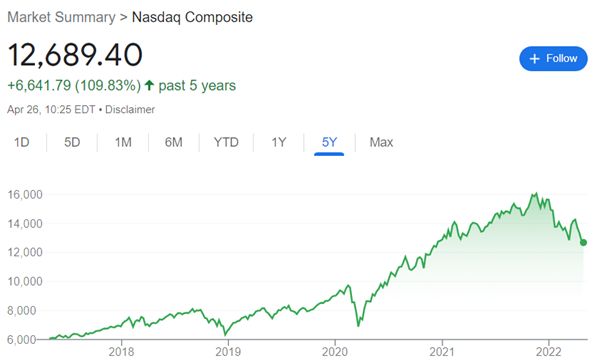 That’s despite the fact the International Monetary Fund expects the pandemic will cost the global economy over $12.5 trillion through 2024 and Statista says 2022 global GDP will be 4.5% lower than it would have been. The global economy fell to a negative growth rate of –3.12% in 2020 while global stock markets were soaring to unprecedented new heights from late March onwards.

Much of the growth from late March 2020 to the end of last year was driven by high growth technology companies like Netflix. Biotech was another sector to see among the most significant gains. But except for the sectors worst hit by the pandemic, like travel, tourism, hospitality and leisure and entertainment activities tied to bricks and mortar premises and groups of people in public spaces, markets generally did well.

Some analysts believe the huge gains experienced by markets at a time the global economy was taking a battering represented the ‘melt up’ at the end of the long bull run that has, discounting the correction between September and December 2018, been in place since 2009. Optimists said it reflected the growing value of especially technology companies in a world and economy whose digitalisation had been accelerated by the pandemic.

Almost four months into 2022 and it is looking increasingly like the sceptics were right. The Nasdaq has fallen almost 20% since the beginning of the year. There are other major factors involved in that. Inflation was already becoming a problem late last year and the war in Ukraine is intensifying that as energy and commodity prices spiral.

The geopolitical risks, reduction in consumer spending power and interest rate hikes that will be needed to control inflation are expected to lead to a global economic slowdown. That would always be a blow to stock markets but the fear is it could lead to particularly heavy losses for the many growth companies whose valuations look especially optimistic, even after the corrections over the early part of this year. 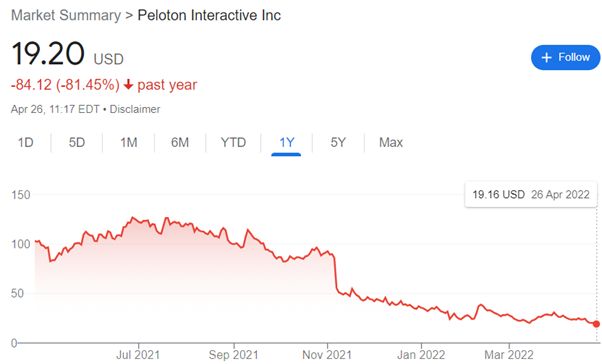 Netflix wasn’t the first of the “pandemic stocks”, companies that saw a surge in demand for their products and services as a direct result of the pandemic, to give those gains up as lockdown restrictions have been dropped. The upmarket exercise bike and fitness class streaming company Peleton has seen its valuation plummet by over 80% in the past year. Video conferencing app company Zoom has seen its share price fall by over 70%.

But others could be yet to experience their own precipitous falls from grace. Companies whose revenues were less directly or less influentially boosted by the pandemic than the three mentioned but whose valuations have soared over the past couple of years could also be on the verge of a Netflix-moment lopping a massive chunk from their market capitalisation.

How to tell if a stock is overvalued

Judging if a stock is overvalued is unfortunately not as simple as running a handful of equations. Well, in some ways it is but there are external factors and nuances to take account of. How a company is valued also varies from company to company.

A real estate company’s valuation is much more focused on the market value of its property assets and flow of rental income. That obviously doesn’t work for a company like Netflix, which is based on a digital product and owns relatively little in the way of tangible, physical assets relative to its overall valuation. It does own intellectual property in the form of its catalogue of proprietary content. But, ultimately, investors have valued Netflix on the basis of its leading position in a growing market and the future revenue generation potential that implies.

Netflix losing market share to new competitors like Disney+, AppleTV+ and HBO Max was expected. As was a slowdown in the rate of growth the company had experienced over the pandemic. What wasn’t anticipated is that the company would swing to negative growth last month.

But the extent of the sell-off, the company has lost 70% of its value in the past 6 months and 48% in the last month, seems to go beyond a poor quarter. A 35% plunge in value in one day, with further subsequent losses, indicates investors suddenly reached the conclusion Netflix was heavily overvalued before the release of the disappointing figures that catalysed the share price drop.

The difficulty in assessing the value of a company like Netflix was summed up by Pershing Square founder Bill Ackman, who sold the hedge fund’s stake in the company last week at a £310 million loss. It was only acquired three months earlier for over £850 million. The reason Ackman gave for selling was that the hedge fund’s stockpickers had “lost confidence in our ability to predict the company’s future prospects.”

It’s unclear if that statement referred to Netflix’s prospects as a market leader in video content streaming or how stockmarkets would value it. Ackman probably meant a bit of both.

Professionals struggling to judge if a company is overvalued or not highlights the problem facing small private investors. But there are metrics you can look at for clues stocks you hold could be at risk of value crash.

In the UK, the average p/e of listed companies is around 15 and that rises to 23 for Wall Street-listed companies, reflecting the greater weighting towards growth companies. However, just looking at p/e in isolation can be misleading and it should be assessed in the context of peers and a company’s historical p/e. Investors put more emphasis on future revenue potential when valuing growth companies.

But even with those caveats, a look at the Netflix p/e could have alerted shareholders to the danger the stock had become overvalued. At its height last year Netflix’s p/e had reached 60 and it’s now around 20.

However, Netflix’s p/e had been trending down since 2015 as the business matured and its revenues grew. Its historical averages over the last 12-13 years were in fact higher than the x60 p/e the stock crashed from.

What appears to have sparked the correction in Netflix’s value was instead investors reclassifying the company as no longer a ‘growth’ stock. The end of the company’s decade long run of high growth came to and end and investors decided to revalue it.

P/E is an important metric for investors to keep an eye on. When Zoom’s share price rocketed in spring 2020 its p/e hit x750. Since then its value has shed over 70% and its p/e dropped back to a little over 21. Investors who had paid attention to the company’s out-of-control p/e ration would probably have sold back in April or May 2020.

As the Neflix example shows, just looking at p/e is not enough. Especially in the context of quickly growing companies built on new technologies. Growth trajectory is also key. If a company has a high p/e, it could be sustainable as long as it maintains high rates of growth. As an investor, you don’t want to miss out on big gains by being too cautious and the companies that return the best gains tend to have high looking p/e ratios.

But if you also don’t want to be caught out by a ‘Netflix moment’, consider locking in profits at the point a growth company’s growth rates start to look vulnerable.