HSBC doubles down on pivot towards Asia as profits plunge

HSBC is to strengthen its focus on Asia by investing $6 billion in growing its business there while exiting retail banking operations in the USA and France. The bank’s update on its strategy also told investors it plans to almost halve its global office space and relocate staff from London and other European locations to important Asian markets such as Hong Kong and Singapore.

Most of the $6 billion (£4.3 billion) investment in Asia will be focused on HSBC further developing its wealth management business in greater China and Asia more generally. The decision to reduce international office space by 40% over coming years also indicates the bank is convinced the Covid-19 pandemic has resulted in long term changes to working patterns.

HSBC chief executive Noel Quinn did, however, reconfirm the UK-headquartered bank’s commitment to Canary Wharf in London, where it will retain a major presence.

The changes coming up for HSBC are part of a bigger picture and the fact the bank has always earned most of its revenues and profits in Asia, despite a global presence. However, the impact of the past year and Covid-19 pandemic appears to have reinforced the commitment to focus much more on Asia. HSBC reported a 34% drop in pre-tax profit in 2020, which was largely put down to the influence of the pandemic. 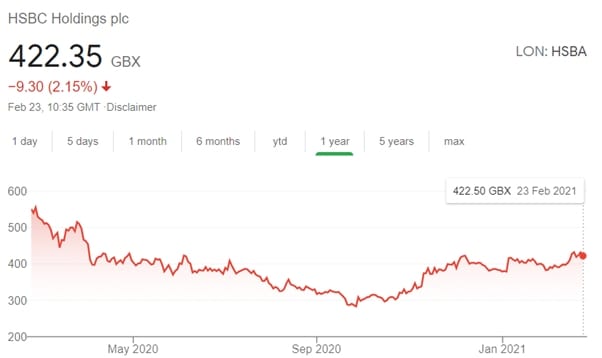 The bank’s revenues fell by less than its profits, down 10% to $50.4 billion. However, that indicated an uneven spread of where profits are generated – a major reason why HSBC is keen to refocus on and invest in the activities and regions where it makes money. The downturn was attributed to lower interest rates over the past year as central banks slashed base rates as an economic stimulus measure. Asian economies have been far less impacted by the Covid-19 pandemic than those in Europe and North America.

The bank has admitted defeat in achieving a target it had set to provide a return on tangible equity of between 10% and 12%, dialling that back to a top target of 10% over the medium term. However, dividends will be resumed after the regulator dropped its temporary moratorium on returning cash to investors over the course of the pandemic. A 2020 dividend of $0.15 per share will be distributed.

“It’s understandable that there is to be a refocus on HSBC’s investment arm, given that it’s already injected a dose of short term relief with a spike of trading and hedging activity during the pandemic, which will help the group weather further turbulence.”

“That could come in the form of fresh political risk given how relations between the West and China have taken a fragile turn in recent years.”