Britain’s big banks may have toed the line and even publicly made statements supporting the command from the Prudential Regulatory Authority (PRA) to scrap planned dividend payments, share buyback schemes and bonuses for senior employees. But it seems that behind closed doors at least one of the major London-listed banks was far from happy at the Bank of England’s sector regulator interfering in their corporate management.

Reports in the Financial Times today suggest that the turn of events has sparked new debate at the top level of HSBC on whether the bank should reconsider its decision to remain domiciled in the UK. HSBC was due to make the largest dividend payment of the five banks the PRA threatened with supervisory action if they went ahead.

But the bank also generates as much as 80% of its profits from Asia and Hong Kong-based retail investors hold as much as 30% of the bank’s issued equity. The bank’s senior management argue that these shareholders count on HSBC dividends as part of their income and they have reacted with anger at the PRA’s move.

One unnamed HSBC director was quoted as commenting:

“For the regulators at the Bank of England to put a gun to the head of the board of directors is terrible. This should be a decision for the board to take. We should not be in the UK. The calls for redomiciling will increase.”

HSBC’s share price slumped by 9.5% yesterday, resulting in $8 billion being wiped off the bank’s market capitalisation. The tumble has continued today with the share price down another 3.4% towards the end of morning trading. 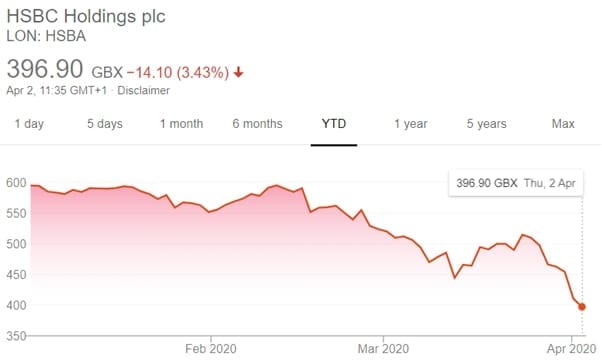 Executives believe that the share price fall has been made worse than the simple impact of the dividend being cut by giving a false impression that the bank’s capital position is weaker than it is.

However, while there is anger among a section of executives, the organisation’s official stance is that the banking group understands the reasons behind the BoE regulator’s position on dividends.

A spokesperson for the bank also denied the question of domicile may be reopened:

“There are no discussions to review HSBC’s global headquarters and no plans to reopen the issue.”

HSBC was founded in Hong Kong in 1865 and only moved its legal domicile to London in 1993. That decision was made at the time to grease the wheels of its takeover of the UK’s Midland Bank. A review of that decision culminated in a 2016 commitment to keep the bank’s official HQ in London.

Tuesday’s announcement that HSBC would bow to the PRA’s pressure to scrap the release of the 2019 dividend, and make no other dividend payments in 2020, was explained in person to top shareholders over calls made by group chairman Mark Tucker.

Ronit Ghose, Citigroup’s head of bank analysis commented on the fallout of the decision with:

“Being a UK listed company has many advantages — the rule of law, London’s talent and intellectual capital, the timezone — but when Hong Kong woke up they were thinking ‘what just happened in London?’.”

He added that prior to the financial crisis, banks such as HSBC and Standard Chartered were able to operate with “less capital and higher credit ratings because of the halo of being an international bank in London. Now there is a question mark about whether it is better to be headquartered in Singapore or Hong Kong.”

However, senior figures at the bank are also wary of the risks attached to a return to Hong Kong – specifically that posed by China’s Communist party. A UK shareholder is quoted as reflecting on that topic with:

“HSBC likes the fact they’ve got some sort of defence against China. I could see why [Hong Kong] retail investors would be irritated, but it’s the price to pay if you’re going to domicile in the UK with all the protection that gives you.”

Should you be taking more or less risk...

Is nuclear fusion the key to a clean...

It might be time for investors to position their portfolios to take advantage of... END_OF_DOCUMENT_TOKEN_TO_BE_REPLACED

Cybersecurity firm Darktrace has announced plans for a London IPO in a move that... END_OF_DOCUMENT_TOKEN_TO_BE_REPLACED

20 years ago, an investment in the current generation of giant technology companies such... END_OF_DOCUMENT_TOKEN_TO_BE_REPLACED