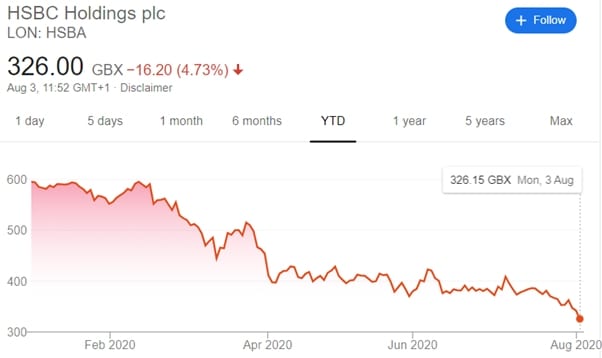 Bad loan provisions increased by $1.2 billion on last year to a total of $6.9 billion as HSBC braces itself for the full economic impact of the Covid-19 pandemic. Investors were warned that total charges for loan losses are expected to reach between $8 billion and $13 billion over the entirety of 2020. Revenues slid 9% on last year to $26.7 billion.

HSBC is the UK’s largest bank by market capitalisation, though it is far more active in emerging economies than it is in the UK itself. Founded in Hong Kong in 1865, the majority of the bank’s profits are still generated in Hong Kong. With a significant presence in the USA also, the bank has recently found itself between a rock and a hard place in trying to negotiate the current economic disputes and tensions bubbling between the White House and Beijing.

HSBC chief executive Noel Quinn did not try to downplay the impact the ongoing U.S.-China trade war is having on the bank, telling investors this morning:

“Tensions between China and the US inevitably create challenging situations for an organisation with HSBC’s footprint. We will face any political challenges that arise with a focus on the long-term needs of our customers and the best interests of our investors.”

In an attempt to steady the ship, Mr Quinn told HSBC investors that major restructuring plans announced in February, including reducing its current 235,000 workforce to 200,000, will be accelerated. The economic impact of the Covid-19 pandemic, the rock bottom interest rates introduced by central banks around the world and the geopolitical risk that currently acutely impacts HSBC are all contributing to the uncertainty that Mr Quinn said means the bank’s future dividend policy is also being reviewed.

The bank warned that performance over the remained of 2020 and 2021 will to a large extent rely on the effects of potential new waves of the Covid-19 virus around the world.

Analysts at U.S. investment bank Jefferies said the higher than expected impairment charge was “disappointed”. The bank added that a widened guidance range for bad loans, up from $7 billion-$11 billion to $8 billion-$13 billion was “unhelpful”, and that credit costs, primarily in the UK, had come in as “higher than expected”.

Investec analysts were a little more upbeat, commenting that a pre-provision drop of revenues by just 4% could be considered “resilient”.