The HSBC share price has remained largely flat today, inching up just 0.2% by early afternoon on Monday, despite the Asia-focused bank announcing a doubling of its first half profit to almost $11 billion.

The bank also announced the resumption of dividend payments after the Prudential Regulation Authority, the Bank of England’s banking sector regulator, announced the end of restrictions placed on paying out dividends during the Covid-19 pandemic. The regulator had wanted banks to retain cash as an extra buffer against a feared tidal wave of loan defaults.

In the end the pandemic placed little systemic pressure on banks, in large part due to extensive government support shoring up the worst affected businesses and preserving jobs. Extra reserves can now be released and returned to investors in the form of dividends. 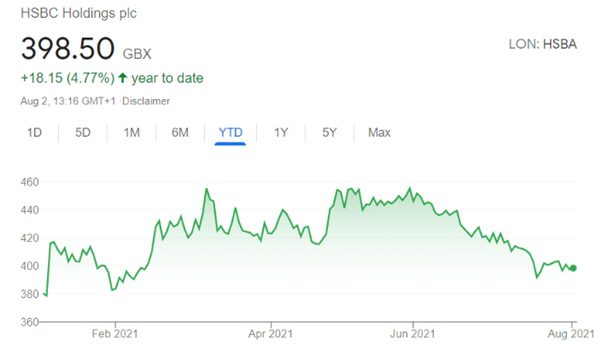 Pre-tax profits of just $4.3 billion over the first six months of 2020 grew by well over 100% to $10.8 billion. The final total was also comfortably ahead of the $9.5 billion profit analysts had been predicting. As was the case with banking sector peers like Lloyds, Barclays and NetWest, who all announced their results to investors last week, HSBC’s bottom line has been boosted by the release of the additional cash buffer that had been set aside.

Last year’s results were dragged down by a $6.9 billion impairment charge taken on the value of the bank’s loan book. This year they were boosted by $719 million of cash released back into active service.

The good news was, however, tempered by the fact revenues were down to $25.6 billion compared to $26.7 billion over the same six months a year earlier as the impact of rock bottom interest rates fed through. HSBC’s net interest margin, the difference between what it pays depositors and what it earns as a lender, fell to 1.21%, a drop of 22 basis points.

HSBC, traditionally one of the biggest dividend payers on the London Stock Exchange, will pay shareholder an interim dividend of 7 cents-a-share. That should bring it back to within its target dividend ratio of 40%-55% of earnings per share by some point next year.

Noel Quinn, the bank’s chief executive, commented on the first half results:

“These are good results that reflect the return of growth in our main markets and marked progress in the execution of our strategy.”

“We were profitable in every region in the first half of the year, supported by the release of expected credit loss provisions. Our lending pipeline began to translate into business growth in the second quarter and we further strengthened that pipeline during the half.”

HSBC, on of the biggest banks in the world, is doubling down on its focus on China and other fast-growing emerging markets in Asia, where it makes the majority of its revenue. It is reducing costs and operations in other markets in favour of Asia, including cutting 35,000 jobs and withdrawing from its French retail business, whose sale was announced in June. The target is to reduce costs by a total of $4.5 billion by next year.