The Hut Group share price has gained over 3% today after the recently floated ecommerce group upped its annual revenues forecast for the second time in as many months. An unscheduled trading update released today informed investors that strong sales over the start of the peak Christmas shopping period mean it now anticipates annual revenue growth to come in at between 38%and 40% year-on-year. Previous guidance had been for 30% to 33%. 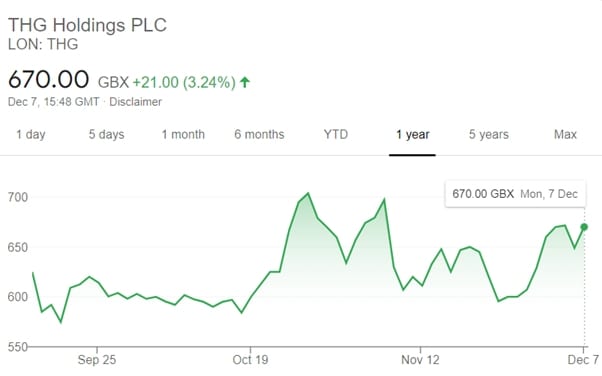 The Hut Group (THG) told investors and the market that “very strong performances during Singles Day, Black Friday and Cyber Week”, meant sales are ahead of forecasts across all of its divisions over the fourth quarter.

It’s now the second time since THG went public in September that the company has raised its forward guidance for the year, with the first upwards revision coming in October. Total revenues for the year are now expected to hit between £1.57 billion and £1.6 billion.

THG’s business is focused on a collection of online-only beauty and nutrition brands, with Myprotein and Look Fantastic among the best known. It also has a technology business, THG Ingenuity, licensing its proprietary ecommerce platform to other retailers, including Nestle. Now valued at over £6.5 billion, the company has come along way since founder Matthew Moulding started it in 2004 as a website selling DVDs online.

When the company went public in September, priced at 500p-a-share for a total valuation of £5.4 billion, it was the biggest listing on the London Stock Exchange since Royal Mail was privatised in 2013. The THG share price has since gained almost 35%.

Mr Moulding has plenty of incentive to keep the share price motoring along. Under a share incentive scheme, he will be awarded 700 million shares, taking his personal stake back up to 25.1%, if the company’s valuation reaches £7.25 billion. At its current rate of progress, reaching that milestone may take far less time than might have been expected. Many of the company’s other employees will also receive a share of millions of pounds worth of shares if the target is reached.

If THG was a constituent of the FTSE 100, which its valuation would comfortably qualify for, it would most likely have already hit a £7.25 billion valuation thanks to index tracking investors automatically snapping up shares. However, THG opted to not go public with a ‘premium’ listing that would have qualified it for inclusion in the UK’s benchmark index.

Mr Moulding insisted on a number of guarantees and privileges that would ensure he maintains firm control over the company he founded and means it is not in danger of hostile takeover bids. Those include him retaining the roles of both chief executive and executive chairman, as well as holding a ‘golden share’, that allows him the right of veto on any board decisions.

Those aberrations from accepted corporate governance best practise standards mean that THG cannot be included in indices. But it’s a trade off Mr Moulding believed was in both his and his company’s best interests. So far, it seems to be working out well for both himself, the company’s staff and other THG shareholders.

In its trading update today, THG informed that active customer number over November reached 1.7 million – a 74% improvement on the same month in 2019. Customer retention rates and average spend by customer have also shown positive improvement.

However, despite adjusting expected annual revenues upwards, the company has maintained its previous guidance on its expected bottom line. The company said it expects this year to result in“stable adjusted EBITDA [earnings before interest, tax, depreciation and amortisation] margins”.

With bond yields at historical lows, they are not a particularly attractive investment for... END_OF_DOCUMENT_TOKEN_TO_BE_REPLACED

Most of the world’s investment capital is held in the stock of companies known... END_OF_DOCUMENT_TOKEN_TO_BE_REPLACED

It’s not so long ago millennials and Gen Z were being criticised for spending... END_OF_DOCUMENT_TOKEN_TO_BE_REPLACED