The Hut Group’s share price has soared by 32% on their IPO price this morning shortly after the opening bell at the London Stock Exchange marked the company’s first as a publicly traded stock. The online retailing group, which owns brands including MyProtein and LookFantastic, raised £1.88 billion through selling shares at 500p each.

The share price reached almost 650p in early trading as investors moved to get in on the action. The Hut Group was already the UK’s most valuable internet company at the IPO market capitalisation level of £5.4 billion and looks set to close today’s session at over £7 billion. 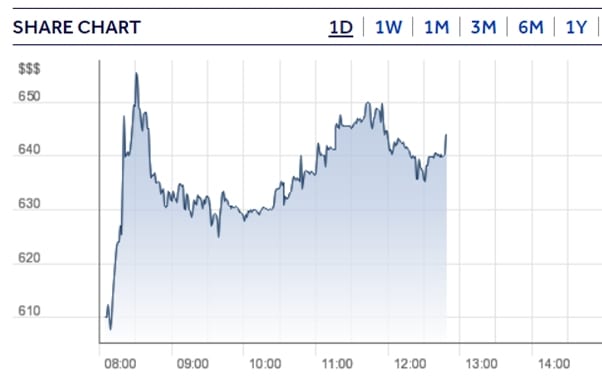 The Hut Group’s stock is not even trading fully publicly yet, with buying and selling restricted to investors who took part in the IPO. That means the 30%+ surge in the share price has been driven by institutional investors who bought shares in the IPO buying up more from others who also did but are willing to cash in for a quick profit.

On Monday, trading in the Hut Group’s stock will be open to the general public, with only institutional investors invited to take part in the IPO. With some much early demand from the original IPO investors, there appears to be a strong chance of further gains early next week.

“I am delighted that THG has received such strong support from some of the world’s largest investors.”

The stock’s popularity with institutional investors is especially notable for the fact the IPO included terms that would not ordinarily be considered best practise for corporate governance.

Mr Moulding not only retained a ‘founders share’, which protects his control of the company by giving him a right of veto in the case of an aggressive takeover approach. He also signed an agreement that saw the company’s property assets transferred to a company he controls ahead of the IPO. He will receive annual rent of £19 million from The Hut Group, for use of the commercial properties.

Institutional investors rejected the proposals outright on corporate governance concerns then, which eventually led to the IPO being cancelled. However, comparably unorthodox demands by Mr Moulding have not discouraged investors this time around. Presumably because The Hut Group is profitable, with Mr Moulding’s leadership seen as key to its historical and continuing success. Mr Neumann came to be seen as something of a liability for WeWork.