The IAG share price has recovered from a 1.2% dip in early trading to remain flat on yesterday’s close despite announcing a loss of €1 billion over the first three months of the year. Investors have reacted neutrally to the expected loss, which takes the total bill for the Covid-19 pandemic to €11.5 billion of debt.

The airline operator, which owns BA as well as Spanish airline Iberian and budget carriers Aer Lingus and Vueling, suffered a total loss €7.4 billion over 2020 and yesterday appealed to the British government to offer more clarity on expected travel restrictions and freedoms over coming months. IAG currently plans to operate no more than a quarter of its usual schedule over the spring period. 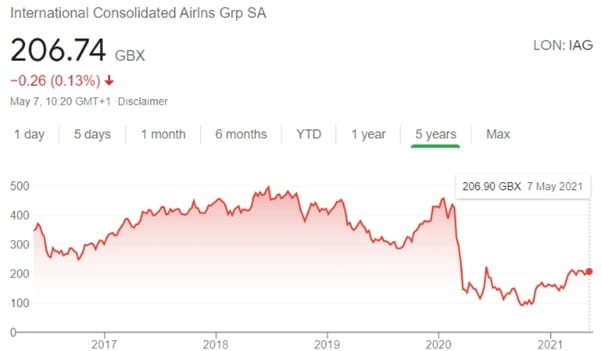 The company yesterday told the government “we’re ready to fly”, and that a lack of guidelines over which international destinations will be approved for British tourists and travellers is the only bottleneck to a fuller schedule. The company, which was formed a decade ago as a result of a merger between British Airways and Spanish airlines Iberia and Vueling, before subsequently adding Irish national carrier Aer Lingus, is particularly exposed to passenger numbers between the UK and Spain. Together with Lufthansa group and Air France-KLM, IAG is one of Europe’s big three airline groups.

Over the January-March quarter at the beginning of the year, IAG operated at less than 20% of its pre-pandemic capacity, carrying just 2.6 million passengers compared to 19.8 million over the same period a year earlier. The company has offset a small fraction of its devastated schedule by operating cargo-only flights, bringing in a total of €963 million. A year earlier, revenues over the quarter stood at €4.5 billion.

The airline further cautioned over the quarter to the end of June:

“Current passenger capacity plans for the second quarter are for around 25 per cent of 2019 capacity but remain uncertain and subject to review.”

“We’re doing everything in our power to emerge in a stronger competitive position. We’re absolutely confident that a safe restart to travel can happen, as shown by the scientific data”.

2020 was a disaster for income investors as the onset of the coronavirus crisis... END_OF_DOCUMENT_TOKEN_TO_BE_REPLACED

With gains of 21% since the beginning of the year, commodities has been the... END_OF_DOCUMENT_TOKEN_TO_BE_REPLACED

The London-listed mining company Rio Tinto has just announced it will pay out record... END_OF_DOCUMENT_TOKEN_TO_BE_REPLACED

Since he founded it as an online bookseller from the garage of his rented... END_OF_DOCUMENT_TOKEN_TO_BE_REPLACED

Last month the board of Wm Morrison, the UK’s fourth largest supermarket chain by... END_OF_DOCUMENT_TOKEN_TO_BE_REPLACED