The IAG share price fell by another 4.5% after the British Airways owner offered an unscheduled trading update on Wednesday that announced it had sustained losses of €1.3 billion over the third quarter. A year earlier, IAG recorded a €1.4 billion profit over the same period. Over the three months between July and September, International Consolidated Airlines Group saw revenues drop 83% year-on-year to a total of €1.2 billion.

Over the third quarter, IAG operated at a flight capacity that was reduced by 78.6%, alongside an 88% plunge in demand for ticked. Average seats occupied per flight as just 48.9%, compared to 87.7% over the same period a year earlier. 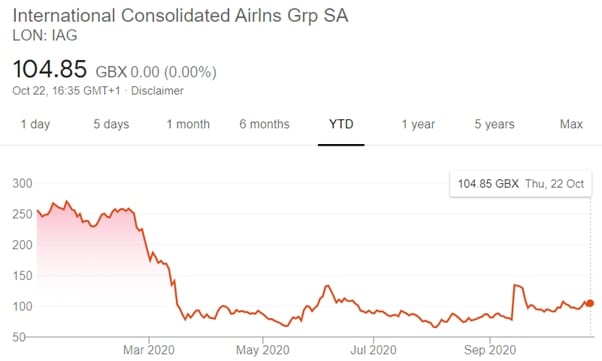 The company also informed investors and passengers that its flight capacity over the 4th quarter will be again slashed from around 40% to “no more than 30% of 2019 levels”, as it seeks to stem losses on unprofitable routes operating with low passenger numbers.

A loss for the summer quarter had been expected but analysts had estimated it at around €920 million – almost 40% lower than the final liability proved to be. The reduced capacity over the winter holiday season means IAG has given up lingering hopes it might be able to achieve a break even point in net cashflows over the final three months of the year.

New localised and national lockdowns over recent weeks as the ‘second wave’ of the Covid-19 pandemic has taken grip has seen bookings until the end of the year fail to develop “as previously expected”. Measures that would have been expected to boost airline passenger confidence, such as travel corridors and pre-flight testing for Covid-19 have also, say IAG “not been adopted as quickly as anticipated”.

IAG becomes the latest major European airline to further reduce its winter schedule with others including Easyjet and Ryanair already having done so as a result of muted demand. IAG, whose airlines include British Airways, short-haul budget airline Vueling and Aer Lingus, flew around 118 million passengers last year and was operating 570 aircraft and employing 64,000 staff before the pandemic struck.

Parallel to having to find ways to deal with an historical shock plummet in demand for air travel, IAG is also transition between chief executives. Luis Gallego succeeded Willie Walsh in the top job last month and his arrival has seen a management reshuffle. Air Lingus boss Sean Doyle took over as head of BA, replacing Alex Cruz. IAG chief financial office Stephen Gunning commented on the unscheduled trading update:

“Recent overall bookings have not developed as previously expected due to additional measures implemented by many European governments in response to a second wave of Covid-19 infections.”