The IAG share price has today reclaimed a good chunk of the losses it suffered yesterday after it suffered from the sell off that hit the airlines sector in the wake of Russia’s invasion of Ukraine. The company’s valuation is still over 7% down on where it ended last week but the company’s shareholders will go into the weekend in a better mood after today’s gains which currently stand at 3.6% heading into the last hour of trading.

The company’s share price has been buoyed by the British Airways owner’s announcement today that it expects to return to profit this year despite a slow start thanks to strong forward sales for the Easter and summer periods. IAG also told shareholders it will embark on a €3.9 billion spending splurge that will see it replace ageing fleets with more fuel efficient and environmentally friendly aircraft. 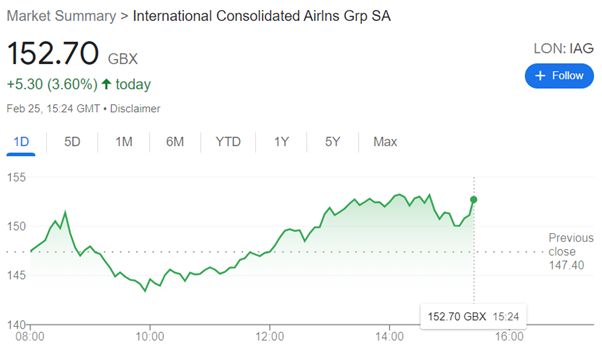 The airline’s chief executive Luis Gallego, who assumed his role during the pandemic to succeed predecessor Willie Walsh, promised shareholders a bright future today, vowing to do things differently to reverse a decade of what is broadly seen as a decline in standards and industrial relations.

The group, which as well as BA owns the Spanish airlines Iberia and Vueling and Ireland’s Aer Lingus, fell to a heavy €2.76 billion loss last year. While that was far from positive analysts had feared worse and it was a big improvement on the €7.45 billion loss suffered in 2020.

But Gallego is convinced 2022 will see both a return to profit and a strong recovery fuelled by a combination of pent-up demand from tourists and IAG itself doing things “differently”. The first quarter of 2022 is again expected to result in a “significant” operating loss greater than the normal loss traditional for the period. However, barring new disruptions such as fall out from the geopolitical situation in Ukraine and potential new variants of the Covid-19 virus, the company said it expects:

“..its operating result to be profitable from quarter two, leading both operating profit and net cash flows from operating activities to be significantly positive for the year.”

IAG’s Spanish airlines are seeing a faster recovery than BA or Aer Lingus and flew fourth quarter schedules that represented 58% of pre-pandemic capacity. The current schedule has risen to 65% of that pre-pandemic and expected to reach 85% over the whole year.

Net debt was reduced over the second half of 2021 thanks to €1 billion of cash inflows but remains at a somewhat concerning €11.6 billion. However, despite that the company plans to start spending heavily after only €700 million, half of what it had expected to pre-pandemic, of capital expenditure.

It will now spend €3.9 billion catching up with a backlog of orders for 55 new short-haul and 49 new long-haul aircraft. 25 new jetliners are expected to be taken delivery of over 2022.