The International Energy Agency (IEA) believes oil markets face “the biggest supply crisis in decades” if Russian oil is removed entirely or in part from the market. The warning comes despite the cost of a barrel of Brent crude dropping back below $100 today on concerns China’s economy may slow down as Covid-19 surges in the country. A barrel of Brent crude reached a high of over $128-a-barrell earlier in the month due to Russia’s invasion of its neighbour Ukraine. 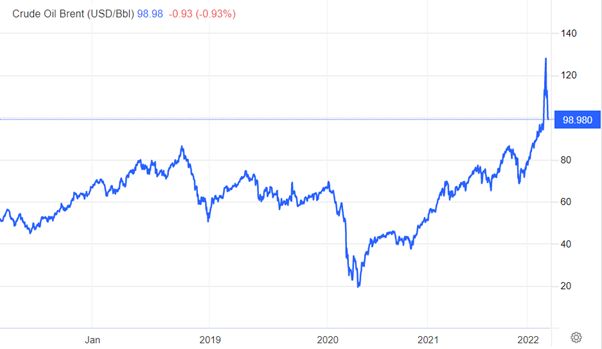 The IEA’s warning comes as it looks increasingly likely that Russian supply of up to three million barrels of oil a day, around 3% of global supply, could be taken out of the market from next month due to a combination of sanctions and buyers refusing it. If Saudi Arabia and the UAE, the only two suppliers believed to have the spare capacity to compensate Russian supply, don’t agree to open the taps wider, the removal of Russian oil from the market is “threatening to create a global oil supply shock”.

That’s currently far from certain despite lobbying from Western economies, including UK premier Boris Johnson travelling to Saudi Arabia this week. The IEA said today that the two key suppliers are for now “showing no willingness to tap into their reserves”.

It went on to paint a bleak picture, adding:

“The implications of a potential loss of Russian oil exports to global markets cannot be understated. Surging oil and commodity prices, if sustained, will have a marked impact on inflation and economic growth.”

Even if high oil prices of around or over $100 a barrel stifle demand growth this year, the IEA warns the global market could still face a shortfall of up to 700,000 barrels a day by the second quarter unless Saudi Arabia and the UAE step up to fill it. Oil prices have been volatile since February as Russia’s army was massed along its, and ally Belarus’s, borders with Ukraine. At one point in early March the oil price spike to $139 a barrel.

The IEA was established as a forum for international energy cooperation in 1974 after the 1973 oil embargo decreed by the Saudi Arabia-led Organization of Arab Petroleum Exporting Countries. The embargo, which banned exports to a list of countries including the UK, Netherlands, Canada, U.S. and Japan, targeted nations that had supported Israel during the Yon Kippur War. Its role includes coordinating the release of emergency oil stocks in the event of supply shocks. Its members agreed to release 60 million barrels of crude earlier this month, representing the largest stock release in the IEA’s history.

While only the USA has placed an outright ban on Russian oil and gas imports, oil companies, traders, shipping companies and banks are refusing to deal with the country’s supplies. Russia has been described as now “a pariah for many in the market”.

“The bloc has repeatedly spurned requests from the US and other oil consuming countries for higher volumes to tame the oil price rally. Contributions from other countries will be marginal in the very near term, with industry and government stocks needed to fill the gap.”