The London-listed mining company Rio Tinto has just announced it will pay out record half-year dividends totalling $9.1 billion, sending its share price to new record highs. The miner, one of the world’s largest producers of iron ore and its derivatives which it digs out of Western Australia’s Pilbara region, will make the payment via a $6.1 billion ordinary dividend topped up by a $3 billion special dividend.

Rio Tinto is in a position to lavish its shareholders with such gifts because it has just banked interim net profits of $12.3 billion. That’s more than its total profits for the whole of 2020 and a huge leap from the $3.3 billion banked over the same period a year ago.

Rio Tinto, and other companies exposed to commodities prices, have had a good several months. The miner, also listed on Australia’s ASX, has seen revenues soar thanks to a massive rebound in demand for iron ore from China, its most important customer. Prices have risen above $200 a tonne from under $100 at the start of 2020.

A Fortune article examining the school of thought we may have entered the 5th commodities ‘super cycle’ of the industrial era highlights the examples of Cargill Inc., and Trafigura Group.

Cargill, the world’s largest agricultural commodities trader and one of the largest traders across commodities categories, has made more money over the first 9 months of its fiscal year, from October 1 2020 to June 30 2021, than in any full year in its history as it brought in net income of over $4 billion.

Trafigura Group, the world’s second-largest independent oil trader posted a net profit of over $2 billion for the six months to the end of March. That’s almost as much as it made over its best ever full year, prompting chief executive Jeremy Weir to comment:

“Our core trading divisions are firing on all cylinders.” 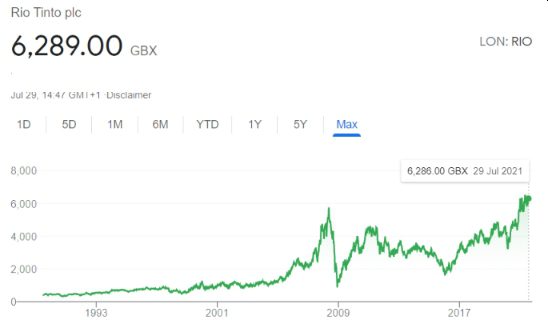 Since a five year bear market culminated in low of 1653.5p in January 2016, the Rio Tinto share price has gained over 280%. Good management has certainly made a strong contribution to Rio Tinto’s recent success but so have commodity prices. Companies across the sector have enjoyed similar trajectories.

If, as many sector analysts are anticipating, commodity prices remain strong for the foreseeable future, should investors consider exposure to miners and commodities themselves?

Many believe the cyclical sector’s good times will continue for a while to come. Let’s take a look at the factors underpinning commodity prices and address the question of if we have embarked on a new commodities super cycle.

The commodities market in 2021

Over the first six months of 2021, commodities have been the best performing asset class in the world, with only the wildly volatile cryptocurrency matching its 21% return. Even U.S. equities, on a rip this year, have only returned 15%. 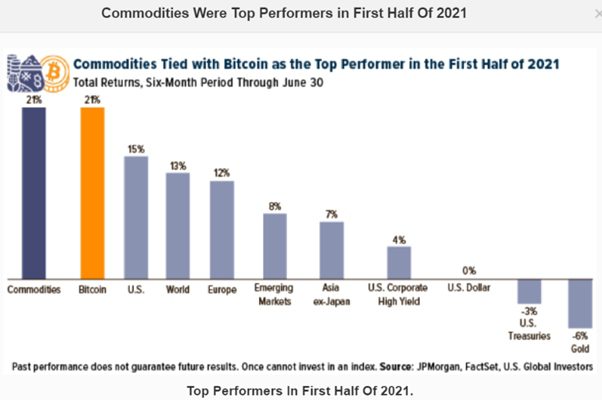 Oil has been the commodity with the largest gains this year after a rebound from prices that fell through the floor in spring 2020 as the Covid-19 pandemic took hold and large energy-intensive buildings were moth-balled around the world and long distance travel largely ground to a halt.

As demand has started to return oil prices have roared back to around $75 a barrel. Natural gas prices have similarly benefited and corn is trading at multi-year highs due to a combination of demand from China and poor weather in Brazil hitting supply. Many other agricultural commodities are also at or near multi-year highs. 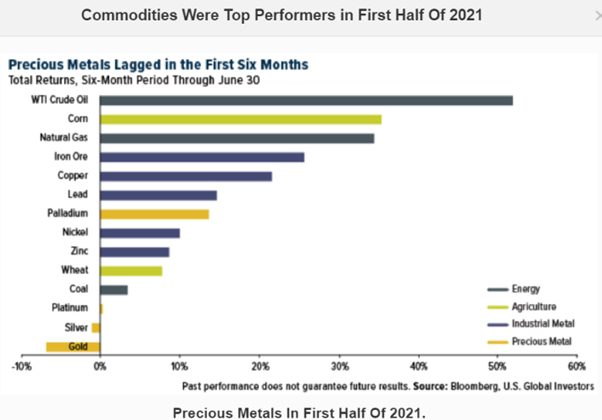 But it’s the prices of construction materials and industrial metals that miners like Rio Tinto are benefiting from most. Iron ore, copper, lead, nickel, zinc and palladium, which is mainly used in electronics, have all seen their prices soar this year.

Precious metals have seen price drops as economic sentiment has turned risk-on and away from safe have investments. But prices are still solid after gold gained 25% in 2020 and silver 48%. Analysts also see gold fundamentals as robust despite a tough start to the year and many expect prices to retrace back up as inflation rates continue to move up.

Why is demand for industrial metals and other commodities so high?

Doug King, boss of King’s Merchant Commodity Fund, an American hedge fund established in 2004, doesn’t believe the current strength of the commodities market is a temporary rebound from depressed demand over the pandemic. He is convinced that what we are seeing is a long-term shift in the structure of the global economy.

“We are facing a structural inflation shock. There’s a lot of pent up demand, and everyone wants everything now, right now.”

There’s been a recent drop in the prices of industrial metals, especially copper which has given up all of its gains this year. That’s largely been because of pressure from China, which is worried about the cost of the commodities it needs to feed its factories and infrastructure projects.

The world’s biggest buyer has hit back at what it sees as speculators, threatening them with a crackdown, and has also been releasing strategic stockpiles to increase supplies. It’s worked to an extent but the Bloomberg Commodities Spot Index, a measure of 22 raw material prices, is still up 78% from its March 2020 low, and most analysts expect prices to remain high, probably higher, for some time to come.

Are we in a 5th commodities super cycle?

Economists define a commodities super cycle as a sustained period of high demand that commodities producers like oil companies, farmers and miners struggle to match, pushing prices up in a rally that is longer than the usual economic cycle.

There is debate around whether what we are witnessing now is a fifth super cycle that is founded on a combination of continuing huge demand from China, coupled with a drive by the USA to respond to the rise of a rival super power and a global push to electrify and move away from fossil fuels.

There is a further argument that western consumers, starved of the opportunity to spend on services like hospitality and tourism over the pandemic, have allocated more of their spending to buying goods like electronics that use metals in their manufacture.

Other analysts say what we are seeing now is rather the second stage of the China super cycle that began in the 1990s and was interrupted by the global financial crisis of 2008. But that’s a point of debate for economists. What’s more important for investors is if commodity prices will remain higher than historical averages, turbo charging the revenues and profits of miners and other companies exposed to the sector.

His faith in continuing robust demand is based on the fact that both the USA and China are, for the first time in history, simultaneously investing in large infrastructure projects as a form of economic stimulus designed to underpin the economic recovery from the coronavirus crisis. And he doesn’t think it will be easy for companies to increase supplies enough to ease prices.

Commodities companies are under pressure from investors and governments to wean themselves off fossil fuels and are tapering investment in areas like oil, gas and especially coal. Shareholders are also demanding higher dividends which leaves less money for expanding production.

Mr King and other commodity traders are happy:

“This is the beginning of a proper boom cycle — this isn’t a transitory spike.”

We’ll take a look at some of the mining and commodities companies that investors may want to take a closer look at in our next article – Investment ideas for exposure to the commodities bull market.