With glamourous international events from conferences to trade shows and exhibitions including London Tech Week and the Fort Lauderdale International Boat Show its bread and butter, it’s no surprise lockdown-plagued 2020 proved a tough year for Informa.

The FTSE 100 company is the world’s biggest events company and an enforced year of practically no physical events was always going to hit it harder than most, despite valiant efforts for at least some of the shows to go on, online. But a 2020 loss of £880 million, almost £1 billion, still makes for a painful headline.

The company has announced full-year results for 2020 that show revenues dropped by 42.5% to £1.66 billion. The steep drop was of course down to most of Informa’s events planned for 2020 either being cancelled, postponed or transitioned to pared back online versions. The company made a profit of £538 million in 2019.

However, with its cash reserves bolstered by raising £1 billion from investors through a rights issue last year, Informa told investors there is light at the end of the tunnel. While adding that 2021 will be a “transitional year” back to normality as a “progressive reopening of physical events” unfolds over coming months.

Based in London, Informa organises events around the world, employing 11,000 and valued at £8.4 billion despite its share price losing almost 70% in value between January 17th and April 3rd last year. There was then a recovery of sorts that saw it add 65% between September 2020 and the middle of this month before the past week, which has seen a new 7.75% drop. 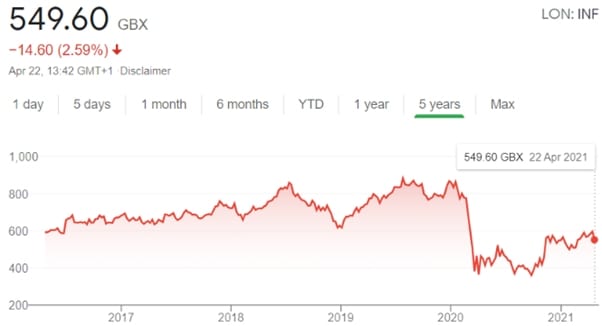 The company employs 11,000 despite layoffs last years, with schemes such as the UK’s furlough payments helping keep redundancies to a minimum. And the events business is now gradually sparking back to life. The UK and Europe may still be largely shut down to at least the extent large public gatherings are not permitted to take place but Informa-run events are now starting to go ahead again in regions like mainland China and parts of the USA.

Mainland China is Informa’s second largest market and 45 “post-Covid” B2B events have now taken place across the country, with six of them matching or improving on the revenue they generated in 2019. Two small boat shows and a fashion event have also taken place in Florida, among the states with the most relaxed current rules, and it is hoped events will recommence from mid-June in California.

“Elsewhere the return of physical B2B events is more phased. We have seen or have now confirmed a return to physical B2B events in Australia, Dubai, Egypt, Japan, Malaysia, Taiwan, Thailand and the UK, amongst others. There remains continued uncertainty over the pace and rate of return in continental Europe, where we generated less than 15 per cent of events revenue in 2019.”

“The strength and performance of Informa’s subscriptions businesses, combined with actions undertaken in 2020 to protect and preserve our brands and customer relationships in B2B events, are delivering continuing stability and security in 2021, in what will be the year of transition.”

Informa’s “base case” forward guidance for 2021 revenues is only slightly better than 2020 at £1.7 billion. Some analysts were disappointed with that, with Citi releasing a note to investors that commented:

“The great hope had been that the company might be able to give concrete guidance that would imply upgrades to full-year forecasts but this, perhaps unsurprisingly, hasn’t happened.”