Investing as interest rates rise – the dos, donts and whys of how to tweak a long-term portfolio

After over a decade at and around historical lows except for a brief period before the onset of the Covid-19 pandemic, interest rates are moving up as central banks attempt to get a grip on inflation that has hit multi-decade highs. While each central bank takes its own decisions on interest rates, the USA’s Federal Reserve often sets a marker that influences international policy elsewhere. And it is now moving decisively. 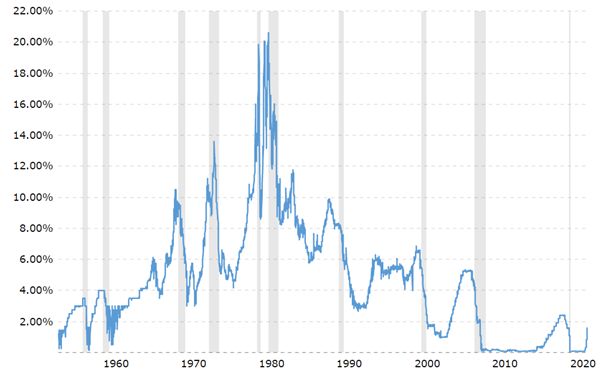 Last month the Fed raised its base interest rate by 0.75%, the first time such a large hike has been implemented since 1994, taking it to 1.5%. While still relatively low historically, the Fed has said it expects rates to reach 3.75% by the end of the first quarter of next year. It will be the first time they’ve been at that level since early 2008 and base rates could potentially move higher if inflation proves stubborn.

In the UK, the Bank of England also raised rates to a 13-year high of 1.25% in June. However, it has been accused of being timid on rate rises with inflation in the country expected to hit 11% in the autumn when the cap on energy bills is next lifted. Some analysts are predicting a new 0.5% rise to 1.75% at the Bank’s next policy meeting in August.

Michael Saunders, one of the more hawkish members of the Bank’s Monetary Policy Committee (MPC), said he did not think that forecasts from financial markets for base rates of 2% or higher next year were “implausible or unlikely”.

How much the Fed, BoE, ECB and other major central banks around the world raise base interest rates beyond Q1 2023 will depend on how quickly or slowly inflation eases off and starts to fall back towards low single figures. Central banks usually have an inflation target of somewhere around 2%.

It’s been almost two decades since investors have experienced an extended period of rising interest rates. As such, you may be wondering how rising interest rates can affect financial markets, especially stocks and bonds. And if there is anything you can do to help protect your investment portfolio from the worst of a difficult environment.

Why are central banks raising base interest rates?

Interest rates are central banks’ main tool when it comes to their options for controlling inflation levels. Lower interest rates make borrowing cheaper, encouraging it and subsequent spending, which drives up demand for goods and services.

Raising interest rates has the inverse effect, making borrowing more expensive. That has the knock-on effect of reducing spending by businesses and consumers, stifling demand. Lower demand typically provokes providers to lower prices in an attempt to encourage it, if margins allow.

Inflation rates started to rise more quickly than at any other point in recent history in 2021, catalysed by the supply chain issues and labour shortages that resulted from the Covid-19 pandemic.

Loose monetary policy designed to ease the economic impact of the pandemic is also a major factor, especially as it came after just a brief period of tightening following years of quantitative easing (money printing) over the years after the 2008 international financial crisis. As did years of mainly record-low interest rates. And the fact consumers whose incomes were not affected by the pandemic saw disposable income boosted by work-from-home rules and tight restrictions on socialising and travel.

Rising inflation intensified this year when Russia invaded its neighbour Ukraine, pushing up energy prices as well as those of many other commodities the two countries are major exporters of, such as wheat, other agricultural commodities and metals.

The monetary policy of central banks can do little to control inflation caused by genuine shortages of raw materials caused by geopolitical instability. That’s one reason why interest rates are not rising even faster but also means there is a strong incentive for central banks to do what they can to try to tame inflation, even if it is at the expense of companies’ profitability.

How can interest rate rises affect stock and bond markets?

Rising interest rates can be a negative for both stock markets and bonds, even if it means the latter offers investors higher returns on the face value of newly issued debt. However, rising interest rates depress the prices of existing bonds paying fixed interest rates established during a lower rate environment. They become much less attractive to investors, depressing demand in secondary markets.

However, bond investors shouldn’t panic. Any high-quality individual bonds you own should continue to pay out the promised interest rate so you can hold them to maturity at no loss and then re-invest in higher interest rate bonds.

An allocation to bonds is also still important for portfolio stability as even high-quality stocks have, says Morningstar’s Christine Benz, “a higher volatility profile than low-quality bonds”. The implication of this, she continues, is:

“A worst-case scenario for stocks will equal much higher losses than you’re apt to see in an Armageddon-type scenario in the bond market.”

However, it does make sense to audit your portfolio’s bond holdings and make sure you are not over exposed to debt from companies with less secure credit profiles. If they have a high debt ratio, they could run into difficulties making payments if their revenues drop during a period of economic pressure or obligations rise significantly as interest rates increase.

If you are invested in bond funds, their principal value may well decline but those losses will be at least partially offset by the fact that the manager can swap into higher-yielding bonds over time. Longer term, rising yields may be a positive for bond investors, just not right away.

Rising interest rates are a bigger problem for equities. Firstly, it makes new borrowing more expensive, which can put companies off investing in debt-funded growth as too risky. Slower revenue growth hits share prices. Rising interest rates also makes it more expensive for companies to service existing debt, which has an impact on profitability, especially if a company is highly leveraged.

A combination of high inflation and rising interest rates generally increases costs for companies. Some companies can pass those higher costs onto consumers. However, that increases costs for consumers, as do higher interest rates if it means mortgage payments and those that service other debts increase. That reduces consumer spending power, which will reduce the revenue of companies selling goods and services that represent discretionary spending.

Should I adjust my investment portfolio to minimise the impact of rising interest rates?

As a general rule, investors should err on the side of caution when it comes to adjusting portfolios based on transient economic and market conditions and this period of rising interest rates and high inflation shouldn’t change that. However, that rule is based on the assumption an investment portfolio is diversified in alignment with a long-term investment horizon and goals.

If you don’t plan to draw down from your investment portfolio for 5-10 years and are generally happy with its asset mix, there’s a strong argument to ignore current conditions and do nothing. However, without going overboard, there’s also a reasonable argument for tweaking a portfolio by increasing allocations to sectors and companies that traditionally benefit from, or are less affected by, rising interest rates. But you should also make sure these are generally strong investments you would consider anyway as part of your long-haul strategy.

If you do want to make some adjustments to boost the resilience of your portfolio for a higher interest rate environment, approaches worth considering include: