Investing for higher inflation: gold, commodities, miners and banks are traditional hedges against rising prices but are there other options?

After a year that strongly favoured risk-on investments as stimulus cash flooded markets and growth companies powered soared on stock markets jitters have returned. Investors are fretting about data coming out of China, the USA, and other major international economies that suggest inflation is on the rise.

The result of inflation data readings for China’s factory output and general consumer inflation in the USA was a sharp drop in stock markets over the second week in May. The Dow Jones, S&P 500 and Nasdaq suffered losses of between 3.4% and 4.8% after the release of the inflation data – which was ahead of analyst expectations in both the USA and China.

A similar pattern unfolded in the UK, where the FTSE 100 suffered a 4.1% drop over the same few days. That could have been worse were it not for the benchmark index’s relatively heavy weighting towards banks, which are beneficiaries of higher inflation rates with interest rate hikes typically the first response to rein price rises in.

Some of those losses have since been recovered but markets are showing a lack of enthusiasm. Despite central banks and governments emphasising they are convinced any quickening of inflation this year will prove temporary as stimulus is wound back, investors are not entirely convinced. 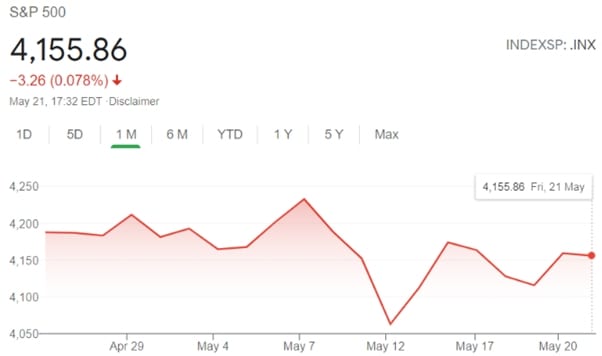 Markets see at least some risk inflation will break free of the parameters central bankers and policymakers envisage. And if that happens it could take some time to bring it back under control.

One outcome of market nerves around inflation risk has been new capital inflows into gold, miners, and commodity funds as investors look for hedges against any sustained period of price rises. Banks have also gained in popularity.

But why does higher inflation hurt growth stocks and favour commodities and lenders? And are there other good options for savers seeking to hedge against inflation?

Why is higher inflation bad for growth stocks?

Higher levels of inflation are notoriously damaging to growth stocks – shares in quickly growing companies. The big tech stocks like Amazon, Apple, Alphabet, Microsoft, Testa et al are examples of the kind of growth companies whose sky-high valuations are largely based on future earnings potential.

Because inflation has more time to erode earnings ten years distant than those expected over the next year or two, concerns over the risk of an extended period of higher prices hit growth stocks hardest. We’ve already seen the effect of the surprisingly high inflation data that came out of China and the USA earlier in March.

Fund manager Baillie Gifford, whose tech-focused growth funds like its flagship Scottish Mortgage Investment Trust have been major beneficiaries over the recent bull run for growth stocks, has seen performance suffer as the market recalibrates for higher inflation risk.

The funds themselves are still popular and haven’t suffered any major outflow of capital. Investors have built up enough trust thanks to years of outperformance not to take flight at a hiccup. Many investors have set up standing orders that see them pay in every month and are committed.

But there are signs investors are starting to bank some of the often significant paper profits made on tech stocks. Scottish Mortgage has, to varying degrees, sold down its stakes in companies like Tesla, Apple, and, to a lesser extent, Amazon over the past year. Others have started to follow a similar strategy more recently.

Retail investors are also reacting. £1 billion was taken out of funds by American retail investors over March as valuations started to look expensive even in the context of the rampaging bull market for growth, particularly tech, stocks in place for most of the last 12 months.

If you are banking profits made on growth stocks where can it be reinvested to protect against higher inflation?

Investors pulling their capital out of growth stocks have been turning towards traditional inflation hedges. Direct gold investments, mainly through ETFs that track the price of the precious metal, have been popular. As have stock in gold and other commodity miners, or funds exposed to a combination of miners and physical commodity prices.

Investment platforms confirm the shift in sentiment. Interactive Investors (II) says that ETFs and ETCs tracking physical commodities like the L&G All Commodities UCITS ETF, including iShares Physical Gold ETC, and WisdomTree Copper ETF have all featured among their most bought funds in May. Of funds invested in stock, the BlackRock World Mining Trust has been attracting buyers and has been the second most popular investment on the II platform in May.

Budget stock trading app Freetrade also reports miners have been the category with the biggest rise in buyer interest this month. The number of investors acquiring shares of miners and commodities traders like Glencore, Rio Tinto and lithium-centric Kodal has doubled.

There has also been a less significant but still apparent uptick in interest in banking stocks. If central banks change their tune and start to get concerned about rising inflation, jacking up interest rates from historical lows would be the most likely and first course of action expected. That benefits lenders and how likely investors think interest rate rises are can be seen in the fact the number of them buying NatWest stock rose by over 50%.

Other options growing in popularity are multi-asset funds invested in US Treasury inflation-protected securities, whose payments rise in line with inflation. Examples include the trusts Personal Assets and Capital Gearing.

Infrastructure funds are another traditional hedge against inflation because contracts for major projects usually include clauses that see payments linked to inflation to cover the risk of higher commodity prices and other rising costs. One option is Gravis Capital Management’s GCP Infra fund, which invests in UK-based physical infrastructure and offers a sustainable-looking 6.5% yield.

Another popular choice is the Legg Mason IF Clearbridge Global Infrastructure Income fund. As the name suggests it invests globally in companies that build infrastructure. Its stated investment target is to outperform the OECD G7 Inflation index by an average of 5.5% over five-year periods.

Investors needn’t panic and sell out of growth stocks completely. A correction over coming months could also be a good buying opportunity and the party line from central banks that they expect a jump in inflation to be short-lived could prove accurate.

But despite the May correction, if inflation worries persist or deepen there is still significant potential downside for growth stocks, which continue to look particularly expensive in a historical context. Allocating some of a portfolio to strong inflation hedges could be a sensible step.