With a landmass of 30.37 million km2 and population of 1.3 billion spread across 54 countries and 2 disputed territories, Africa is the second largest continent in the world. Only Asia is larger, both in terms of territory and human population. Like Asia, Africa’s scale and diversity of cultures, histories, politics and economies makes it difficult to the point of disingenuous to talk about it as a single entity.

But despite that, there is one common thread that runs through the huge variety of African nations from the Old World territories of antiquity that fringe the Mediterranean facing Europe to southern Horn. Unrealised potential. Without even considering entering the maze of geo-political theories as to what has held back political and economic development across Africa, it is hard to argue as many as one of its 50+ nations is anywhere close to representing a success story.

Political instability, weak or failed rule of law, poor human rights records, corruption, war, a lack of education, health care and poor infrastructure all contribute to under-developed economies across this vast continent. Of course, there is a significant disparity in the extent to which these problems manifest themselves in the patchwork of nations across Africa. Some offer their citizens a higher standard of living than others, though most have a huge economic divide that splits society into a small minority of the wealthy and a large majority living around or below the poverty line.

Many are home to unrivalled mineral and other natural wealth that holds the potential to make them among the wealthiest nations in the world. Despite that not a single African nation makes it into the top 60 in the world on the United Nation’s Human Development Index. 19 of the bottom 20 nations on that list of 189 are African nations, split only by Yemen in 178th spot.

If it sounds like a depressing picture of Africa’s social, political and economic development that has been painted it is because it is. It’s hard to present the facts any differently. Of course, Africa is a part of the world with, like every other, a deep and rich history of civilisation and culture. The relative lack of written history across much of the continent means just how advanced its ancient and even more recent civilisations were is often underestimated and is just now being uncovered and explored by historians. But that Africa’s recent history has not been one of social, political and economic development and prosperity, even accounting for fluid interpretations of what those concepts mean, is hard to deny.

But in that adversity comes opportunity. Present day Africa represents, arguably more than any broad geographical region of the world, the opportunity for unparalleled economic growth. The bottlenecks that have, and to a large extent still are, preventing that are well-known and have already been mentioned. But there is also plenty of evidence to suggest that things are, if in a non-lineal and fractured way, beginning to change.

Much, if not most, of Africa’s troubles can be put down to war and corruption. And much of the conflict that has torn African nations apart time and again can again be traced back to corruption. The vast natural wealth enjoyed by many African nations has ironically been what has held back their development. Corrupt power factions jostling for personal control of that wealth has prevented it from building the educated, middle-class economies it should have.

The age of the internet is criticised in developed, Western economies for diluting the quality and veracity of information and education. But the reality is despite concerns around ‘fake news’ and social media being manipulated to influence opinions, the internet has democratised access to information. And to a large extent education. And if there is one thing that has the power to shake the people of the continent of Africa into demanding the kind of better, fairer government that will drive economic growth, it is access to information and education.

The digital world is now making inroads into Africa and, crucially, not just in the biggest cities. The impact of that should not be underestimated. The expansion of coverage that is and will continue to develop will hopefully mean all or at least most of Africa is connected within a decade.

Initiatives such as Google’s Project Loon and Vision Fund-capitalised OneWeb should ensure that. Loon is creating a network of solar-powered stratospheric balloons, bringing internet connectivity to rural and remote locations all over the world and OneWeb a network of small, cheap and closer-to-earth satellites.

That connectivity should allow development catalysts such micro financial services, access to information and, crucially, education to sweep across Africa. 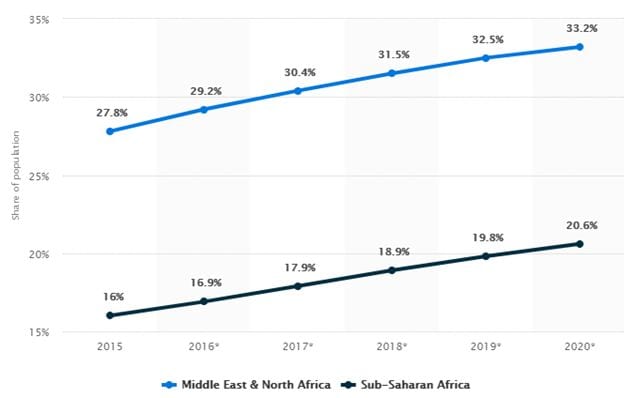 Africa currently has the lowest rates of internet penetrations in the world. But access is quickly gaining traction. The digital economy is particularly suited to the African reality, where poor infrastructure and the shifting sands of war-torn regions makes traditional logistics and physical economy trade difficult. Its potential to turbo-boost the continent’s economies is huge. There is also hope that internet access will lead to a more mature political culture and civil society across Africa. This would help to temper some of the extremities of corruption, allowing a more significant share of the natural and mineral wealth of African nations to feed back into local economies instead of only into the pockets and offshore bank accounts of local ‘strong men’.

Urbanisation And The Rise of an African Middle Class

The rise of a middle class in many African nations is directly linked to urbanisation and gradually improving infrastructure. Urban populations are expanding by an average of 1.1% annually. PwC research indicates that infrastructure spending in sub-Saharan Africa will exceed $180bn by 2025.The company draws the conclusion:

“The shortfall in government funding creates opportunities for private investors to get involved either through direct investment or public-private partnerships”.

A growing middle class is expected to fuel the rise of savings, pensions and insurance products. At least some of that capital would be expected to find its way into locally-listed public companies. Standard Bank forecasts an additional 7.6 million Nigerian households that will be defined as ‘middle class’ by 2030. In Ghana that is expected to be 1.6 million. Across the continent, the number of households graduating to a middle class standard of living would be expected to number in the tens of millions, if not hundreds. This will increase the demand for savings and investment products and other financial services, boosting Africa’s capital markets.

How Can Investors Capitalise in an African Growth Story?

When it comes to capital markets, Africa is just about as ‘frontier’ as frontier markets get. There are around 20 stock exchanges of note spread across the country and another smattering of minor exchanges with few listed companies and trading volumes of little note. The Johannesburg Stock Exchange is by far the biggest by market capitalisation and hosts companies from across Africa and not only South Africa.

It would be very adventurous, not to mention risky, for investors from the UK or other developed economies to try and stock pick individual African companies or other assets to invest in. Trying to understand the complexities and factors involved in the risks and opportunities of publically listed African companies would be a challenge too far for all but real specialists in Africa’s capital markets.

But there are managed Africa-focused funds, ETFs and index trackers that do offer investors direct investment exposure to the economic growth prospects of Africa. A 2018 Morningstar article lists the researcher’s 5 ‘top performing Middle East and Africa Funds’ as:

ETFs to Invest in Africa

It’s impossible not to see Africa’s capital markets as a risky investment. While the continent’s economies and capital markets are sure to develop hugely over the coming years and decades it is hard to predict how quickly change will take place and when and where disruption to the development might come about.

But it’s also impossible not to see huge economic development potential in Africa. And that means huge opportunities for investors with a long term horizon and an appetite for risk.

The Nasdaq dropped 1.9%, while the yield on 10-year Treasury notes dropped to 1.557%... END_OF_DOCUMENT_TOKEN_TO_BE_REPLACED

The dollar’s received a further boost as the Nasdaq dropped more than 2%, the... END_OF_DOCUMENT_TOKEN_TO_BE_REPLACED