Investing In India Capital Markets: Is Sub-Continent The Next Big Growth Story?

Is India the next big economic growth story? Many economic analysts believe so. For three decades now, China has been the growth engine of emerging markets. That growth is now inevitably decelerating. Whether it will prove a soft or hard landing is an open question but the years of consistently strong double digit economic growth are coming to a close. India, another huge country, the second largest in the world with a population of 1.37 billion to China’s 1.42, undoubtedly holds huge potential as a global economy.

Capital Economics analysts expect India’s GDP growth to be more than double that of China’s between 2023 and 2027. In fact, it is expected to be considerably higher over the next two to four decades. Does it follow that the country’s capital markets will also be among the fastest growing in the world over the next few decades?
Is now is the time for those investing online with an appetite for international and emerging markets exposure to start considering Indian equities? Let’s take a look.

Since coming to power in 2014, Modi’s government have introduced several major reforms such as the news Goods and Services Tax (GST) and demonitisation.

The latter rendered the country’s two largest banknotes, of 500 and 1000 rupees, worthless outside of a bank in which they can be exchanged. 86% of India’s paper currency was rendered obsolete overnight. The concept behind demonitisation was a crack down on India’s ‘black economy millionaires. The result was chaos. 99.3% of the notes came back into the banking system, demonstrating that illicit wealth that does exist is not held in cash. The move did, however, hit the real economy, which suffered significantly in the chaotic adjustment. Detailed by the Observer Research Foundation:

“It hit real estate, slowed growth due to reduced demand, disrupted supply chains, and increased uncertainty. Additionally, it caused a decline in cash-sensitive stock market sectoral indices like realty, fast-moving consumer goods and automobiles, and hurt the informal, cash-driven economy. Hardship aside, demonetisation has forced unaccounted-for money to flow into the banking sector, which can and is being tracked”.

It’s hard to read the policy’s reasoning and implementation as anything other than deeply flawed. Modi’s refusal to acknowledge the policy as a mistake is also not doing him many favours. Other major policy reforms have centred around better regulation and management of the real estate market, speeding up the resolution of commercial disputes and a new code for corporate bankruptcy and insolvency.

It is fair to say that the reforms have not had the impact hoped. Since Modi came to power, India has seen annual GDP growth of an average at around 7%. Despite being elected on a pro-business and pro-growth ticket, for an economy of India’s size, stage of development and potential, that can be considered no more than baseline. 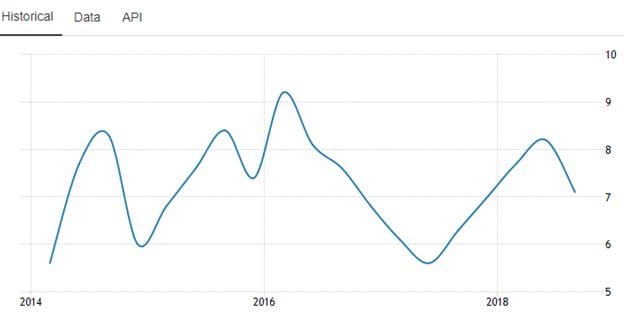 However, there is some hope that the reforms have laid a foundation for India’s economy over the next decade. Even if Modi fails in his bid for re-election this year, the extent of his policy reforms will mean another government would be, at least to an extent, forced to follow a similar economic path. An unwinding of changes is thought unlikely.

Barring complete mismanagement, India’s economic growth should remain among the highest in the world for a big, high population country. If Modi’s reforms-to-date do finally bear out and future progress is made, either by him during a second term or a successor government, an upturn could be expected. The positive scenario is very positive and ‘baseline’ projections would, in a global context, also not be a disaster for investors in the future of India’s economy.

Despite the turbulence that has resulted from Modi’s swinging economic and business policy changes, India’s capital markets have been in rude health. India’s benchmark index, the S&P BSE Sensex has risen steadily over the past few years. Last year it almost seemed to defy gravity at some moments by maintaining a positive trajectory despite domestic economic upheaval, a general ‘risk off’ outflow of capital from emerging markets and a significant international stock markets correction. Foreign investors have been pulling money out of India but that has been compensated for by strong domestic demand. There is a strong trend towards Indians moving capital into the stock market and out of gold and real estate, Indians’ traditional stores of value.

Any investment in India’s capital markets should take a long term outlook with at least a 5-10 year horizon. It can be argued that is the case for any stock market investment but is especially the case for a more volatile emerging market such as India.

UK-based investors who want to gain more direct exposure to India’s capital markets than is afforded through a broad-based emerging markets fund have a number of options. There are several actively managed funds that focus on India, such as the Jupiter India Fund. Benchmark-tracking ETFs such as the FTSE India index are also an option. 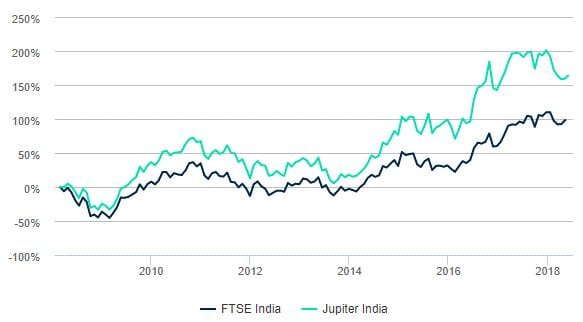 Political uncertainty has always been probably the main factor discouraging international investors from the country’s capital markets. That hasn’t really changed and in the short term this year’s elections, which see Prime Minister Modi bidding for a second term in office, there is heightened uncertainty. But the fundamental problem goes far beyond the short term impact of a single election season. India has veered between governments for a long time now, with policy directions coming out of New Delhi regularly taking sharp new turns, making it difficult for the country’s corporations to plan with any certainty.

That India’s economy will see strong growth over the next few decades is in little doubt. It’s coming from such a low base that’s almost guaranteed. But a more mature and stable political environment could well prove the difference between growth and runaway growth. It will also have a huge impact on capital markets with internal investment and foreign direct investment both hampered by the lack of a stable political direction. Required improvements in corporate governance are also linked to the political situation.

Modi’s 2014 election as prime minister came with great expectations for the economy. It was the ticket he was elected on and he had a strong track record as Chief Minister of the state of Gujarat between 2001 and 2014. However, he has disappointed in his attempts to replicate his success there as prime minister. He’s clashed with the central bank, leading to the resignation of its governor Urjit Patel and a drop in the rupee.

The dispute was founded on Modi pushing the central bank to relax its position towards state-owned banks with bad debts. The suspicion is that position was political as elections loom this year. The Reserve Bank of India wants to limit the loans being extended to businesses because their balance sheets are precariously weighed down by bad loans. Modi wants them to lend to spur the economy.

Modi’s government also seems to have failed to capitalise on the U.S.-China trade war. While foreign direct investment has flowed into other Asian economies such as the Philippines and Vietnam as China-alternatives in the supply chain are sought, India seems to be missing out. Complex employment laws and lack of land designated for commercial development mean India is not developing into the kind of manufacturing hub that might be expected of a country with a huge population, low wages and traditionally close ties with the West.

He’s also had successes. Infrastructure projects, particularly road building, have gone well. He’s trying hard to push the same kind of digital overhaul of bureaucracy that is one of his finest legacies in Gujarat.
The digital economy is one that offers a huge opportunity for India.

Most Scenarios Are Positive For Investing In India’s Capital Markets

The conclusion for investors considering India’s capital markets is that the future is cloudy. It’s difficult to anticipate the pace at which political, administrative and economic reform will take place. However, barring worst case scenarios, it is hard to not believe there will be progress. Even if that falls further towards the negative end of the scale of possibilities it would be expected to be enough to see the country and its capital markets move in the right direction over a longer term horizon.

Choosing individual Indian companies to invest in is probably too risky a business for all but the most experienced of emerging market investors. But a broad-based fund that is focused on India, or an index tracker, would be expected to spread risk enough and reflect the general direction of the economy.

“India invariably disappoints both the optimists and the pessimists”

The quote above probably sums up the attitude investors should take when considering investing in the future of India’s capital markets. It’s unlikely to be a calm ride but the sheer scale of the country and its long term economic development trajectory mean that it is an investment exposure to which merits serious consideration.

Which? calls on FCA to extend repayment holidays

Big GB firms may be deterred from trading...

Workers on furlough were three times more likely to have defaulted in the last... END_OF_DOCUMENT_TOKEN_TO_BE_REPLACED