Facebook investors have done very well over the years since the social media giant went public in 2012. Its share price has gained almost 859% since then at an average return of roughly 95% a year. Facebook shareholders have also seen gains of 40% over the past 12 months.

The Facebook share price has, since 2012, only suffered two significant corrections, in late 2018 and March 2020. Neither of those valuation drops was a reflection of investors losing confidence in Facebook itself but rather wider market trends. In 2018 the tech sector as a whole suffered a correction as investors became nervous a near-10-year equities bull market may be drawing to a close. That sparked concern tech valuations looked stretched after years of strong gains. 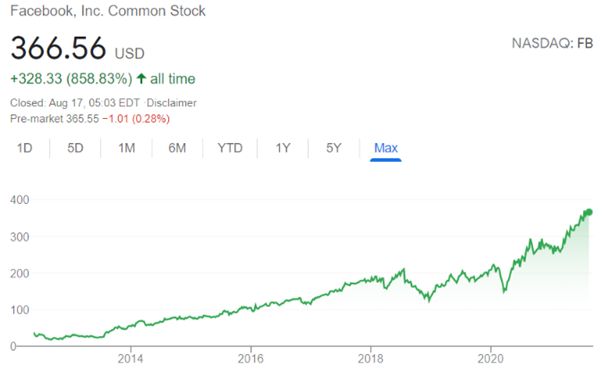 The 2020 correction was part of the general stock market crash that greeted the onset of the coronavirus crisis. It was also followed by a period of spectacular gains, especially for companies, like Facebook, with online business models. The share price gained over 80% between its March bottom and the end of the year.

But with regulatory pressure ramping up on Facebook there has to be significant doubt around just how much bigger the market leading social media company can practically get. Even if competition regulators led by the new FTC chair Lina Khan fail in their government-backed mandate to clip the wings, and preferably break up, the biggest tech companies, Facebook will find making any further acquisitions in the social media sector difficult to impossible to pull off.

Further growth in the social media market will almost certainly have to be organic. With Facebook, Instagram and WhatsApp, the company’s three social media platforms, all now considered relatively mature, that may prove tricky. And stalling growth rates will hit the company’s valuation.

The company has other plans for the future that it hopes will deliver a new era of growth. Augmented and virtual reality and the ‘metaverse’ next generation internet platform Facebook believes is coming is very much a focus.

But it will take at least several years, if not more, before Facebook has a new, immersive digital platform to drive new growth from. And the internet may not, in fact, evolve in the way founder Mark Zukerberg and the Facebook management team expect. Or, if it does, that Facebook will succeed in its ambition to be a ‘founding father’ of the metaverse ecosystem.

While further growth can’t be written off, President Biden and his attack dog Lina Khan may find their trust-busting ambitions thwarted by courts and interests in Congress, the prospect does look vulnerable.

Should Facebook be worried about growing competition for digital marketing revenues from smaller social media companies?

And there’s a new generation of social media companies, spearheaded by Bytedance-owned TikTok, which has replaced Facebook and Facebook Messenger as the most downloaded app in the world. A phalanx of mid-sized and more niche social media companies are also succeeding in growing their revenues through digital marketing served via their platforms.

Most popular social networks worldwide as of July 2021, ranked by number of active users(in millions) 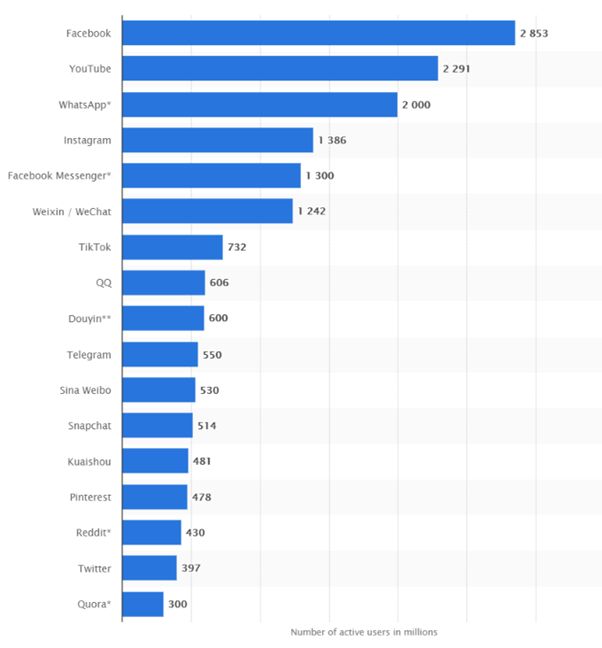 Facebook’s revenues have seen strong growth over the quarter to the end of June as businesses newly freed from lockdown restrictions returned to advertising. Revenues for the quarter were up an impressive 56% compared to the same period a year earlier.

But smaller publicly-listed social media rivals Twitter (74%), Snap (116%), and Pinterest (125%) all saw much higher growth. That’s partly because Facebook’s revenues suffered less than those of smaller social media platforms. Sellers of goods and digital products, which rose in popularity with consumers over the platform, upped their digital marketing spend, which went some way to compensating for reductions from other advertisers.

But the discrepancy of growth rates was also a sign of advertisers looking to spread their nets, and risk, by allocating more of their budget to alternative digital marketing platforms like mid-sized social media.

Sir Martin Sorrell, the veteran marketer who is the founder of the S4 Capital network of digital agencies and previously built the WPP Group, the world’s biggest advertising and PR company, has more insight into the sector than most. He says advertisers are increasingly inclined to spend more outside of ‘the Big 6’ digital platforms of Google, Amazon, Facebook, Tencent, Alibaba and Bytedance’s apps. He reasons:

“If you are an advertiser, you want as much choice as possible. Faced with six dominant platforms, you’d want more competition.”

That is motivating a disproportionate increase in the marketing budget being spent with alternatives to the dominant platforms in the West and China.

Facebook’s most dangerous new rival to social media user and adspend dominance is TikTok owner Bytedance. In 2020, TikTok usurped Facebook’s apps as the most downloaded globally. The short video clips-based social media app has 1.9 billion active users and has been installed on 3 billion mobile devices. Only three other non-gaming apps have reached those kinds of numbers and they are all owned by Facebook.

Bytedance, which owns other apps including China’s most popular news aggregation app, comparable to Google News, now generates $34 billion in revenue a year, mainly from digital advertising. That’s still dwarfed by the nearly $86 billion Facebook brought in last year but TikTok is still in its fast growth phase and also hasn’t had as much time as its U.S. rival to develop its advertising platform. 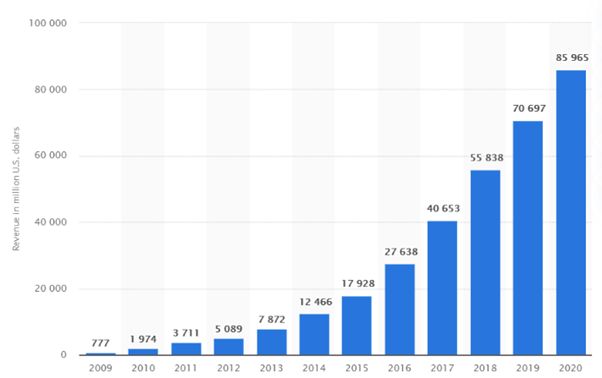 Crucially, TikTok has captured a demographic, teens and those in their early twenties, that tends to see Facebook as the social media of their parents or ‘old people’ more generally. It’s also the demographic advertisers see as the hardest to target, making TikTok especially attractive as a new arena in which to spend digital marketing budget and where it already has an edge of Facebook.

Investors cant currently gain direct exposure to Bytedance as it is still a private company. However, that is expected to change in the near future with the company reportedly planning a fourth quarter IPO that will see it list in Hong Kong. An IPO valuation of around $200 billion is believed to be Bytedance’s target, which would make it one of the most valuable flotations in history.

Another social media platform gearing up for a stock market listing is the discussion forums platform Reddit. The platform’s forums, or subreddits, are popular for special interest groups on anything from stock market trading to stamp collecting.

Reddit has been around for a while, first launching in 2005, having been incubated by Y Combinator. Other alumni of the Silicon Valley accelerator include Dropbox, Airbnb, Stripe, Twitch and Doordash.

It’s taken some time for Reddit to work out an effective monetisation model and reach the necessary scale but quarterly revenues surpassed $100 million for the first time this year. It also raised $400 million in funding this month, with Fidelity participating in the round, at a valuation of over $10 billion.

The cash raised will be invested in further development of the platform’s advertising engine and a 2021 IPO is reportedly being considered. One for investors keen on social media exposure to keep an eye on.

Two already listed social media companies that investors can buy shares in now have been upping their game lately when it comes to generating improved revenues from digital marketing. Snapchat owner Snap saw year-on-year revenue growth for the three months to the end of June grow 116% to $982 million.

The company is investing heavily into augmented reality, including the recent $500 million acquisition of UK-based WaveOptics, which makes optical systems for augmented reality headsets. Around 200 million people a day engage with Snapchat’s existing augmented reality features and functionalities and the company should be well-positioned for growth as the AR/VR market matures. 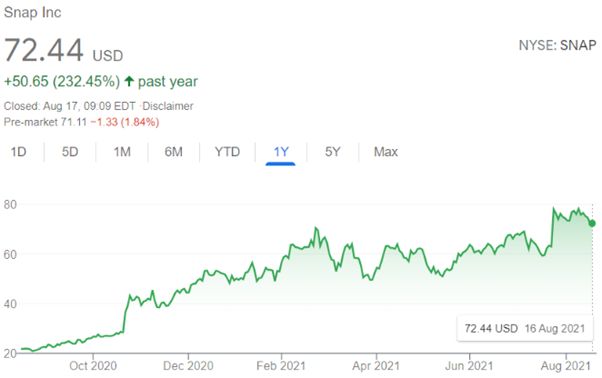 Snap’s value has more than doubled over the past 12 months but with rapid triple digit revenue growth starting from a low base, there should be more to come.

Twitter has historically underperformed when it comes to generating ad revenues but there is some evidence the micro blogging platform may finally be getting its act together. It has further refined and developed its automated ad sales platform to both improve targeting and usability for marketers running campaigns. An ‘buy’ button on e-commerce adverts is also being introduced which should boost ad revenues.

Twitter’s income was up 74% year-on-year over the quarter to the end of June. Having lagged behind its social media competitors in revenue generation for years, there should be a lot more space to continue growing those sales figures. The Twitter share price is up almost 68% over the past 12 months and has seen gains of 17% since the beginning of 2021.

Pinterest, the photo sharing social media app, had a bad July with its share price which lost over a quarter of its value in July after investors were disappointed by the company’s second quarter performance. Its valuation is down a little over 17% for the year but could that represent a buying opportunity?

Active users dropped 7% year-on-year, which caused investors to panic. However, the company actually beat analysts’ forecasts for second quarter revenue, which came in at $613 million when $562 million had been expected.

Pinterest is also making progress on adding revenue-generating e-commerce functionalities like the new“Shopping List” feature that will allow users to save Product Pins in one place and will let them know if prices are reduced. Shoppers will also be able to search for products by brand and price. Shopify’s Verified Merchant Program was also expanded to multiple new regions internationally.

Falling active users numbers are a concern but Pinterest is also stepping up its revenue generation game and if it can reignite user growth, which is a risk, its share price would be expected to recover strongly from its July drop.