Investors Are Betting On Sobriety As Drinking Trends Shift

One of the most crucial pillars of a solid long-term investment strategy is to be aware of trends that might change a sector’s business model or demand for the goods and services currently popular. Over the long term, it’s the companies, and investors, that are able to spot these important terms that are successful. Kodak was the biggest company in the photography and film sector in the world. But it was slow to spot the trend towards digital photography that would completely change dynamics of its market.

Kodak had the brand and financial clout to pivot and become a dominant force in the new digital photography market. But didn’t and died. Just a few years ago Microsoft was losing ground to the new tech giants such as Alphabet, Amazon and Apple.

But the company adapted by changing its core Windows and Office products into SaaS formats providing repeat income through subscriptions. And it anticipated the rise of Cloud computing and quickly invested in becoming, along with Amazon, one of the two market leaders in a hugely valuable and rapidly growing new market. Not only did Microsoft’s shift in strategy capitalise on trends that meant it was not overtaken by younger tech giants but it also led to huge revenue growth compared to what it ever made before. Microsoft is again the most valuable company in the world. 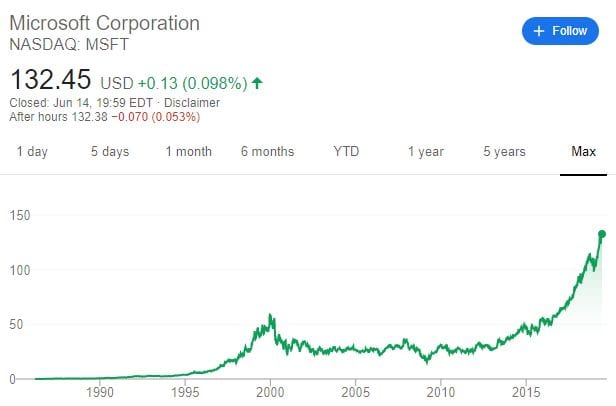 These two very different trajectories of Kodak and Microsoft show how important it is for companies, even the biggest in the world, to adjust towards a changing business landscape. Sometimes huge market shifts are the result of technological advances. Other times it can be the result of a change in culture, education and tastes.

Would a fashion retailer unable to embrace and reflect constantly evolving fashion trends and consumer habits be successful? The bloodbath on the UK high street offers an answer. Then look at Next. A high street fixture for over 3 decades now but one that has got it right both in terms of the trends in the fashion it offers as well as embracing and making a success of the ecommerce trend. Next is going strong while most of its traditional rivals, most of whom half-heartedly invested in their online presence too late and without enough priority are struggling to survive. Or have already passed into the annals of history.

For investors, spotting major trends and periodically adjusting an investment portfolio to reflect them is just as important to long term success. New companies driving a trend will rise to prominence. And for established companies in the same market, those that adapt to new trends will stay strong or grow stronger. Those that don’t will be overtaken and may even eventually fail. As such, it’s crucial for investors to keep their finger on the pulse of these market shifts and invest in the companies doing the same.

The trend we’re going to focus on here is the growing market for low and non-alcoholic ‘adult’ beverages.

Historically, this has been a relatively tiny market. People either drank alcohol, be it beer, wine, spirits or cocktails or ‘soft drinks’ like Coca Cola, Fanta or Sprite. Sugar or sweetener-laden drinks most popular with children and teenagers. The only other non-alcoholic options in most cafés, restaurants, bars or even shops has tended to be water, teas or coffee.

Alcohol Consumption Is Dropping To Record Lows Across Demographics

But that is changing. The adult demographic is drinking less alcohol than at any other time in recent history.

That’s largely the result of greater awareness of the health benefits of reducing or even eliminating alcohol consumption. According to market research company Nielsen, about half of adults in the U.S. say they are trying to drink less. That rises to two thirds of adults in the 21 to 34 ‘millennial’ demographic who research data suggest are increasingly listening to warnings around the health impact of consuming too much alcohol, not least among which are the increased risks of cancer and cognitive decline diseases such as dementia.

Health appears to be the number one consideration for those reducing or planning on reducing their alcohol intake. The Nielsen study showed that 40% of the regular beer drinkers cutting back were doing so because they were “opting for a healthier lifestyle”. Another 17% claimed their decision was based on “health-related reasons.”

Federal data in the USA matches ONS statistics in the UK in showing teen drinking has dropped to record-low levels. Dr. Nora Volkow, director of the USA’s National Institute on Drug Abuse is quoted in Time magazine as saying:

“that likely means alcohol consumption will be lower in the future, since most heavy drinkers start when they’re young”.

In certain parts of the world the trend is also being influenced by alternatives such as the legalisation of recreational marijuana. A recent poll conducted by millennial-focused polling group Tylt found that 90% of millennials ‘consider marijuana to be safer than alcohol’. As well as over consumption leading to less anti-social, risky or embarrassing behaviour at the time compared to alcohol, they also like the fact over-indulgence in cannabis doesn’t lead to a killer hangover the next day.

It’s no coincidence that the biggest investment made so far in the legal cannabis market has been Constellation Brands’, the conglomerate that owns popular beer brand Corona and whose core business is beer, wine and spirits, $4 billion investment Canopy Growth, the market leading marijuana producer. Constellation now has effective control of the company and while the decision was initially received with mixed opinions, analysts are now increasingly viewing it as a master stroke.

“designed to light up the same parts of the brain that make drinking alcohol fun, relaxing and sociable—in theory without causing hangovers, loss of control or health issues such as addiction and chronic disease”.

Alcarelle is still some years away from bringing synthetic alcohol beverages to market and safety testing still hasn’t been conducted. But the company’s R&D is said to show hugely promising potential. David Orren, the company’s managing director, has commented:

“This is potentially a tectonic plate. We think that over time, the whole landscape for recreational drinking will change. We’ll have choices, and people will be able to make more intelligent and more informed choices.”

Outside of the quest to replace the intoxicating effects of alcohol with alternatives that either are or are perceived to be healthier such as legal cannabis or synthetic alcohol, the other major growth area in the trend away from traditional drinking is low and non-alcoholic ‘adult’ drinks.

The U.S. market for such beverages, which are designed to appeal to sophisticated, grown-up palates and are not ‘sugar laden’ is tipped to grow by 39% by 2022 by IWSR, the beverage-market research company. There is a similar trend in the UK, albeit the U.S. market is a couple of years ahead.

Distil Ventures, the investment arm of drinks giant Diageo, says that around 25% of the start-ups it currently invests in produce alcohol-free drinks and mixers. One prominent example is UK start-up Seedlip, a non-alcoholic mixer used in cocktails as a replacement for spirits or liquors.

Anheuser-Busch InBev (AB InBev), one of the giants of the alcohol world, has recently invested in everything from fruit juice to probiotic drinks, and has committed to making 20% of its beer volume no- or low-alcohol by 2025. And it’s not the only traditional booze giant shifting its investment strategy in that direction. In 2018 Molson Coors saw its sales drop 2%. Its reaction was to acquire the company behind fermented drink ‘kombucha’, which is proving hugely popular in the ‘wellness’ market.

Many of the biggest beer brands have recently released alcohol-free versions, with Heineken and Budweiser among the most prominent. They are also, for the first time, putting significant marketing budget and efforts behind these releases, indicating a change in how important their role in the overall mix is viewed. Craft breweries are also starting to invest in experimentation with and issue low-alcohol beers in the 2.5% to 4% alcohol range.

Even major spirits brand owners and smaller producers are now issuing lower alcohol alternatives. Keel vodka, which claims to be ‘the world’s first premium light vodka’ and has a 23.8% alcohol volume compared to the traditional 40%, is one example. Until recently, variations in traditional alcohol volume coefficients, especially with regard to spirits, were almost always to the upside.

Investing In the Lower Alcohol Trend

The trend towards lower and no alcohol beverages as well as ‘healthier’ alternatives to alcohol is already strong enough that every big alcohol producer, and many of the medium-sized and smaller ones, will make some concessions by investing in it. For investors the question will be which are doing it best. Every major fashion retailer has an online offering. Most didn’t put enough into them while Next is one example who did. And is now reaping the rewards. The same will be true in the adult beverages space.

Whether investing in stock market-listed companies or private investments in promising start-ups which some high earning, adventurous investors do, recognising the trend is just the first step. The second is correctly identifying which companies will capitalise on it most and which will suffer. There will almost certainly be a Kodak and Debenhams in the alcoholic beverages market as well as several who pivot and turn the changing market trend to their advantage like a Microsoft or Next.