Ocado, the British online groceries retailer-turned-automated-warehouse-technology company, yesterday saw its share price rise by over 3% despite revealing a record loss for 2019. The company’s pre-tax losses piled up to £214.5 million in the year to December 1 from £44.4 million the year before. But with a confirmed pipeline of income from major warehouse partnerships secured, investors are clearly confident about Ocado’s future, sending the share price higher.

Losses were driven by a £111.8 million write-down booked on the value of a Ocado’s Andover warehouse, which burnt down during February last year. So far the company has retrieved £74 million from its insurers. However, only £24 million of that was received early enough to be included in the full year accounting period that ended December 1st. 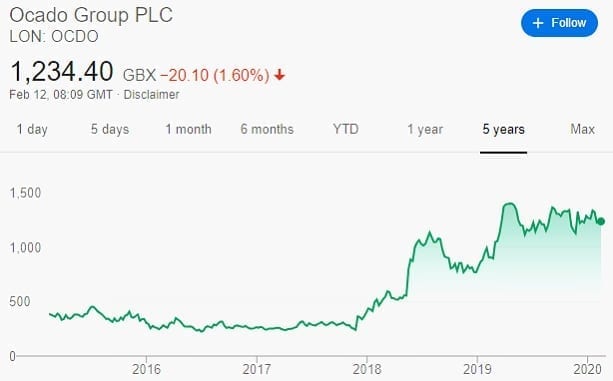 Ocado’s valuation has soared to over £8 billion over the past two years as the company has evolved into a warehouse fulfilment centre automation technology company from an online groceries retailer. By September, when Ocado’s new online retail partnership with M&S replaces its existing arrangement with Waitrose, the company’s retail business will have been separated out from its technology arm. The joint venture with M&S is worth £750 million.

Despite the disruption caused by the Andover warehouse fire, Ocado’s retail turnover showed growth of 10.3% to £1.6 billion. However, it is the pipeline of fees from the international partners that Ocado has signed agreements with to build and operate automated warehouses that license its proprietary technology that is driving the company’s valuation in the eyes of investors. But it is a capital intensive path to returns. Accounting rules mean that income Ocado makes from its partners cannot be booked until the warehouses are ready, but it must carry the cost of fitting them out, causing a drag on its earnings.

£81.4 million in fees were booked from international partners last year – an improvement of 38% on 2017. But it is this year when that income will really start to flow with the first robo-automated warehouses built for partners due for completion by the middle of 2020.

“Since the Kroger deal announcement, the market has decided that no visibility around the sequencing of revenues, earnings or capital expenditure, never mind returns, is fine and the group’s eventual financial delivery is something that one can take on trust.”

One aspect of the annual report that has caused a level of controversy is an £88 million pay-out to Ocado’s five top executives, approved by the board despite the record paper loss booked for 2019.

The rise in the company’s share price over the past couple of years mean its management team will receive the maximum possible level agreed in a five-year incentive scheme set up in 2014. CEO and co-founder Tim Steiner will be paid £58.7 million for the year to December 1, representing one of the most lucrative packages earned by FTSE 100 chief executives in 2019.

Will Bond Funds Be The Next Liquidity Crisis?

The ECB kept interest rates steady but committed to contain the fallout from a... END_OF_DOCUMENT_TOKEN_TO_BE_REPLACED