A majority of Initial Public Offerings (IPOs) are not accessible to retail investors. The companies running them typically prefer to avoid the logistics involved in selling shares to thousands of small investors, instead placing them with institutional investors ordering quotas worth millions.

And while the reasoning of companies going public is understandable – an IPO is a huge amount of work at the best of times – it does mean rank-and-file retail investors lose out.

Recent reports suggest the UK’s retail-facing investment platforms are putting the Treasury under pressure to take steps to address that. Earlier this month the heads of Hargreaves Lansdown, AJ Bell and Interactive Investor, Britain’s three biggest trading platforms, John Glen, the City minister, calling on him to intervene to address the disbalance. He is being asked to consider imposing a regulatory obligation on companies to consider a retail offer in new flotations and to open a wider consultation on the matter.

Not everyone is convinced IPOs represent a good investment. But the argument is that retail investors should be at least given a choice and not locked out to the benefit of institutional investors.

Investing in IPOs – is it a good idea as a retail investor?

If investing in IPOs is a wise move has long been a source of heated debate. Many investors, famously including Berkshire Hathaway boss Warren Buffet, are wary. Berkshire Hathaway, one of the most valuable companies in the world, had never invested in an initial public offering in 54-years before making a profitable exception last year by buying into the IPO of cybersecurity company Snowflake.

In 2019, Buffet explained his position on IPOs to U.S. media CNBC with:

“The idea of saying the best place in the world I could put my money is something where all the selling incentives are there, commissions are higher, the animal spirits are rising, that that’s going to better than 1,000 other things I could buy where there is no similar enthusiasm … just doesn’t make any sense.”

But what is clear is that the past several months have seen a flurry of hugely successful IPOs, particularly those involving high growth technology companies. Takeaways delivery app company DoorDash and crowd-sourced short-term accommodation lets platform Airbnb are two of the most prominent.

In the UK, The Hut Group ecommerce group’s valuation soared between its IPO and public debut in September and has continued to gain since. But retail investors were locked out of the IPO. More recently, the Dr Martens and Moonpig IPOs also saw institutional investors secure a premium on the price they paid at issue and the value the companies’ shares debuted at on the LSE. 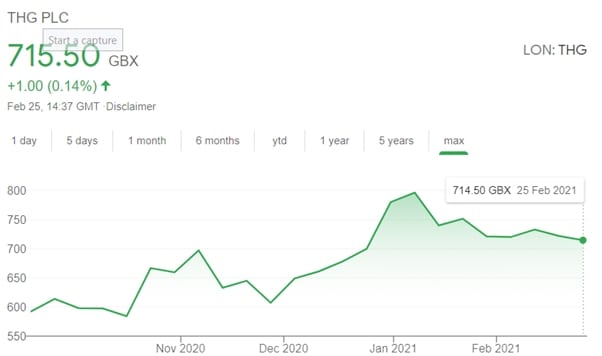 Airbnb’s early success as a public company comes despite the fact its operations have been largely curtailed since March last year due to lockdown restrictions. Having priced shares at $68 in an IPO that valued it at $47 billion and raised $3.5 billion. 2 and a half months later and the Airbnb share price has risen to over $200 for a market capitalisation of $120.35 billion. 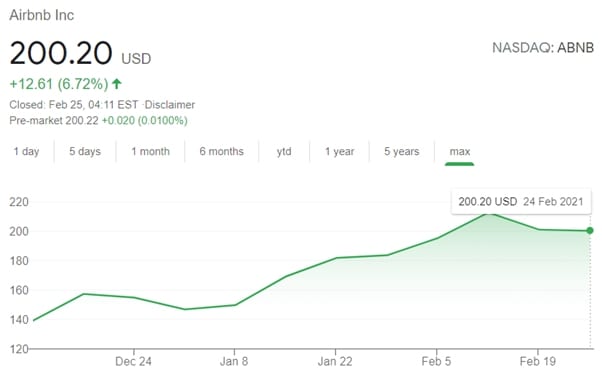 Investors who bought in at the IPO price have undoubtedly done very well indeed. Unfortunately, only institutional investors were given the opportunity to buy Airbnb stock at the IPO price of $68. By the time Airbnb was trading publicly and its shares accessible to retail investors, it was already up 114% to $146.

Having now risen above $200, retail investors who bought into Airbnb’s stock at or around the $114 level it opened on the Nasdaq post-IPO have still banked impressive paper profits. But they took on significant risk in doing so. It’s fair to say the extent of Airbnb’s gains since early December are an exception to the rule rather than standard for post-IPO performance.

Stats that paint a picture of the risk involved in backing IPOs include:

For investors buying into recently IPO-d companies on the secondary market after public trading has already commenced, the success rate is far worse.

But it’s undeniable 2020’s tech IPOs were generally a roaring success for investors, with Snowflake, Palantir, DoorDash and Airbnb among those that saw their valuations soar. There were several more.

Can retail investors expect regulatory changes giving them the opportunity to invest in more IPOs?

The letter written by Hargreaves Lansdown, AJ Bell and Interactive Investor to champion the cause of retail investors argued:

“As it stands, retail shareholder rights are almost completely ignored when it comes to the vast majority of IPOs, which largely take place between City institutions behind closed doors.”

Investment banks, they say, actively discourage companies from including retail investor offerings in their IPOs because it is more work for them. They generally only take a different approach when concerned institutional investor demand might be weak. Meaning retail investors are invited to the party only when it’s not expected to be a good one.

Over the three years to 2020, the LSE and AIM exchanges hosted 352 flotations. Retail investors will only invited to participate in the IPOs of 7%. The platform bosses insist:

“That needs to change. Retail investors should have as much right as any institution to invest at IPO, rather than having to ‘get in line’ and potentially buy the shares at a premium in the open market, post-IPO.”

There are additional complications to including a retail offering in an IPO, including more rules around the prospectus and the requirement to keep the bookbuilding process (accepting applications for share placements) open for longer. However, new technology means the additional expense is now minimal.

The only significant difference is that investment banks brokering IPO placements on behalf of institutional clients would lose out on some of their commission. It would instead go to platforms like AJ Bell, HL and II if a chunk of shares went to small investors. However, with 2 million retail clients between them, the 3 platforms could make a significant contribution to IPOs, given the chance.

“It’s not fair and it is choking the capital-creation process.”

The company has signed up tens of thousands of private investors and intends to start offering the same approach to IPOs. The companies themselves only deal with PrimaryBid, so are not disincentivised by having to deal with the perceived added complication of managing hundreds or thousands of small retail investors.