Home Latest News Is Bitcoin a Bubble? The Arguments for and Against
Latest NewsStock & Shares

Is Bitcoin a Bubble? The Arguments for and Against

With Bitcoin having now broken through the $10,000 mark, and getting close to $11,000 on the same day, the crescendo of ‘bubble’ cries is rising almost as quickly as the cryptocurrency’s price. Having started 2017 changing hands at around $1000 per Bitcoin, what has been an immensely powerful bull run to $8000 a little over a week ago. However, the path hasn’t been entirely smooth. Volatility has still remained high throughout and touching the round-number milestones of $2500 and $5000 were both followed by severe, if short-lived, corrections of 20% and 30% respectively.

However, what has happened over the past couple of weeks has turned something on the edges of financial markets piquing interest into the kind of bull run that has no obvious precedent in the modern history of financial markets. A little over a week ago Bitcoin was at $8000 and moved to $9000 over last weekend – 7 days. $9000 to $10,000 took 2 days, and at a little past midday the same day, today, $11,000 is in sight with the exchange rate on Coindesk.com currently showing $10, 912. Of course, the higher Bitcoin’s exchange value goes, the smaller the percentage change needed for a $1000 gain. Nonetheless, the velocity of the upwards trajectory has still undeniably moved into warp speed.

Bitcoin is now, though still debatably, part of mainstream financial markets. A handful of CFDs and spread betting brokers started offering a market for Bitcoin last year, with most now doing so, having added Bitcoin and often some of the other cryptocurrencies to tradable assets lists over the course of 2017. The real transition (pending regulatory approval) into mainstream financial markets, however, was the catalyst for Bitcoin’s most recent surge in exchange value. The world’s largest futures and commodities exchange, the Chicago Mercantile Exchange (CME), announced on October 31st that on the condition that regulatory approval is secured, and that it was confident it would be, it would start to offer Bitcoin futures contracts.

The validation that a major international financial exchange preparing to launch futures on Bitcoin price has given the cryptocurrency has been credited with propelling it to the next level as a bona fide asset. Other mainstream, regulated exchanges have also since expressed their own intentions to offer traders Bitcoin-based derivatives. Within the context of broader financial markets, however, Bitcoin is still small fry.

The amount capital invested by funds in derivatives is estimated at somewhere between $544 trillion and $1.2 quadrillion. The significance of this context is that a relatively small change in demand, of the kind we’ve seen this week, can lead to a significant spike in price. Bitcoin’s move from $8000 to over $10,000 has come as the result of several hundred thousand private investors globally putting the equivalent of a few hundred dollars into Bitcoin, and some institutional hedging.

We wouldn’t pretend to know the answer to that question. However, let’s explore the arguments for and against Bitcoin’s 2017 bull market being a bubble set to burst spectacularly or simply Bitcoin reaching the tipping point that brings it into mainstream financial markets.

Arguments for a Bitcoin Bubble
Bitcoin produces no value: Warren Buffet, one of the most successful and respected investors ever certainly comes down on the side of the argument that says Bitcoin is a bubble. The Sage of Omaha, renowned for his soothsayer-like knack for picking investments was quoted in Forbes Magazine in early November as writing Bitcoin of with the statement:

“You can’t value bitcoin because it’s not a value-producing asset…it’s a real bubble in that sort of thing.”

The crux of Buffet’s argument is that Bitcoin doesn’t generate any income such as earnings or dividends. With no ‘intrinsic’ or book value, investing in Bitcoin is based on nothing more than the ‘next fool’ theory, where holders only make money if someone comes after them willing to pay even more for something akin to magic beans.

Bitcoin ‘doesn’t really exist’: Paypal co-founder Peter Thiel recently defended Bitcoin against accusations it’s not really a ‘currency’ because it can’t be easily exchanged for a broad range of goods and services by comparing it to gold. He is quoted as having said “it’s like a reserve form of money, it’s like gold, and it’s just a store of value. You don’t need to use it to make payments”.

However, the argument against this comparison to gold, and Bitcoin’s validity as a store of value, is that gold is a physical commodity that actually exists. You could, in theory, make a pile of all of the world’s gold reserves. Bitcoin is nothing more than lines of code.

Bitcoin is neither transparent nor regulated: another point touched on by Buffet in his dismissal of Bitcoin was that the lack of full transparency on what goes ‘into’ Bitcoin, and regulation of who and what controls the software ‘protocol’ behind the cryptocurrency. Cryptocurrency advocates say that the blockchain software that Bitcoin and other cryptocurrencies run on is innately peer-to-peer and has been built to not need central control or regulation. However, Buffet and other like-minded critics believe the lack of regulation means no-one can really confirm Bitcoin is not being manipulated.

Buffet summed this up with:
“It doesn’t make sense. This thing is not regulated. It’s not under control. It’s not under the supervision [of] any…United States Federal Reserve or any other central bank. I don’t believe in this whole thing at all. I think it’s going to implode.”

Bitcoin looks like a bubble, a big one: The chart below compares the rise of Bitcoin’s value in comparison to other historic bubbles from the 1990s onwards, including the dotcom technology bubble and the property market. It can be seen that the pace of Bitcoin’s value rise, as a percentage, has actually been spectacularly steeper than any of these other famous bubbles. And the data is actually from a couple of months ago when Bitcoin’s value was a mere $4000 and something. Two months later and it’s approaching 3 times that. 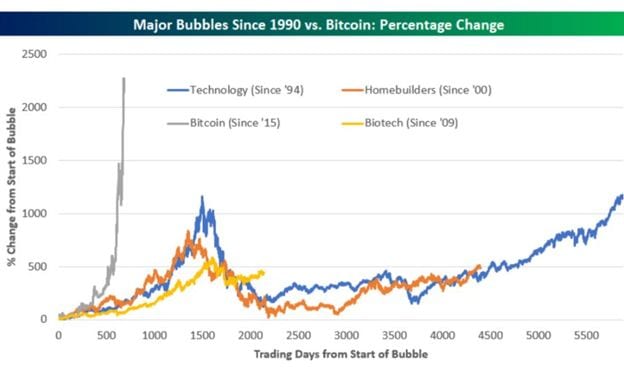 Exuberance outweighing knowledge: as recently as last year, Bitcoin’s value was making, at least against the backdrop of 2017, steady headway. It was mainly being bought, held and used by a smallish group of advocates who believed in it ideologically as an alternative to the perceived shortcomings of central bank and government-controlled fiat currencies, as well as techies who loved the potential of the underlying blockchain technology. A growing section of the public had heard of Bitcoin but few knew anyone who had actually bought it.

Fast forward to 2017 and especially the past couple of months and it is almost impossible not to hear about Bitcoin each and every day, with its bull run having become one of the dominant mainstream media stories of the autumn.

This has led to a speculative investment frenzy driven by buyers who know very little about Bitcoin and its strengths and weaknesses and have been ready to put some money into it ‘just in case’. Greed and exuberance is fuelling the current price boom.

Arguments Against a Bitcoin Bubble
Bitcoin is special: the main argument against the current rise of Bitcoin being a bubble is that it should not be compared to other assets that have seen steep price rises followed by a crash because Bitcoin genuinely is special. It is a brand-new technology-based financial system in the early stages of traction and adoption that improves upon existing fiat currencies and payments systems that require central authorities.

Within this context, it is argued that because adoption and Bitcoin ownership has come from such a low base, volatility and quick price rises can be considered expected as the cryptocurrency hits major adoption milestones. The stated intention of the CME, the world’s largest futures and commodities exchange, not followed by the Nasdaq, to start offering derivatives on Bitcoin price was the main catalyst that provoked the most recent price surge. With Bitcoin’s price, and that of other cryptocurrencies, mainly influenced by adoption sentiment, the result of being brought into the fold of mainstream finance naturally lead to a big price boost.

Bitcoin Keeps Coming Back from Significant Price Drops: a favoured argument of Bitcoin advocates on why this year’s price rise is not a bubble is the fact that there have already been several big drops in price and Bitcoin has come back stronger. Bitcoin immediately dropped by 20% and almost 40% after $2500 and $5000 milestones were hit, the latter after a crackdown in China that coincided with the symbolic price level.

Both times the cryptocurrency quickly recovered and moved beyond those resistance levels. If it were a bubble the recovery would have been far slower. Yesterday when Bitcoin rose above $11,000, rather than $10,000 it again dropped, back to around $10,000, but didn’t crash. There have been 3 major crashes for Bitcoin following fast price rises and none have lasted long and new heights were soon reached.

Bitcoin is both a bubble and not a bubble: A point admitting Bitcoin is currently in a bubble might not immediately seem to fit in an ‘arguments against a bubble’ list. And it probably doesn’t fully but merits inclusion based on being a generally positive sentiment. It’s also the argument that probably aligns most closely to the opinion of most moderate cryptocurrency supporters. This position admits that current prices probably have to be considered a bubble due to the amount of ‘froth’ and ‘hype’ around Bitcoin at present. It is hard to argue that the pace of current rises hasn’t been provoked by the kind of ‘euphoria’ that is the clear mark of a bubble.

However, as part of the bigger picture, if Bitcoin continues to establish itself as either a genuine currency or store of value then present price levels will be small fry due to the 21 million units cap on Bitcoin. As such, shorter term ‘bubble’ price fluctuations should be largely ignored. There will be plenty of volatility yet to come but the longer-term direction will still be up.

Conclusion
Anyone considering investing online in Bitcoin, or any other cryptocurrency, has two choices. The first is to consider it a shorter-term investment with the aim of hopefully making quick gains on shorter term volatility (over days, weeks or months). In this case CFDs or the soon to be available futures and other derivatives make more sense than investing in actual Bitcoin. This could also mean betting against Bitcoin through short positions.

The second choice is to buy and hold and largely ignore anything going on over the next couple of years, regardless of the buzz or bubbles and crashes. If Bitcoin does go mainstream the investment will be hugely successful. If it doesn’t, and there are many reasons why it may not, including new, better cryptocurrencies that don’t yet exist appearing or regulated cryptocurrencies being released by banks and governments, then the investment is lost.

Bitcoin is almost certainly currently in a price bubble, of one form or another. However, longer term, does that matter to anyone buying some Bitcoin if it is part of the journey to it being established as a genuine asset class or currency? It probably shouldn’t, as long as they are happy to write off any investment in Bitcoin if that scenario doesn’t eventuate.

Professional Stock Market Investors Buying Back In to Market

Despite the ravages of the Covid-19 pandemic the UK’s renewable energies generation capacity grew... END_OF_DOCUMENT_TOKEN_TO_BE_REPLACED