Home Real Estate Is It Really Time to Get Out of the London Property Market?
Real Estate

Is It Really Time to Get Out of the London Property Market?

London has built up a reputation as a bullet-proof property investment market. True, rental returns may not have been the highest achievable across the UK, especially for those who have come into the market at the heights of recent years. But, in the minds of more than enough buyers to keep the market not only buoyant but showing strong growth, that is more than compensated by strong capital appreciation and an insurance-like premium against market downturns.

The prices of residential property in London, and rents, especially in more upmarket neighbourhoods, dip less than elsewhere in the country during downturns and recover faster. ‘It’s a price worth paying’, has been the mantra of the investor in the London housing market.

However, there is a growing suspicion that the truism that London is a ‘safe haven’ property market and selling any property in London is financial folly may be about to be tested. Property website Rightmove’s most recent data indicated that the average price of a residential property in London dropped by a hefty £18,000 between August and September. In exclusive Kensington and Chelsea, average asking prices dropped by over £300,000 over the same period. Those figures represent a hefty ‘on paper’ loss for almost anyone.

Nationwide data also recently released showed that prices have dropped across London year-on-year for the first time since the financial crises, while still showing strong growth elsewhere in the country. 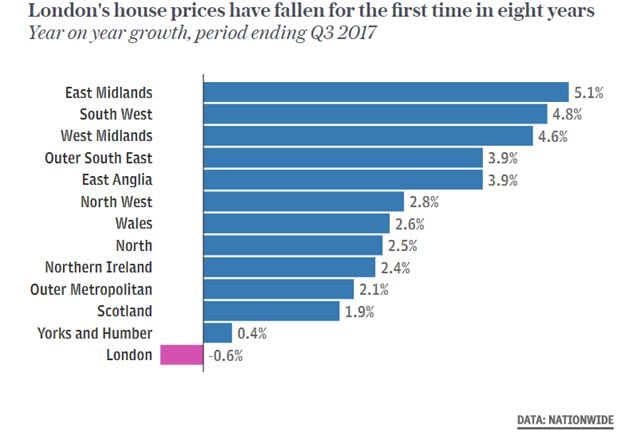 Last week a UBS Wealth Management report claimed that the average time required to sell a property in London is currently 10 days longer than this time last year. Is the evidence mounting that the London property market is on the verge of a crash and investors might be wise to bail out now, locking in capital appreciation gained since they bought and invest the proceeds elsewhere?

UBS Wealth’s Global Real Estate Bubble Index suggests it might be worth considering. The index defines ‘bubble’ territory as a reading over +1.5, with London currently registering +1.77, making it the world’s six most overvalued city according to the methodology employed. 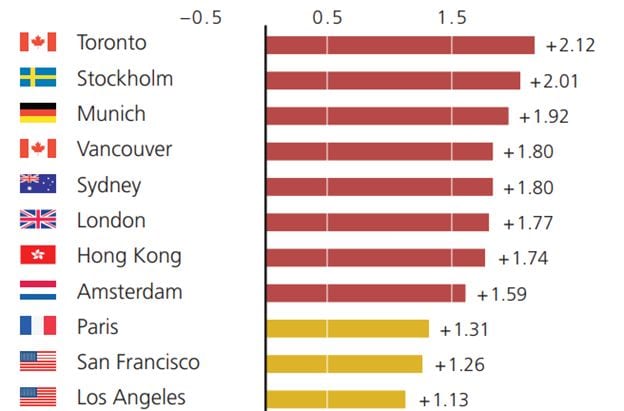 Adjusted for inflation, UBS considers London residential property prices to be up 45% in the past 5 years and 15% higher than where they were at the onset of the financial crisis. This is against a backdrop of real incomes still 10% lower than they were in 2007.

So, clear cut case, right? For anyone who owns a residential property, the primary aim of which is investment and not as a home, it’s time to cash in and get out of London. 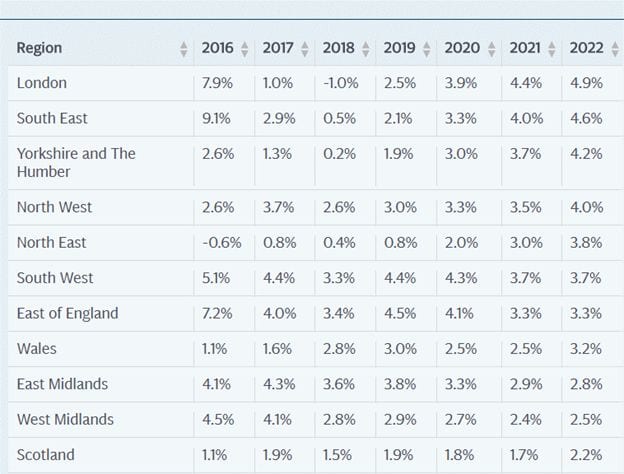 Source: as presented in The Telegraph – Nationwide for historic data, KPMG forecasts for 2017-22

Bounce Back?
For those able to be patient though, KPMG house price forecasts up to 2022 suggest that London is likely simply having a little blip. In recent years the London property market has not been performing typically of a ‘safe haven’ asset class. 45% capital appreciation over 5 years is more typical of a high growth, high risk asset class and always unsustainable by any stretch of the imagination. The table above, if KPMG’s forecast pans out, would mean what we are seeing now is nothing more than a relatively modest correction. A couple of years of stagnation before further growth.

A recent article in The Telegraph compiled current and historical housing price data with KPMG’s forecasts, indicating that within three years London’s property market will once again be the strongest in the country. Annual price rises of between 3.9% and 4.9% put the capital comfortably ahead of the regional competition, with the surrounding South East the closest rival.

Considerations
There are arguments for and against selling out of London at present. Perhaps the most important consideration for landlords with property in the capital is affordability. In addition to a dip in sales prices, there are a handful of factors that are likely to make owning property as a buy-to-let landlord more expensive over the two to three years before the London market is expected to bounce back.

Interest rates are expected to rise in the near future, with a 0.25% hike likely either before the end of the year or in Q1 of 2018. Whatever the actual timeline eventually is, it would be wise to price in the potential for higher interest rates into any mortgage affordability calculation. The recommended stress test is to assess the viability of comfortably keeping up with mortgage payments should the interest rate paid hit 5.5%.

Mortgage Relief Cuts for buy-to-let landlords announced last year will also kick in over the next few years and should be priced in to the case as to whether to stick or cut loose on London property. New rules meaning mortgage interest payments and other finance costs will no longer be deductible from rental income when landlords declare their taxable income. These are being phased in over four years, meaning that this year 75% of interest payments are still deductible, 50% next year and 25% in 2019/20, before dropping to zero. Landlords should carefully consider if these changes make a serious impact on the business case for owning a London rental property.

Falling rental values in London are also being forecast in some quarters due to Europeans leaving London in the wake of Brexit and the regular flow of relocators to the capital relocating elsewhere. This forecast is perhaps more uncertain with all the noises currently coming from the government indicating that EU citizens already living in the UK will be welcome to stay post-Brexit. There may well be some who leave anyway for different reasons, including Brexit, and the replacement flow will certainly be reduced. How much of an impact that will have on demand for rental property in the capital is hard to predict. Nonetheless, it would also be wise to apply an affordability stress test to a scenario where rental income does drop for a London property.

A Good Time to Sell and Maybe Even a Good Time to Buy
If London landlords believe the business case around their property is strong enough to survive a stress test factoring all of the potential rise in expenses and/or slide in income mentioned above, the London market will most likely bounce back strongly within a few years. Of course, there is no guarantee that that KPMG forecasts will prove to be accurate but there is equally no guarantee that Brexit will impact London’s economy and housing market significantly and it may bounce back ahead of schedule.

Selling up London property now and locking in the profits from significant capital growth over the past few years has its merits as a strategy, especially for landlords whose business model may become fragile as a result of the changes mentioned. However, holding London property long term on the principle that ‘London will always be London’ and value will hold is also a strong argument.

The conclusion has to be there is no conclusion and very much depends upon personal circumstances. With the market in a lull, now might also be a good time to buy in London for those buy-to-let landlords with the financial strength to muster a 25% deposit and pass the stricter lending rules on mortgages. Food for thought!

Despite the ravages of the Covid-19 pandemic the UK’s renewable energies generation capacity grew... END_OF_DOCUMENT_TOKEN_TO_BE_REPLACED