Is It The Beginning Of The End For The Google Search Monopoly?

In 2015, Google created Alphabet as a holding company. The new entity was designed to house and provide better corporate order to Google and its growing brood of daughter companies. YouTube, Android, the Google Cloud Platform, hardware and smart home business remained under Google.

*as of early 2018, Nest was brought back into Google and renamed Google Nest

The most obvious distinction between the companies that are part Google and those that are housed under Alphabet, is that those in the former group are profitable. Those in the latter are either ‘moon shots’ or, like self-driving technology unit Waymo, have a clear, probably bright, future but are still some way from being able to sell commercially viable products and services at scale.

The Alphabet units outside of Google are, at least for now, an expense to the company. Some, especially Waymo, which has seen several billion ploughed into over the years, a considerable expense.

Luckily, thanks to Google, Alphabet can afford such largesse. Waymo brought in its first outside investors earlier this year to raise $3 billion. But it has already spent multiples of that itself, including an estimated $3.5 billion just on test driving its tech in Silicon Valley and Phoenix.

Self-driving fleets may well become a reality by the end of the current decade. And Waymo considered to be leading the way in autonomous vehicles R&D. So, there is a good chance that investment will eventually pay off for Alphabet and its new third-party investors. But it’s all thanks to the huge amounts of cash generated by Google. Alphabets ‘other bets’ bring in next to nothing and typically operate at a quarterly loss of over a billion dollars.

And there is an argument that within the next decade, Alphabet will not be able to rely on the Google search engine’s dominance to generate most of its revenues. Or, at least, not to the same extent.

Despite the close attention being paid by investors to the quickly growing Google Cloud unit, over the 2019 financial year, it still accounted for just 5% of Google’s revenues. That can be expected to grow healthily year-on-year. But it is still digital advertising, especially ads sold on Google’s own platforms, mainly text ads featured to fit search intent on its dominant search engine, that brings in the lion’s share of Google’s revenue. Around 60% of it.

Another 9% comes from YouTube advertising and 13% from ads posted on the Google AdSense network. But even these two figures, 22% of Google’s revenue, rely on the audience of the ads on third-party websites and YouTube also using the Google search engine. It is the data gleaned from users’ ‘Googling’, that allows other digital ads to be better targeted to their general and current interests.

Without the Google search data, targeting would be poorer, the service less precise, and advertisers wouldn’t be able to generate the same ROI. That stands true for both the ads displayed directly when a user ‘Googles’ something and those that follow them around when they are on other websites. They are still largely targeted using data generated by ‘cookies’ – digital markers used to follow online behaviour. A majority of those cookies are generated, either directly or indirectly, from user behaviour history on Google’s search engine. 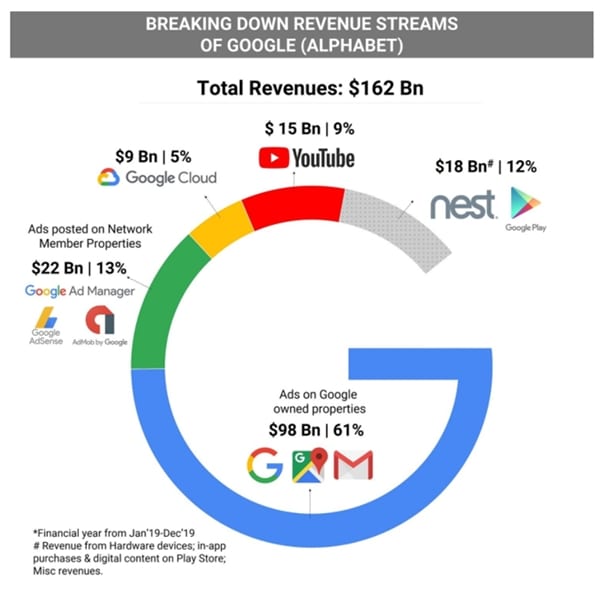 Google Search Engine Monopoly Is Key To Its Advertising Income

The money-making machine which means Alphabet is one of the 5 biggest companies in the world by value has been made possible by Google’s near-monopoly of the online search market. Globally, over 85% of enquiries made by online search engines go through Google. 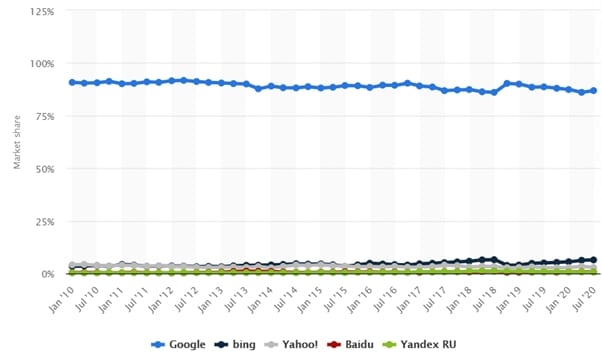 The only commercially meaningful geographies in the world where Google does not have a near monopoly of the search engine market are China and Russia, where localised alternatives. In China, where protectionism has prevented Google from gaining any real foothold, Baidu is the largest search engine but gives up significant market share to rival Sogou.

In Russia, Google still enjoys the position of search engine market leader but is closely run by local rival Yandex. And its 50%-60% market share is much lower than the 85% and above it has taken in most of the rest of the world.

How Did The Google Search Engine Establish Its Monopoly?

Google hasn’t always dominated the search engine market in the way it now has for around 15 years. Between 2001 and 2003, the Google search engine held just 12% market share, compared to MSN’s 15% and Yahoo’s 36%. It was around 2005 that Google’s share of search moved above 50%. And another few years before it established the near monopoly we have grown used to today.

So how exactly did Google become such as dominant force in search around the world? It wasn’t by acquiring competitors, nor thanks to government support in the form of protectionism. Its main competitors over the years were also U.S. technology companies.

Ultimately, Google cornered search by doing a better job than its competitors. Users chose to ‘Google’, rather than to ‘Yahoo’ or ‘Bing’ because it gave them the information they were looking for better, faster.

Once it had established a market leading position, Google also ruthlessly exploited its position of strengthen and put more distance between itself and rivals. It did so through a combination of investing in talent and R&D. And, crucially, leveraging the increasing volumes of data it had access to as generated by search queries.

Has Google Exploited Its Search Engine Dominance In A Way That Now Counts As Unfair Competition?

However, there is an argument that at a certain point, Google started indulging in anti-competitive behaviour to maintain the near monopoly on search that continuing to grow its revenues relied upon. Anti-trust suits in Europe and the USA say one of the ways it did so was through its Android mobile operating system. 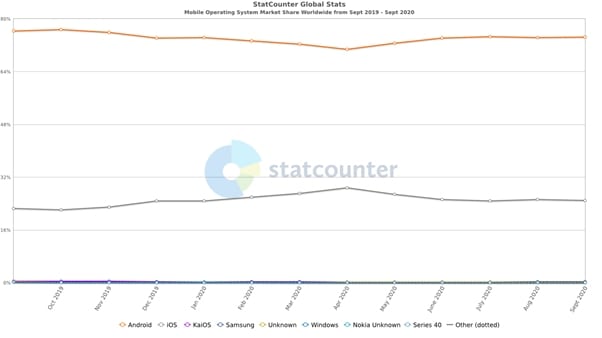 Around 75% of the world’s smart phones are powered by Google’s Android OS, which it licenses to hardware makers. Microsoft and others have tried to compete with Android and failed. Only Apple, whose iPhones run on its own proprietary iOS, is a genuine rival with just under 25% of the mobile OS market.

European and U.S. anti-trust regulators believe that that Google has put too much pressure on smart phone manufacturers that use the Android operating system to include the Google search engine application and other Google products, such as Google Maps, Gmail and the Play Store as the pre-loaded default apps in their category. That, increasingly argue regulators, gives Google an unfair advantage in maintaining its market dominance by denying potential competitors a fighting chance.

Google has also been accused of other strong-arm tactics including monetising its own services at the expense of competitors and even advertisers. At varying points, Google has given exposure to its own services, such as insurance quotes and flight tickets cost, when some of its biggest advertisers are in those spaces.

Its usually been for a brief period and excused as an ‘experiment’ before getting the tech giant into serious hot water with anti-trust regulators. But still a clear indication of the company being willing to push the boundaries of anti-competitive behaviour.

Could Google Finally Be Facing A Regulatory Crackdown and Serious Competition After Apple Announces Search Intention?

Over the years, Google’s giant tech rivals have toyed with or tried to compete with it on search. With little success. Facebook through its hat into the search ring a decade ago and gave up around 5 years ago. Amazon is something of a competitor on search when it comes to retail products. But users still often first go through Google to get to Amazon.

Apple is increasingly pushing into search. With a strong position in the mobile OS market, does it have a better chance of finally taking some meaningful market share from Google? Its previously attempted to encroach on Google’s space with its own maps application. Which was a dismal failure. Would an Apple search engine fare any better?

Most attempts by giant tech companies to take on rivals on their home turf, where they are already well established, results in failure. Apple’s attempt at maps one prime example and Microsoft’s unsuccessful investments into search through Bing and the Windows mobile operating system and smartphones another. Microsoft are even the monopoly in desktop operating systems and still failed to make headway in mobile.

Apple perhaps does have some hope. Google’s search market position is possible because of three things:

Apple has a position of strength when it comes to all three. Apple’s Siri home assistant is also already arguably a search tool and well established. Though it currently offers Google results to voice-controlled searches. Apple will not break cover soon. The current DoJ complaint against Google is even based on its search engine’s prominence on Apple devices.

But Apple is known to have been crawling more of the web to build a search index, placing some of its own search results in front of iPhone users, and hiring engineers. It will be diplomatically discrete for as long as possible but Apple has clear intentions to eat into Google’s share of the search market.

For Google investors, it’s something to keep a close eye on. If Google were to lose any significant amount of the search engine market share, it would seriously hit its revenues. One day, whether as a result of regulatory pressure or a genuine rival on quality, probably both, Google’s share of the search engine market will start to slide. All empires eventually crumble.

The question is, do Google’s long-term investments in cloud computing, autonomous vehicles, life sciences and the rest start to generate meaningful revenue in the meanwhile? Google has to hope it can delay the erosion of its search-based money printing machine for long enough that the other areas it has invested heavily in start to bear fruit. Cloud computing already is and will become an increasingly important revenue generator. But Google needs more diversity in its revenue streams if its search monopoly begins to be eroded.

If Apple is serious about search, that moment could come before the end of the decade that has just commenced. Which could make Waymo’s pursuit of the driverless vehicles market a race against time. Along with the Google Cloud Platform, Waymo will have to pick up the slack if ‘Google’ begins to loses its status as a verb.