Is It the End of the Road For the FAANGs As A One-Stop Shop for Investors?

For the past few years one of the most consistently successful investment strategies has been arguably the simplest – buy the FAANGs. The FAANGs, as most of you investing online into a stocks and shares ISA or SIPP will probably know, are the five big, fast growth U.S. tech companies – Facebook, Apple, Amazon, Netflix and Google (Alphabet). However, last week Facebook’s share price performance made a sudden break from the rest of the pack, plunging by 20% after publishing stalling Q2 user and adverting revenue growth.

The previous week, Netflix had also seen its share price crash – by as much as 14% at one point during afterhours trading – after the subscription-based content streaming company missed forecasts for new subscribers when it posted its own Q2 results. Amazon, on the other hand, was boosted as the company announced record Q2 revenue of $2.5 billion and Google-owner Alphabet also beat the Wall Street analyst consensus. Apple has still to report at the time of writing.

However, since the beginning of the week after Facebook’s share price fell off a cliff the malaise has proven to be contagious, with all of the FAANGs suffering losses. Facebook itself has failed to bounce back and has seen its share price dip slightly further. But with Amazon and Alphabet also now down, despite posting strong results, along with Apple whose own report will be made this week, analysts are beginning to question the underlying logic of the tight correlation.

Certainly, all 5 FAANGs are part of the same tech sector and combine scale with high growth. But they are also in largely distinct verticals and have distinct business models. The question is now whether markets will continue to treat the 5 in combination as a de-facto big tech mini-index, buying and selling the stocks of the different companies in unison? Or will we see the stock market fates of the 5 begin to diverge with investors paying more attention to the individual fundamentals of each separate company? And why have the FAANGs been so tightly correlated in the first place over the past few years?

The Rise of The FAANGs as a De-Facto Mini Index
Barring the odd dip, usually the result of privacy, competition or taxation regulation, fines or threats of a clampdown, the five stocks have had an unerring and rapid ascension over the past 5 to 10 years.

Over at least the past half-decade, the FAANGs have proven themselves to be both relatively safe and extremely profitable. The result has been investors, both retail and institutional, increasingly viewing them as almost a single entity. Capital has been allocated to the FAANGs rather than the individual companies. 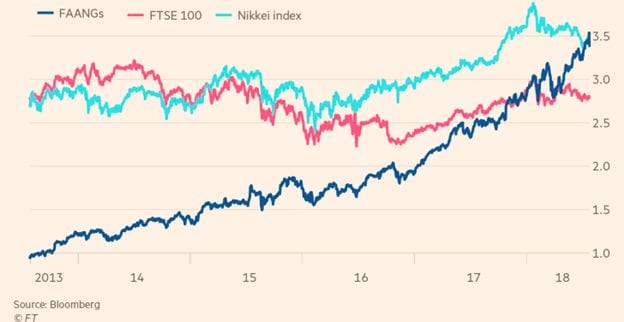 The FAANGs have become their own mini-index for passive investment like the FTSE 100, S&P 500, Nasdaq and so on. There’s even an official index, the NYSE’s FANG+, comprised of the 5 core FAANG stocks plus “a select group of highly-traded growth stocks of next generation technology and tech-enabled companies”, including Alibaba, Nvidia, Baidu, Tesla and Twitter.

But just as a core group, the FAANGs have become an established, if unofficial, mini-index in themselves. So much so that as of mid-May 2018, the five stocks had contributed 64% of the S&P 500’s total returns for the year. That’s 1% of the companies in arguably the world’s most influential index, and indisputably the index that has the most capital invested in it, delivering 64% of the returns generated by investors. 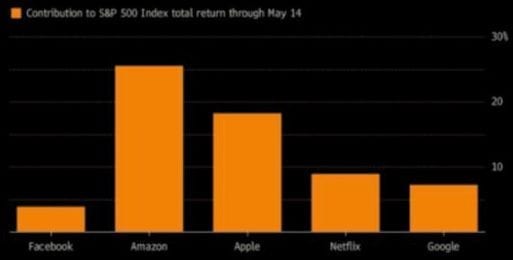 The result of that anomaly was an acceleration of the pattern. “Why invest in the whole S&P 500 when most of the rest of it is acting as a drag on the FAANGs” appeared to be conclusion of capital markets. That approached was reinforced when U.S. President Donald Trump started slapping new import tariffs on a wide range of materials and goods sparking concern an international trade war is on the cusp of igniting. On the basis that tit-for-tatt tariffs would most impact physical goods and raw or processed material imports and that the FAANGs’ international revenue streams would be relatively unscathed, in comparison, markets began to treat them as a ‘safe haven’.

The result was another surge in value for the FAANG group as institutional capital flowed into the stocks. As the graphs above demonstrate, by the end of June FAANG gains were such that they accounted for a massive 98% of the S&P 500’s overall return for the year. They just kept going up as much of the rest of the index suffered from trade war nerves. That trend continued until the second half of July and the reporting season that saw the fortunes of the different companies diverge.

Why the FAANGs Have Been So Closely Correlated

All five companies are valued at very aggressive price to earnings multiples. Apple, a manufacturer, has a p/e ratio of 17.5, Alphabet, who’s main revenue stream comes from digital advertising is at 33, Facebook, also digital advertising has a p/e of 23.64. Netflix and Amazon are most aggressively priced at whopping multiples of 141 and 161 respectively.

Already dominating the key verticals within the digital revolution the economy, and wider society, are undergoing, the five companies look like becoming corporate colossuses on a scale the world has never seen before – richer, more influential and in many ways more powerful than most nations can realistically claim to be.

Investors are betting on a future where the FAANGs straddle a digital economy, their current size and wealth putting them in the position to corner new tech-cornered business models. To varying degrees, the five FAANGs are all investing heavily in new tech verticals from driverless vehicles to AI and VR. They have ambitions beyond their core businesses and seek to protect their present position of dominance through the building of sprawling tech empires.

The size of the FAANGs, other than Netflix which is the relative minnow of the group at around $150 billion they are all worth $500 billion +, and the fact that they are all still growing at breakneck speed, has created a unique investment micro-climate. Their only obvious rivals are their giant Chinese peers and approximate equivalents in the East such as Alibaba (Amazon), Baidu (Alphabet), Tencent (Facebook) and Huawei (Apple). The former three have already been termed the BATs.

However, at least for now, the two rival groups appear to have struck some kind of natural balance, assisted by protectionist measures by the governments of their domestic markets, and have divided the world into rough West and East tech empires. Direct competition is largely confined to attractively large new ‘third country’ markets such as India, Brazil and Indonesia.

According to a recent article in The Economist, total investment by the 10 biggest U.S. and Chinese tech companies has tripled over 5 years to $215 billion, making them now the biggest investors in the world. A significant chunk of that was spent acquiring stakes in the most promising tech start-ups in verticals from AI to biotech. This is reinforcing the belief in capital markets that not only will these companies continue to grow but their reach will extend to the extent that they will control every big, profitable tech vertical, leaving crumbs for the rest. FAANG correlation has largely been the result of capital markets betting on this growing tech oligopoly.

Has the Moment for FAANG Divergence Now Come?

Last week’s results have, however, given investors a reminder that the five companies are distinct entities with different business models, growth patterns and challenges. They are also increasingly encroaching into each other’s territory as they are forced to feed capital markets’ hunger for continued growth.

Amazon is already rivalling Netflix in the content streaming space through Amazon Prime and there are rumours Apple, who recently signed up Oprah Winfrey to make shows that don’t yet have an obvious distribution channel, is also about to make a move. Facebook is a rival to Google in the search space and Amazon in ecommerce and Alphabet has moved into the mobile device market with its Pixel smartphones. Amazon has already had one failed attempt to rival Google’s Android mobile OS when it launched its own Fire OS.

New tech verticals (eg. Voice controlled assistants and driverless cars) are now all but guaranteed to see direct competition for market share between the FAANGs. It is unlikely each will have balanced levels of success as they move into more direct competition in their pursuit of continued growth. Also, all of the companies are spending more than ever before with capital investment now reaching levels usual for listed companies. That’s in comparison to previous years when the big tech companies had relatively low capital expenditure in comparison to revenue. The cash piles amassed are now being eaten into in the pursuit of empire building in new spaces. Only Netflix, by some distance the smallest of the FAANGs, is still almost completely focused on its original core business of content streaming and production.

Facebook’s recent slowing growth has reminded markets that each of the FAANGs have their own challenges. Combined with competition between each other in new verticals and the increased risk attached to investing heavily in unproven new revenue models that may herald a new era of reduced correlation between the stocks.

The FAANGs have all seen a drop in the days since Facebook’s implosion and Morgan Stanley has predicted a significant correction has begun. The low liquidity of summer trading could make the FAANGs and wider market vulnerable if Apple doesn’t deliver an impressive set of results to counter nervousness.

Many analysts believe the FAANGs are due a correction, after an inflow of $20 billion to dedicated technology funds already this year. That’s more than over the whole of 2017, which was itself a record breaking year for capital allocated to tech stocks. The S&P 500 has gained 40% since 2015 in comparison to the 200% return of the Fang+ index.

If anyone knows what happens next they will become very rich but despite the threat of a correction no one is calling an imminent implosion for the FAANGs. The consensus 12-month target for Facebook’s share price was downgraded from $229.53 to $209.50 after last week’s results, which is still leaves room for good growth from the current level of just below $180.

“Valuation-wise it is interesting now. There are still some clouds on the horizon but Facebook — and many of its other Big Tech peers — remain enviably profitable and still enjoy robust growth outlooks.

“Technology stocks have performed very well, and are in need of a correction but these are still real winners with strong business models”.

The likelihood is that the FAANGs and other tech stocks will remain closely correlated but the ties will now be weakened and continue to loosen over the years ahead. The era of institutional capital passively investing in the core and wider group without meaningfully distinguishing between the individual companies could, however, be coming to an end. Private investors holding the stocks would be best advised to do the same.