Is It Time For Investors To Bring Japan Back In From The Cold?

As the hosts of the ongoing Rugby World Cup, Japan, whose team has already set out its stall as hosts that will defend its honour as the ‘home side’ with a rousing victory over Ireland in the group stages, finds itself in the international limelight. The event is forecast to give the country’s economy a £1.5 billion fillip, which can only be a good thing for a country that has been stuck in a cycle of deflation and rock bottom inflation for over 2 decades now. 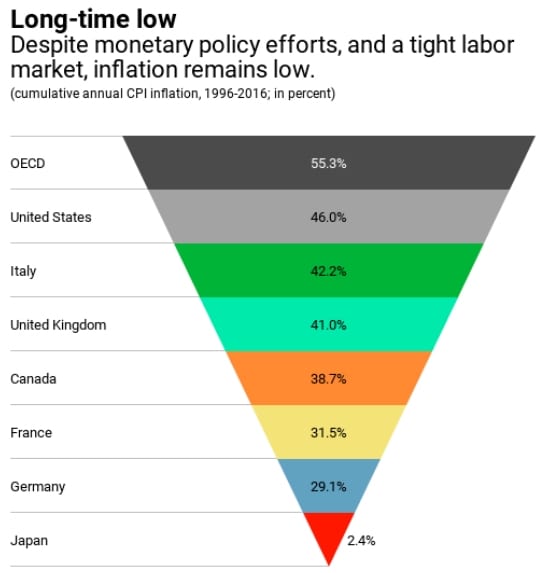 Despite struggling with its inflation problem for years, Japan’s economic problems certainly count as ‘First World’ problems. Net salaries in the capital Tokyo are still among the highest in the world, though living expenses are also high, and across the country Japan is still very much a nation that by and large provides its residents with a high standard of living.

Nearly 8 years of ‘Abenomics’, named after Prime Minister Shinzō Abe, have tried to address the issue by pumping money into the economy. To some extent it worked and the period up until 2018 saw saw lower fiscal deficits, near-record-low unemployment, and higher female labour force participation. But inflation remains stubbornly low, and macroeconomic and financial sector challenges are set to grow as demographic headwinds – namely the aging and shrinking of Japan’s population – intensify. Asian growth is also generally slowing across the region. Despite that economic growth has been solid within the context of previous years. And most optimistically it is being led by consumer consumption. 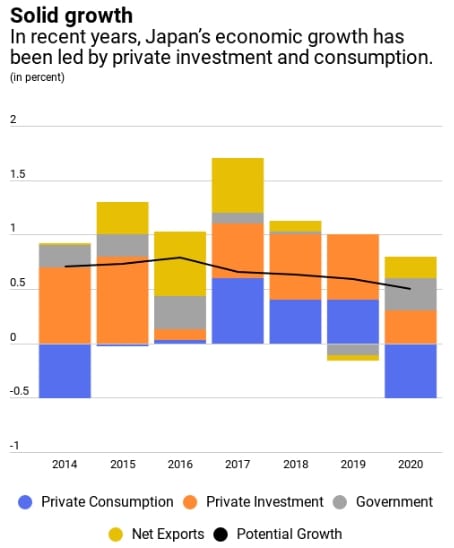 Japan is also desperately trying to modernise its traditional corporate structure – something that was an engine of growth up until the eighties but failed to adapt over the years since.

It’s far from out of the deflationary woods and Japan’s population is still expected to drop by another 25% over the next 40 years. The Japanese are simply having less children as a result of cost of living pressures, the amount of money and time the culture dictates is invested into each child and busy lifestyles that often include long working hours.

But despite the challenges, some analysts believe it is time for international investors to look at Japanese equities again. Let’s take a look at the case presented, starting with the challenges the Land of the Rising Sun still faces.

The Tokyo Stock Market has dropped by 5% over the past months, weighed down by slowing economic growth across Asia. While the USA-China trade war is benefiting some economies in the region, Vietnam in particular, as manufacturers move production facilities to escape the punitive tariffs imposed on Chinese exports, Japan, with its high salary levels has not been one of them. Its exports to China have declined as tariffs have bitten into its economy and individual spending power, resulting in a drop in manufacturing profits.

“The deterioration in international trade is weighing heavily on Japan’s export-orientated economy. At the same time, we expect the 2 percentage point increase in the consumption tax, which is to be implemented on October 1, will tip Japan into economic contraction in the fourth quarter of this year.”

The country’s ageing and falling population is also dragging on consumer spending and growth. The number of people aged 15 to 65 has fallen by about 0.5 per cent a year for two years. Japan’s national debt is also an issue, sitting at 230% of GDP, making it the highest in the world. Japan’s blue chips have also preferred to amass cash rather than return it to shareholders.

Hope For The Future

But corporate Japan is changing in a way many hope will be for the better and could usher in a more prosperous period for the Tokyo Stock Exchange. In 2014 and 2015 the country introduced new ‘stewardship’ and ‘corporate governance’ codes designed to act as triggers for reform of historical management practises that are no longer delivering or even appropriate in the modern economy. They also introduce far more accountability for upper management.

Japanese companies are also finally and belatedly returning cash to shareholders through improved dividends and share buybacks. The money paid out to shareholders has roughly doubled over the past five years. There is also more variety and independence of ownership. Two decades ago more than 50% of all the equity of Japan’s public companies was held by other public companies. There is even a specific term for these equity crossovers – keiretsu. But the practise created an ‘old boys network’ mentality and culture and was not conducive to innovation and competition. That has also begun to change with the level of criss-crossing equity holdings between companies falling. More companies are including external directors on their boards and anti-takeover defences being, to an extent, dismantled.

One of the biggest catalysts to the changes currently happening in Japan’s stock market is that the biggest pension investor in the world, the government’s Global Pension Investment fund, is becoming a major shareholder in many Japanese companies. It’s using its growing influence to drive improving corporate governance and accountability standards.

The spirit of entrepreneurship has also belatedly begun to grip Japan and the number of start-ups in the country has exploded. More, especially younger, workers developing their careers in the more innovative, creative and dynamic start-up environment is shaping their professional culture away from the staid management practises of many of Japan’s corporations.

Where Are The Opportunities In Japan’s Stock Market?

There are certainly now opportunities for investors in Japan. But what’s the best approach to exposure to one of Asia’s wealthiest nations? JP Morgan’s Japanese investment trust manager Nicholas Weindling says that he is most enthusiastic about non-cyclical industries such as automation robotics and other technologies and care for the elderly – one market that is undoubtedly growing in Japan. He also sees plenty of potential in e-commerce and strong brands like Fast Retailing – the holding that owns the Uniqlo brand.

“We think trends such as electrification and digital interconnectivity are here to stay, as is supplying demand from China for quality manufacturing and automation. We favour companies with a strong brand and a dominant industry position, which are also in good financial health and lifting shareholder returns in the form of higher dividends.”

Japan could also prove to be one of the more resilient developed markets during the next major global economic downturn, making it a potentially useful hedge. The country’s corporate cash piles are, despite the growing willingness to return more to shareholders, at record highs. This will help provide a buffer during challenging times and allow Japanese companies to avoid having to reduce salaries or lay off staff only to have to rehire new additions when things turn around again.

That, in turn, should mean incomes don’t fall much in Japan and keep consumer spending bubbling along. The economy is also gradually moving more towards the service industry from manufacturing. That should soften the consequences of the fallout of the US-China trade war if it rumbles on for a long period or deepens further. The current Rugby World Cup and next summer’s 2020 Olympics that Japan will also hope should also keep consumption levels healthy. A possible economic slowdown over the fourth quarter of this year isn’t expected to hold, with growth forecast to return in 2020.

For investors interested in taking exposure to Japan’s stock market, what are some of the options? We’ve already heard from the managers of Aberdeen Asset Management’s Aberdeen Japan Investment Trust and Nicholas Weindling, who manages JP Morgan’s JPM Japan and Japan Equity funds.

Baillie Gifford offers the Shin Nippon investment trust that focuses on higher growth and more entrepreneurial companies that look like disruptors of tradition industries and companies in Japan. Another Japan-focused Baillie Gifford fund is its Japanese Income Growth vehicle which is focused on corporations with the largest cash piles starting to return more to shareholders by increasing dividends.

AVI Japan Opportunity offers exposure to Japanese small-caps where it can have more influence on improving shareholder value and corporate governance.

Finally, the Comgest Growth Japan fund’s strategy is to invest in “quality growth companies with strong competitive advantages and high barriers to entry”.