Is picking the right stock market investments about to get a lot harder?

The generally accepted rules that underpin winning stock market investments is to spread risk, track the broader market and ignore turbulence. If we stick to those simple rules over the long term, usually defined as at least 15 years, everything should, say the experts, work out fine. Why? It historically has.

There is strong evidence to back the argument it’s hard to go wrong with stock market investments if those rules are followed. Statistics compiled for an article in The Balance by personal finance writer Ben Luthi assert, with caveats, the average annual return of an investment in U.S. stock markets is around 10%.

That’s based on data since 1926 and a broad-based investment strategy of tracking the S&P 500 index, and Standard and Poor’s 90 index before the former was established in 1957. The calculation is based on the long term and is subject to considerable variation over any given shorter term period.

For stock market investments in the UK’s FTSE 100 index, an approximate equivalent to tracking Wall Street’s broad-based S&P 500, financial markets trading platform IG calculated average annual returns of 7.75%. That figure was based on data between the years 1984 and 2019. 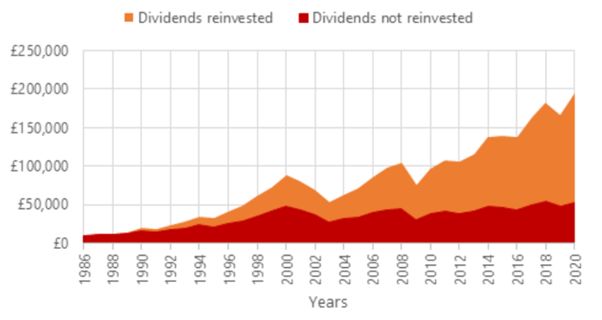 Without being overly strict on the fact the two figures look at different time periods so are not quite comparing apples to apples (over longer periods UK-based stock market investments don’t differ greatly from the period the IG figures are based on), data shows broad stock market investments tend to work out well when the period over which they are made is long enough.

There have been 3 extended bull runs over the past several decades when generating strong returns from broad-based stock market investment has been relatively straightforward and a case of simply tracking the major indices of developed markets such as Wall Street and London.

The long post-war recovery period that ran to the end of the 1960s was the first such period, followed by the 18-year stretch between the 1982 recession and dotcom bubble. The 11 years between the start of the recovery from the stock market recovery from the financial crisis in March 2009 and Covid sell-off from late January 2020 represented another long, uninterrupted period of gains.

But there have been periods during which timing could have gone against stock market investors. The 1970s, a period marked by high inflation, was a more treacherous time for stock market investments. The 10 years at the start of the current century between the dotcom bubble and the financial were also more difficult to navigate.

Many analysts are predicting the next 10 years could also prove a trickier period for stock market investments. What’s that feeling based on?

A good starting point is a recent analysis by Goldman Sach’s Peter Oppenheimer, who looked at the common characteristics shown by equities markets during the 75 years the three long bull runs all took place during. He identifies 3 qualities he argues laid the foundations for these bull markets.

Oppenheimer argues that stock markets stand today, after the rapid V-shaped recovery (U.S. markets are now considerably higher than they were 2 years ago while most other developed markets have broadly recovered) from the coronavirus crisis sell-off in early 2020, show none of these qualities.

Valuations, either based on earnings or dividing a company’s economic output by the value of issued equity, are about as high as they have ever been in stock market history.

Average profit margins are currently very strong, having trebled from 4% to 12% over the past 30 years thanks to favourable conditions including tax, light-touch regulation and labour markets that have benefitted from waves of immigration into developed economies. Most analysts think it unlikely that trend can continue in the same way over the next decade or longer.

Interest rates are hard to predict but look like they are heading upwards. It is very unlikely the cost of capital will be as low over coming years as it has been over the past 30 or 40 years.

Oppenheimer’s conclusion is average returns can be expected to be lower over coming years and investors who passively track indices will have to accept that. He argues generating the kind of impressive returns passive investing has delivered over the recent bull market will require an active investment strategy that successfully rides trends like tech sector growth.

The good news is Oppenheimer believes there will still be strong returns to be made by successful stock and thematic fund pickers. At the very least, he expects equity investments, or at least the right equity markets investments, to outperform fixed income investments like bonds over the next decade.

One scenario some analysts expect to unfold over the next few years is stock markets in Europe to close the gap that has opened up with the USA over the past decade. The major U.S. indices have returned about 6% a year since the financial crisis, before compounded growth. Europe’s have stagnated, with returns mainly relying on reinvesting dividends.

European stock markets should close some of the gap that has opened up as they become more tech-focused – something we have seen starting to happen in London over the past couple of years. The cyclical industries that currently dominate European stock markets like commodities, energy, entertainment, travel, leisure, luxury, retail and hospitality should also have less to deal with than they recently have.

The ‘tech’ sector we refer to today has become hugely broad and covers everything from biotech companies developing next-generation pharmaceuticals to mobile gaming companies. Basically, any company whose business model and prospects rely on the quality of the technology and value of the intellectual property (IP) it produces is a ‘tech’ company.

Relatively few new public companies do not describe themselves as tech companies these days. Tesla is considered a tech company and has the huge valuation multiple that comes with that tag. But General Motors and Ford are not despite the fact they are also spending billions developing electric vehicles technology.

The category ‘tech stock’ is becoming meaningless and that could see it fall out of use over the next decade. Almost every company will be a ‘tech’ company by today’s definition and the result could be a return to greater scrutiny of more traditional metrics like sector, business model and margins.

Markets are unlikely to be as generous to all ‘tech’ stocks for much longer and investors will have to be more careful about which growth stocks they bet on. Actual revenues, rather than hoped for future revenues, may well come back into fashion when it comes to valuing companies.

There will be more concrete trends over the next decade that can’t be foreseen now. And even those which do seem most likely may not come to pass. But Oppenheimer is right that we do not currently see the conditions that are usually associated with bull markets. Unless stock markets break from historical precedent, which can’t be discounted as a possibility, it does look like the period ahead will be less straightforward for equity-based investments than the decade leading up to the Covid-19 pandemic.

And that means stock market investors might have to consider a more active approach if they hope to maintain the same level of returns they have enjoyed for much of the past 75 years.